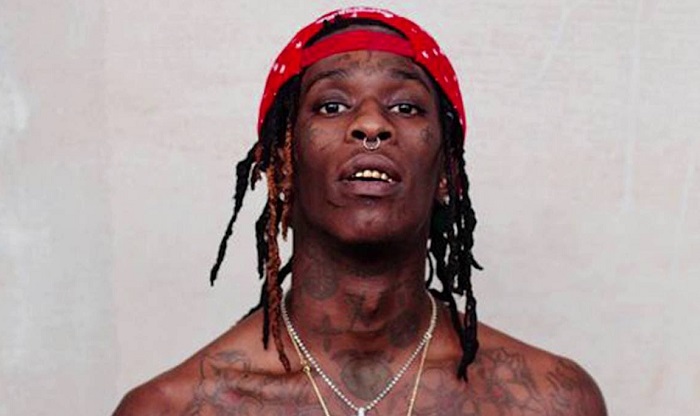 Young Thug, whose real name is Jeffrey Lamar William, is a prominent rapper and a skilled songwriter from the US, especially popular for his unorthodox way of rapping and his Bob Marley like voice.

Young Thug is especially famous for his extraordinary fashion choices and the fact that he is always filled with shiny and big pieces of jewelry.

He was also named Thugger Thugger, No My Name is Jeffery and Thugga. His many names appear in the media in all types and people know him because of his many talents.

Young Thug was born as Jeffrey Lamar William on August 16th, 1991, in the town of Atlanta, settled in Georgia in the United States.

His family was very big and he could never say that he was lonely growing up alongside his ten siblings whom he loves.

His family had problems and issues like most families, especially if they are big and they have financial problems.

But he always emphasized that everything was easier with his siblings around and they kept each other close. They have a good relationship and this meant that they hung out together often and rooted for each other.

His childhood years were spent in the block of social buildings that was called Jonesboro South.

Interestingly enough, this poor borough was also a home of a few other rappers who succeeded in getting on the map, like Waka Flocka.

He had self-esteem issues when he was a kid because his teeth had such an ugly color that he often covered his mouth while speaking and rapping.

Young Thug started rapping and making rhymes in 2010 when he was 19 years old, which is considered quite late for a rapper to start.

The majority of rappers got involved in hip-hop while he was a young teenager, mostly in the high school period. Some started rapping even before high school.

Jeffrey suffered a great personal tragedy when Bennie, his older brother,  was killed in a drive-by shooting. He was just a kid in elementary when he became the witness of his brothers shooting which changed him inside.

He turned to music to heal himself and get over the tragedy he experienced. After a period of hiding in the room in disbelief came the period of anger which eventually led him to the detention home.

He made a huge problem after he started arguing with his teacher from school, breaking his arm and showing his aggressive side most of the time during the class.

This was a very rough time for him and it wasn’t that pleasant to spent most of your teenage years in a correctional facility. He said that this changed his life a lot and he decided to switch it up after he went out.

That is the reason why his education was never finished completely. He said that he doesn’t feel sorry because he knew it wasn’t for him after all.

Young Thug had the unfortunate to be surrounded with people who preferred easy money over work so he looked up to them. Soon he developed a bad habit and addiction and became a notorious gambler.

In order to find the money for gambling, he turned to crime and robberies were his easiest way to come to some cash quickly.

He also got involved in selling and consuming drugs but fortunately, he never became a serious user.

It was normal for him to walk into stores with minimum security and rob them. For example, he robbed a cosmetic shop and spend all the money he stole in a casino. Because of these things, he had trouble later in life because people started to dig out controversy.

He did love to rap and make music but he would never succeed in making it a career for himself if it wasn’t for Atlanta’s most known rapper named Gucci Mane.

Gucci liked his music and mixtapes and recognized his rapping as something new on the hip-hop scene.

Young Thug became his protege and signed directly to his label. This mixtape was named “1017 Thug”. It did pretty well for a starting artist, especially for one that didn’t have a big social following.

This interesting mixtape was received extremely well and he became an interesting man to watch in the following months and years.

In 2013, Thug released his first official song titled “Stoner”. The single was huge. A lot of respectable artists worked with Thug on it: Jadakiss especially praised Thug’s work and were pleased that they made the remixes.

But Young Thug wasn’t that pleased by it.

He named his album “1017 Thug” and the best-received song on the album was “Picacho”.

This track made a great success back in 2013 and “Rolling Stone” magazine has put him on the list of artists to follow.

This became a very positive thing for him since he received a lot of publicity and gained a wider audience for his music. He was very pleased with his ratings.

He was on the 25 New Rappers to Watch Out For list in 2013. This is one of the things he is really proud of.

It was in 2014 that the rapper started collaborating with the respectable rapper named Kanye West who praised Young Thug and his work so Young thug became known throughout the country and wider.

In 2014, the rapper signed to a label named “300 Entertainment”, but he soon transferred to Atlantic.

In 2014, he was a guest on a comedy talk show named  The Tonight Show Starring Jimmy Fallon.

Young Thug liked collaborating with Kanye and he also appeared on his album.

Having Kanye’s support made him easier to build his own rapping career.

Some Thug’s work leaked the internet before they were released and it made him angry since he didn’t want to lose money over it. He always speaks about how he hates hackers.

He created a record label for himself at the end of 2016. The label was named YSL Records which was also considered as a controversy.

He was featured on Drake’s „Sacrifices” and on Calvin’s „Heatstroke”.

Drake was pleased because he was chosen to produce Thug’s new mixtape titled   „E.B.B.T.G”. Drake made sure he promotes the album himself on his social media.

In 2016, Young Thug became a model for Calvin Klein’s fashion campaign, alongside Frank Ocean and others, and it was obvious that he liked it very much. he got involved in a controversy in 2016, after the release of his new mixtape named Jefrrey, for whose release he changed his name to Jeffrey for 7 days.

He made a scandal by being featured on the cover of his mixtape in an androgynous dress, made by a known Italian designer which caused rage in a part of the underground hip hop scene. This art cover went viral and caused thousands of responses all over social media and on online platforms.

One of his most successful collaborations was the one in summer 2017 when he made a collab with Camila Cabello. Her big hit single “Havana”, on which he was featured went to No.1 on the Billboard Hot 100. This single put him into No.1 spot for the first time in his career.

In 2017, he released an EP made in collaboration with DJ Carnage and it was named „Young Martha“.

A month later he released another collaborative work, this time with Future which was released in a form of a mixtape named Super Slimy. Offset guest appeared on this tape.

in 2018 he released a single named  “Ride for Me”, which was again a collaborative work with A-Trak and Falcons.

Youn Thug was also one of the songwriters and vocals on a hit single „This is America“, by Childish Gambino. This single went to No.1 on the Billboard Hot 100.

In the summer of 2018, he has released another album, this time named Slime Language.

His newest creation is the single titled “The London”, which is the lead single of his new work named  Gold Mouf Dog.

Young Thug stated that his biggest influence in making music is Lil Wayne but this became a problem since Lil Wayne didn’t like Thug’s music and character so he was angry because he used his name a lot and stole part of his songs in his work.

Youn Thug likes to be in the center and he also wears clothing which can be worn both by male and female. He also has his septum pierced and has a lot of tattoos all over his body.

Young Thug has a girlfriend named Jerrika Karlae. They met while he was in the studio where she accidentally came to be the company to her mother who is a music manager. She is managing Young Dolph. Their engagement was announced in the spring of 2015.

Jerika is a businesswoman and has her own line of swimsuit line which is very successful.

The two of them have an on-again-off-again relationship caused by the fact that Young Thug cheated on her for a few times. their relationship is very dramatic and although they are together now it seems that they are working out their problems.

There were also tweets going on and off in 2017 when she caught him cheating on her. Her tweet was that she was definitely back on the market which meant that she will start dating other people and he made a very threatening answer: “What market? Bitch u gon die.”

Jerrika appeared in his video for a single “Worth It” and was very well liked by his fans.

„Family Ties“ is a tape released by his sisters who are also entering the world of music. He is always supportive of the family members and tries to help them in any way.

He has six children but they are not all from the same mother. When he has an interview, he avoids topics like that.

Jerrika and he are probably going to be married at some point but this is not a certain thing. They have an unstable relationship although he posts great photos of the two of them lately.

His brother got involved in very criminal acts. His name is Unfunk and he is still in jail due to the fact that he committed a murder. He is still in contact with him although he knows that he will be in there for a long time.

It is interesting that out of his 10 siblings just one sister has the same parents as he does. All the rest of the children are his half-siblings but he is not making a problem out of it.

Kanye West likes his style of rapping very much and compares it to the way Bob Marley sang.

He had been arrested once in 2015 after he attacked a guard in a store where he was shopping for clothes.

He is a huge fan of Lil Wayne and Rihanna. He respects their unique work and is especially happy for their fashion statements.

“Let Me Live” is his tribute song to a young man called Trayvon Martin, who lost his life in a racial shooting.

As for his diet and training, he does have a boxing trainer and he likes to put out his aggression and steaming out that way.

He is not really worried about what he eats or does he eat at all because he stated that sometimes he doesn’t eat for days because he feels no hunger. He does it a lot of junk food and is not worried about his nutrition or health.

This caused him to receive vitamin injections a few times due to his poor nourishment.

In the summer of 2016, Young Thug gave his father a beautiful birthday present in the form of a new car worth $60,000.