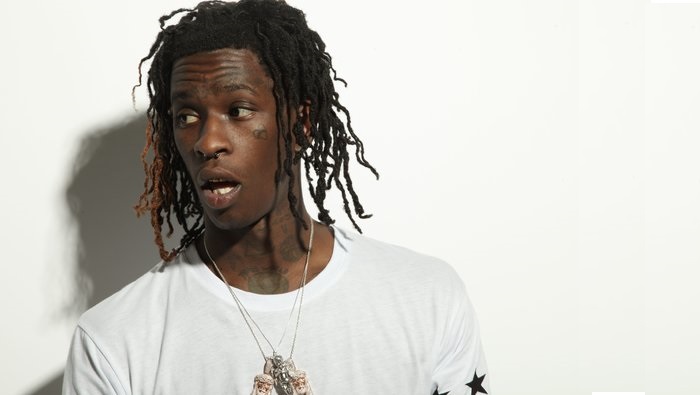 Young Thug (real name Jeffrey Lamar Williams) is an American rapper and songwriter known for his unconventional rapping style. He is also very known for his interesting fashion outfits and jewellery.

He was born on August 16, 1991 in Atlanta, Georgia in a very big family; he has ten siblings. Jeffrey said that his brothers and sisters were oftenly the only thing that kept him looking forward anf trying to solve problems at home, which were no strangers to most of his childhood.

He lived his childhood in the Janesboro South social buildings which was also the home of some other known hip hop arists such as Waka Flocka Fame and PeeWee Longway. He made friends, but oftenly got in trouble so he had to stay away.

He began rapping in 2010 which is quite late. Most rappers started rapping in elementary school or in their early teens. Jeffrey didn’t have the opportunity to do that since he was always distracted by problems of a kind: his family, his financials and taking care of his siblings.

He lost one of his brothers, Bennie,  in a shooting accident while he was still in elementary school. It was a horrible experience for him since he witnessed the shooting himself and he saw his brother die. This left a huge mark on Young Thug and he had to stay home a lot, mostly alone with music, to make peace with the fact his brother is gone.

He spent four years of his teen life in a detention home. He got into an argument with his school teacher and broke the teachers’ arm. Since he ended up there, he never finished his education completely.

Young Thug was noticed by Atlanta’s known rapper Gucci Mane who heard his mixtapes “I came from nothing” and got interested in his way of rapping.

Young Thug signed a contract with his label and released his  mixtape called “1017 Thug”.

The mixtape gained positive feedbacks and was very popular because of Thug’s refreshing style of rapping.

In 2013 he released a debut single called “Stoner”. Jadakiss, Wale and Jim Jones are one of the many hip hop artists who made a remix of this big hit single. Young Thug didn’t approve it and he often pointed it out that he didn’t want other artists to make alternative versions of his work.

“Picacho” was the best single from his “1017 Thug” album and it was named as one of the best 100 tracks in 2013 by the magazines “Rolling Stone” and “Pitchfork”. This helped Young Thug to get recognized in his genre since he gained fans from fanbases of these rock and hip-hop music magazines.

In 2014 he recorded a few songs with Kanye West (worldknown American rapper) and due to Kanye’s praising of Thug’s work he widened his audience and became recognized all over the States.

In 2014, Young Thug signed to “300 Entertainment” label, but a little while after it he signed to Atlantic.

Young Thug continued his good collaboration with Kanye West as Young Thug featured on his 2016 album called “The Life of Pablo”. Being love by Kanye, who is not only oftenly grumpy, but also a perfectionist, is a rare thing and this pushed Jeffrey to the top charts of his genre.

He released numerous singles and mixtapes through that period due to the leak of his songs on the net. To minor the damage of leaking he started releasing songs on a weekly base. He says that he hates the way that hackers humiliate artists by leaking and therefore stealing the content they make and work hard for.

In the fall of 2016 he started his own label and was one of the vocals on Drake’s and Calvin Harris’s songs.

Drake was the producer of his 2017 mixtape called “Beautiful Thugger Girls”. This mixtape became enormuosly popular among his fans and the fact that Drake promoted it gained him even more attention.

Lil Wayne is known to be Young Thug’s biggest influence and Thug was going to title his album in his honor. Lil Wayne was against it and even turned to his fans asking them to ignore Young Thug and don’t listen to his music any more.

This didn’t cause any larger scandal since Young Thug didn’t want to put any hate on Lil Wayne.

He likes being controversal, such as when he proclaimed himself of being homosexual in the same period he got himself engaged to Jerrika Karlae.

How did the two of them meet? She was with her mother in Gucci Mane’s studio  because her mother is the music manager of another artist named Young Dolph. They started to date and got engaged in April of 2015.

She was featured in her fiancee’s music video for his hit song called “Worth It” and the fans absolutely love her.

His sisters Dora and Dolly are also music artists. They released their debut EP “Family Ties” and were featured in Thug’s single and video “Best Friends”. He is very supportive to all of his brothers and sisters and always tries to give them attention by posting and sharing their content on social media.

Pet own: one dog

He was a model for Calvin Klein in fall 2016, which is not surprising because of his own interesting fashion style.

As a child, his teeth were so discolored and bad that he covered his mouth when he was speaking because he was embarrased of them.

He is a father of six, but the children came from four different women and Jeffrey doesn’t like to address that.

He is in still a relationship with Jerrika Karlae and they are still engaged. There was a rumour they were going to get married after Young Thug releases his new album, but nobody knows is it really true.

One of his brothers called Unfunk is in jail because he comitted a murder.

He was on the 25 New Rappers to Watch Out For list in 2013. This is one of the things he is really proud about.

His brothers and sisters have different fathers, so he has only one true sister, the rest of them are half siblings. He doesn’t discriminate any of them and loves all of his siblings equally.

He left elementary school in the 6th grade after what he was expelled from school. He was expelled because he was so violent to his teacher and even broke his arm.

He became a notorious gambler in his teenage years, and soon turned to drugs and robberries.

He became a father at the early age of 17 and says he doesn’t regret it, although he thinks young people should be more careful than he was.

Kanye West compared his style to Bob Marley’s. Kanye is his huge fan.

In 2015 he was arrested for threatining a guard at one Atlanta’s mall.

He once robbed a cosmetic salon asca teenager and ran away with a few thousand dollars and spent all of it in one day gambling the money away.

His favorite music artists, other than Lil Wayne, are Rihanna, Usher and Frank Ocean.

He made a song called “Let Me Live” as a tribute to Trayvon Martin, a teenager who was shot to death in a racist shooting.

He is known for his speed in writing lyrics so he is very productive in this field.