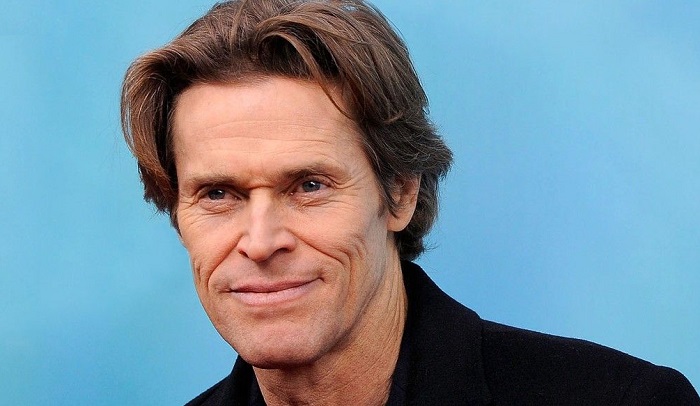 Willem Dafoe is an actor from the United States that is praised amongst the critics and has received four Academy Awards nominations and also three Golden Globe nominations for his work.

Back in the day, he was a member of The Wooster Group, a theatre company with whom he did several productions.

He made his acting debut in 1980 in Heaven’s Gate but he was unfortunately fired during its production.

In 1986 he received his first Academy Award nomination with the role of Sergeant Elias Gordon in a movie Platoon. After that, he was Jesus in The Last Temptation of Christ and was also in Mississippi Burning

In 2000 he was again nominated for an Academy Award for his movie Shadow of the Vampire in which he played Max Schreck.

Since then he was in many known movies like Spider-Man from 2002 and The Fault in Our Stars and John Wick from 2014 and also in the Murder on the Orient Express from 2017.

He voiced a lot of characters throughout his career and some of the movies he worked on are Finding Nemo from 2003, Finding Dory from 2016, Death Note from 2017, and so on.

He also played parts of real-life people like Vincent van Gogh in At Eternity’s Gate from 2018 for which he got an Academy Award nomination.

Willem was born on July 22th in 1955 in Appleton, located in Wisconsin in the US. His full name is William James Dafoe.

His mother is Muriel Isabel and his father is Dr. William Alfred Dafoe. He has 7 siblings, five sisters, and 2 brothers.

His father was a surgeon and his mother a nurse so they weren’t at home a lot and the children raised themselves.

One of his brothers Donald is a transplant surgeon and a researcher.

He is of English, German, Scottish, Irish and French ancestry.

When he was in high school he was nicknamed Willem and people still call him that.

He went to the University of Wisconsin – Milwaukee and after only a year he joined a theatre company called Theatre X there.

In 1976 he decided to move to New York. There he met a theatre group The Performance Group and together they made the Wooster Group.

In 1979 he got a supporting role in Michael Cimino’s Heaven’s Gate. He played a cockfighter but was removed from most of the film.

In 1982 he was in The Loveless where he played an outlaw. This is his first film where he had a leading role.

He was in a horror movie The Hunger from 1983. After that, he was in an action movie Streets of Fire from 1984 in which he played a leader of a gang.

In 1985 he was in Roadhouse 66 alongside Judge Reinhold.

After that, he was in a thriller called To Live and Die in L.A. where he played Rick Masters.

In 1986 he was in a movie Platoon and played Sergeant Elias Gordon in it. This was shot in the Philippines and he had to train for the role.

For this movie, he was nominated for the Academy Awards in the category of Best Supporting Actor but Michael Caine eventually won it.

In 1987 he gave his voice for a documentary Dear America: Letters Home from Vietnam.

In 1998 he was in Off Limits, another movie about Vietnam War.

The same year he was in a drama „The Last Temptation of Chris“ with the role of Jesus. This movie was controversial because it didn’t portray Jesus in the same way as the bible did.

That year he was in a crime thriller Mississippi Burning where he played an FBI agent.

In 1989 he was in a drama Triumph of the Spirit and played a boxer Salamo Arouch in it.

That year he had a small appearance in Born on the Fourth of July where he was a wheelchair veteran.

Willem had a cameo appearance in the 1990’s Cry-baby.

In 1993 he was in a thriller titled Body of Evidence where he acted alongside Madonna. He played a lawyer who is having a relationship with the woman he is defending.

In 1996 he appeared in three movies. One of them was in a drama called Basquiat. He was in The English Patient, which was filmed in Tuscany. He was also in Victory, another drama.

In 1997 he played a villain in Speed 2: Cruise Control with Sandra Bullock. This movie wasn’t received well at all and he got the Razzie Award for Worst Supporting Actor. The same year he was in Affliction.

In 1997 he voiced a character in an episode of The Simpsons. The episodes’ title is „The Secret War of Lisa Simpson“.

After that, he again played a villain this time in Lulu on the Bridge.

In 1998 he was in New Rose Hotel, a drama film. In it, he starred alongside Christopher Walken.

In 1999 he had a role in Existenz by David Cronenberg which is a science fiction thriller. He played the role of Gas in it.

The same year he appeared in The Boondock Saints. This movie was highly criticized for its violence. This movie wasn’t successful in the box office but has been branded as a cult movie.

In 2000 he was in American Psycho with the role of a private investigator.

His next movie was Animal Factory by Steve Buscemi. He played a con-am in it. He was praised for his performance in this.

The last movie he did that year was Shadow of the Vampire, a version of a horror movie called Nosferatu from the 1920s. He performed alongside John Malkovich in it and Dafoe was highly praised for this movie.

In 2001 he had a leading role in Pavillion of Women where he played a priest from China.

In Edges of the Lord he again played a priest, but this time the priest was helping a boy seem Christian during the Nazi occupation.

In 2002 he was in Spider-Man where he played the main villain, the Green Goblin.

The same year he was in Auto Focus where he again collaborated with Schander. He played John Henry Carpenter, an electronics expert.

In 2003 Dafoe gave his voice to a fish called Gill in Finding Nemo, a famous Pixar movie.

He was also in Once Upon a Time in Mexico as a drug lord.

The last movie he did that year was The Reckoning.

In 2003 Willem gave his voice to a villain called Nikolai Diavolo from a James Bond video game called James Bond 007: Everything or Nothing.

In 2004 he did The Clearing, where he played another villain.

Willem was again in Spider-Man 2 in 2004 where he reprised his role.

He was in a comedy movie The Life Aquatic with Steve Zissou directed by Wes Anderson.

He also played a magazine editor in Aviator where he acted alongside Leonardo DiCaprio.

He also did a drama Manderlay and he was in Before It Had a Name. Not only did he star in that movie but he ačsp cp-wrote it with his wife Giada Colagrande.

He played the role of a museum curator in Ripley Under Ground.

In 2006 he was in Inside Man where he played a veteran captain. He also appeared in American Dreamz as the White House Chief of Staff.

In 2006 he was in an anthology film called Paris, Je t’aime.

In 2007 he had a role in Mr. Bean’s Holiday and worked with Rowan Atkinson.

After that, he was in Go Go Tales where he was an owner of the strip club.

That year he gave his voice to a villain in a Japanese movie Tales from Earthsea.

He played the US Senator in The Walker and had the lead role in Anamorph, a psychological thriller.

In 2008 his movie Fireflies in the Garden premiered. He played in it alongside Ryan Reynolds, Emily Watson, and Julia Roberts. This movie was released in theatres in 2011. In it, he played an English professor.

In 2008 he was a Nazi officer in Adam Resurrected.

That year he was also in a drama The Dust of Time as a film director from the United States.

In 2009 he was in Antichrist alongside Charlotte Gainsbourg. This movie had a lot of graphic sex scenes in it.

He was also in a thriller called Farewell, and in My Son, My Son, What Have Ye Done?

He was in a horror movie Day Breakers with Ethan Hawke.

He also gave his voice to a character in Fantastic Mr. Fox.

In 2009 he was also in The Boondock Saints II: All Saints Day where he reprised his role. He was also in Cirque du Freak: The Vampire’s Assistant.

In 2010 he was in a thriller Miral and in his wife’s movie called A Woman.

That year he narrated a documentary Into the Deep: America, Whaling & the World. He also frequently gave his voice to Birds Eye mascot.

He was also in The Life and Death of Marina Ambramović from 2011.

In 2012 he appeared in John Carter. The same year he was in a thriller Tomorrow You’re Gone.

In 2013 he was in Odd Thomas, a supernatural thriller. He was also in a video game Beyond: Two Souls that year.

In 2014 he was in A Most Wanted Man as a private banker. The same year he was in a comedy The Grand Budapest Hotel and a crime thriller Bad Country.

Some of his newer movies are The Fault in Our Stars from 2014, Pasolini, John Wick, My Hindu Friend, Dog Eat Dog from 2016, The Florida Project from 2017and so on.

In 2005 he got married to Giada Colagrande, a beautiful Italian actress and director.