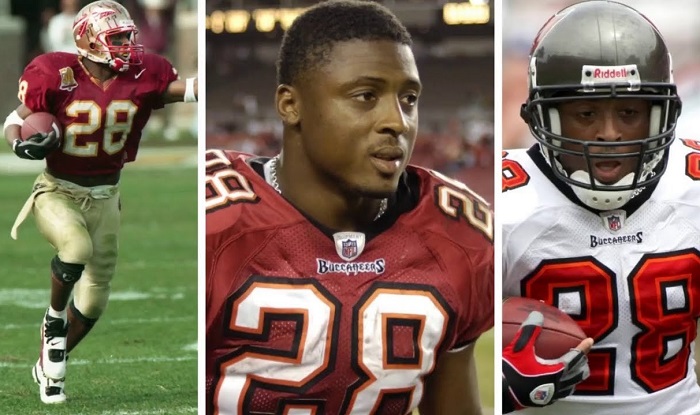 In a rich history of American football, one of the most famous players is most certainly Warrick Dunn. A player with a long and successful career is always associated with American football at its best. Known for his fruitful athletic achievements, numerous sports awards, Warrick also stands out as a writer and a big humanitarian.

His Net worth is somewhere between 11 and 14 million dollars, depending on the source of information.

He is successful in every way possible, but the main thing is that he remained a normal human being.

He is most famous for his charity work “Homes for the Holidays program” – with an idea to support single-parent families.

It is said that he had built more than 150 homes for single mothers.

Dun was the eldest of five children, raised by a working, single mother. He never knew his father and his mother was a police officer. On January 7, 1993, Warrick’s mother, named Betty Smothers, was attacked and killed by three armed robbers, leaving Dunn and his five siblings behind. Warrick was 18 years old at the time and as a result of that tragedy, became a father figure for the family. This unfortunate event determined a course of Warrick life and future career.

From early days, he showed interest in sports, particularly football, where he expressed talent from the start. He played in various positions, quarterback, cornerback and running back.

On his sophomore year, he managed to lead his high school team to a state championship, which was the first time in history. That event is marked as the beginning of his football career.

After finishing high school, he enrolled in Florida State University, where he continued to play football, even more successfully. He was remembered for running 1,000 yards in three straight seasons.

During his time at the University, he distinguished himself as a track and field star and became a member of  Florida State’s Men’s 4x100m where he accomplished great results including his personal best, 10.3 seconds in 100m. His jersey, with the number 28, along with many others, is retired by the University and displayed in Moore Athletic Center.

In 1997, he graduated and earned a bachelor’s degree in information studies.

After his graduation, Dunn was selected in the first round of 1997 NFL draft by the Tampa Bay Buccaneers where he spends the next four years. With the highly successful rookie season, he was named the Associated Press Offensive Rookie of The Year.

Among other achievements, he was selected to Pro Bowl team twice, in 1997 and 2000. In that season he made the best result in his entire sports career, 210 yards rushing against the Dallas Cowboys, making it 2nd most in history.

In the 2002 offseason, as a free agent, Dunn signed for Atlanta Falcons.

His time there was, once again, marked with personal engagements and more than positive impact on the team. That same year, he scored the most rushing touchdowns in his career (9) and led his team in rushing with 1,106 yards, repeating the latter in 2005.

For the third time in his career, Warrick Dunn was named for NFC’s Pro Bowl team. Looking on his entire career, his overall results are more than impressive. He only missed ten games due to injuries and has a total of 2,256 carries. Referring to combined rushing and receiving yards, Dunn has finished his first ten seasons with more than 1,000 of them.

In season 2007, Atlanta Falcons starting quarterback Byron Leftwich sustained an injury, spraining his high ankle, Dunn served as an emergency quarterback, behind his teammates Joey Harrington and Chris Redman, playing in that position for the first time after high school. In early 2008, on his own request, Dunn was released by the Falcons. A year later, having his career blooming and increasing financial gain, Warrick Dunn became a minority owner of the Atlanta Falcons.

In March of 2008, Dunn returned to his first club, The Tampa Bay Buccaneers, after more than ten years, signing a 6 million dollars contract. He spent a year with them and retired from NLF soon after as 14th in all-time in all-purpose yards with 15,306.

Referring to his known humanitarian work and philanthropy, Warrick Dunn established Homes for The Holidays program which rewards single-parent families with their first homeownership. The program was started in 1997, right after his mother’s tragic passing. In 2002 Dunn also started a similar concept, Warrick Dunn Charities, as an extended part of the original program and way to update and grow services. Throughout the years, homes for the Holidays helped more than 150 families by providing houses and safe living environment.

Dunn has stated multiple times that he and his Charity believe that children, raised in better circumstances can prosper in various ways, educational, cultural and social wise. The best example is probably Deshaun Watson’s case, where his family was selected for the program in 2006. Watson later became a quarterback for Clemson and won the 2017 College Football Playoff National Championship. He is still an active player today.

Speaking of his achievements and awards in his sports career, as well as his social engagements, it’s hard not to mention a Giant Steps Award he received directly from Bill Clinton.  In 2005, The Walter Payton Man of The Year award was presented to Dunn.

It is the only NFL award that recognizes a player not only by his professional contributions but also his community service. After Hurricane Katrina, Dunn made his efforts to help and did so by collecting more than 5 million dollars in donations.

Dunn, along with a number of other athletes, including Andre Agassi, Muhammad Ali, Tony Hawk, Lance Armstrong, to name a few, founded an organization called Athletes for Hope. The Charity primarily helps workers in the sports industry, fans and professional athletes to join and be more involved in charitable causes.

In 2008, Dunn wrote his autobiography called “Running for My Life”, detailing his personal life and struggles, especially his battle with depression and the most tragic moment in his life, his mother’s death. She was murdered by five armed robbers, where three of them were sent to prison and two on death row. In 2007, ten years after the event, Dunn visited one of the killers and offered his forgiveness.

Speaking of his mother’s death and the effect it had on him and his family in an interview, he stated that he never really had a childhood, taking over the head of the family role and taking care of his younger brothers and sisters. He was only 19 years old when the event happened and being a teenager, and he was never able to do what his peers did at that age.

They needed a lot of support, and the city of Baton Rouge helped them, starting a fund for the family, so they could survive and pay the bills.

This meant a lot to Dunn, who then understood what it means to help a person in trouble and always decided to give back to his neighbors and the community.

He always mentions his what his first coach said to him, challenged him, to be exact, is that you always have to give back and help the disadvantaged, if you want to live and thrive in a community like theirs.

The coach’s challenge was the initial step in his career, and the first three houses were built as a part of his Homes for The Holidays program.

The program, partnered up with Dunn and his Warrick Dunn Charities, are still actively contributing and working to help others, even after Dunn’s retirement.

He is worth around 11 million dollars – he has a notably prosperous career in the football league, he has also had stakes in a professional team in an association.

He wrote a book, but maybe the most important part of his career is the fact that is he is so much involved in humanitarian work, and that despite his personal struggle he has managed to stay to the top.