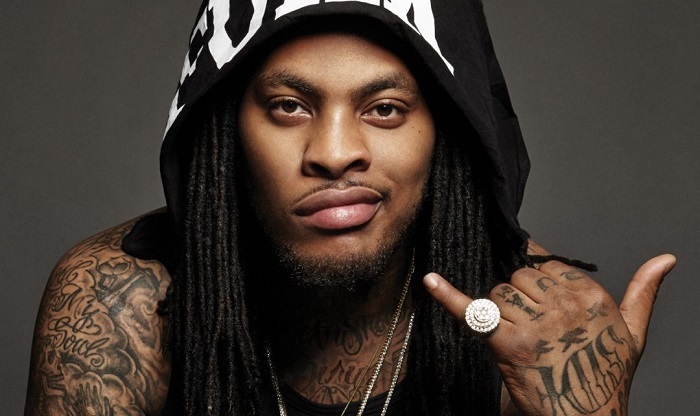 Juaquin Malphurs is also known to the public by his art name Waka Flocka Flame. This interesting person is an American rapper that became extremely notorious after making a few awesome hits.

Waka Flocka is a part of the 1017 Brick Squad hip hop group.

Waka Flocka Flame was born on May 31st, 1986 in South Jamaica, in Queens, the United States by the name Juaquin James Malphurs.

His family soon moved to Riverdale in Georgia. His mother, called Debra Antney is Gucci Mane’s previous manager and the leading director of So Icey/Mizay Entertainment so she has been in this industry for a while and knows how the business works.

A word „Waka“ which is a part of his stage name comes from his cousin who started calling him that after they discovered the catchphrase „Waka Waka” from the Muppets which was frequently repeated by Fozzie.

The „Flocka Flame“ was given to him by his friend, an extremely popular rapper named Gucci Mane whom he has known from his early days because he had made business with his mum.

Joaquin came to fame after his single “O Let’s Do It” was released in 2009, and the single entered the US Billboard Hot 100 chart which is the most notable US chart for music.

Waka Flocka was one of the five rappers included in a rap group alongside his mother’s protege Gucci Mane and three other rappers: Wood Da Kid, Frenchie, and OJ Da Juiceman. Their group had troubles with finding the name they all liked but the eventually agreed on 1017 Brick Squad.

He released his first album in the fall of 2010 by the name „Flockaveli“, playing with a part of his stage name.

It went as high as number six on the US Billboard 200 chart. He said that he was inspired by musicians such as Tupac Amaru Shakur, also stylized 2Pac, for this album. Tupac’s stage name before his shocking death after a shooting was Makaveli which inspired the title „Flockaveli“.

In 2010 he entered the Top 10 list of the best MC’s of the year which was a great honor for him, especially because of other big names that run for the same title.

In 2010, he appeared in a comedy talk show  called The Mo’Nique Show and it was his debut appearance in a TV show.

Although Gucci Mane eventually stopped his business collaboration with Waka Flocka’s mother so she had to resign from her position of a manager, the two of them remained associates. This showed the maturity of both of them.

He stated so in an interview he held with an MTV employee. He said that their relationship was good during that period of time although they didn’t speak to each other much and did,t go out together so often.

Gucci Mane was also seen at Flocka’s successful listening party for his new album „Flockaveli“ in September that year. They were still supporting each other no matter the prior happenings.

In 2011, Waka Flocka got involved in the shoot for PETA which aimed against killing animals and using them for fur. The photo developed in this shooting revealed Waka nude but with explicit areas covered. The cover sad „ink not mink“.

In 2011, Waka Flocka has been spending a lot of time in the studio so released a few new mixtapes. Some of them were Salute Me or Shoot Me 3 and Twin Towers 2 (No Fly Zone) with rappers and also his two friends Slim Dunkin and Benjamin Flocka.

In August 2011 he released a well-received album made again in collaboration with Gucci Mane, and the album was called Ferrari Boyz. One of the songs from the album titled “She Be Puttin On” was featuring Slim Dunkin who was unfortunately deceased at the time of the release of the album.

He was yet another rapper who was shot, this time in Atlanta, in his recording studio.

He released a popular „Round of Applause” that featured Drake one month after the release of his album. The first song of his new album had a very interesting name because it was called Triple F Life: Friends, Fans & Family. It was produced by a very capable producer titled Lex Luger. The album was released in the summer of 2012.

In January in 2013, Waka Flocka stated that he is finally done with making his 3rd studio album called simply Flockaveli 2. He announced that there will be some great guests like Wyclef Jean and Timbaland featured on this new album.

He also stated that it is again produced by the same man: Lex Luger, alongside TM88, Southside, and more other respectable producers.

In February in 2013, he released a mixtape called DuFlocka Rant 2 that had a guest appearance of another prominent rapper named Lil Wayne. This time there were many other new guests on the album like Gucci Mane, Ace Hood, French Montana and Young Scooter with many others.

His album Flockaveli 2 got a new release date for 2014, but before 2013 ended he has released one more mixtape called From Roaches to Rollies. Waka Flocka stated that his album „Flockaveli 2“ was going to feature a lot of musicians but already made collabs were with Ne-Yo and Drake.

In March in 2014, he released another mixtape, called Re-Up.

In an interview with the prominent hip hop magazine titled XXL in the summer of 2014, he verified that some of the producers will be Black Metaphor, Mike Will Made-It, and his faithful producer Lex Luger.

The front cover art of his Flockaveli 2 album was released by the end of the year.

In 2014 he appeared on VH1’s show called Love & Hip Hop: Atlanta, in its the third season to be exact. The show followed his life and his relationship with his beautiful wife, Tammy Rivera.

The couple also announced that they would be a part of another reality TV series, but this time it will be their own spin-off called Meet the Flockas.

In 2015, Waka Flocka released a mixtape made in collaboration with DJ Whoo Kid called The Turn Up Godz Tour. It featured guest stars such as Howard Stern and Offset.

In April 2015 his new mixtape called Salute Me Or Shoot Me 5 hit the stores and it included stars like Yo Gotti, Future and Juvenile. He released another mixtape named Flockaveli 1.5 in November the same year.

In January in 2011, Waka Flocka turned himself to the police in Atlanta and got charged for possession of illegal substances that included marijuana and hydrocodone. He also had a firearm and he violated his probation after his driving license was taken. He was released 2 days later after he paid bail.

He was arrested again in October 2014, at Atlanta International Airport after the workers found a  handgun hidden in his luggage.

In March 2013 Gucci Mane announced that Waka Flocka is no longer a part of the 1017 Brick Squad Records. The two former associates started insulting each other over Twitter after this news have been publicized.

Although it was stated that Gucci’s account was hacked, Waka never believed it at all.

In March 2013, during his interview for MTV, Waka Flocka explained that he doesn’t plan on having any more music collaborations with Gucci Mane again. None of the rappers actually explained where does the controversy come from. Waka stated that they just went separate ways and that the reasons don’t matter.

But Waka couldn’t just let it go so in October 2013 Waka Flocka made a diss track against Gucci Mane. It was titled „Ice Cream“.

In November the same year, Gucci Mane took Waka Flocka Flame and his mother and some other of his former collaborators to the court. They were accused of fraud and breach of contract and he even told that he was a victim of racketeering.

Gucci Mane stated that Waka Flocka’s mother, Debra, gained control over the whole 1017 Brick Squad Records without Gucci mane knowing anything about it and created divided individual labels with it. Gucci also said that she stole his royalties and that she always inflated all the costs so she could take more money.

He also revealed that she took more than 20 percent management fee, which is the percentage usually taken by managers. Gucci Mane stated that Debra and her management got him in the place where he owes tax.

In September in 2014, Waka Flocka Flame posted an old picture of him and Gucci Mane and written in the bottom “… #NoBeef „. With this, he confirmed that they finally have made peace with each other.

In February 2017, he appeared on BBC radio and gave an interview where he shared some insights about his relationship with Gucci Mane and questioned his cred.

He said that it isn’t possible to do a reunion of the Brick Squad. Few days after that, Waka released a diss track called „Was My Dawg” against mane and even had a ketch of him on his covers.

At the beginning of the year 2010, he was shot and robbed while he was in his car in Atlanta. He was shot through his right arm and had to be hospitalized. This was a scary incident not only for him but for his mother and brother who love him very much.

Waka Flocka had a hard time in 2013 because his brother and a rapper KayO Redd killed himself in December at his home in Georgia.

Waka Flocka talked of this tragic event in January in 2014 and said that it was very hard for him. He stated that he felt like he needed to cleanse himself, change his diet and stop eating so much meat. He said that his brother was really stressed which probably caused the tragic event. He said that he made peace with it and learned how to keep on living.

Kat Stacks is one of the girls rumored to have been with Waka but it was never confirmed.

In May 2014 Waka Flocka Flame married Tammy Rivera. She is a television personality. She has a daughter named Charlie Rivera from before their marriage, but Waka Flocka didn’t mind it.

However they went separate ways in June, 2016.

Other than his late brother KayO Redd commited suicide on December 29, 2013 he also had a brother Rahleek who died in 2000.