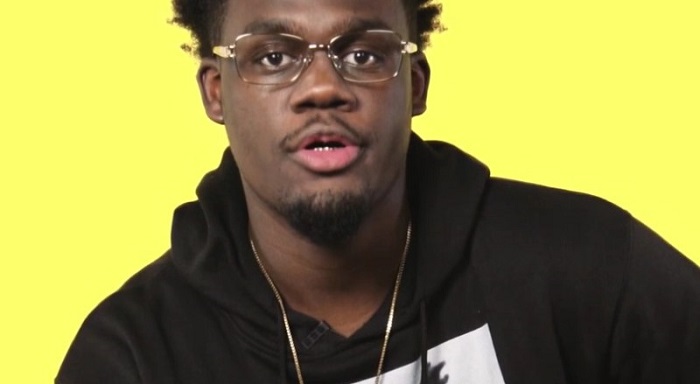 Ugly God is an American rapper and a producer known for his hit single “Water” released in 2016. He is known by his contempt to expensive things.

Ugly God is a stage name of Royce Davison who was born on September 19, 1996 in Indiana in USA.

When he was in school he called himself by a different name: Pussy Bacon but after the 10th grade je changed it into Ugly God mostly because of his parents and because he was teased about it.

His family moved a lot so in the past he lived in Cleveland, Texas, Louisiana and Mississippi.

He released his first single “I Beat My Meat” in 2014 but it had to be taken down because the principal at his high school dodn’t approve it. It was later uploaded again but the school asked again to take it down so they did. That made the single even more popular.

After graduation he enrolled the University of Southern Mississippi in order to become a computer egineer. He wasn’t happy as a student so he dropped out quickly and focused on making music.

When he was a freshman at the University of Southern Mississippi he re-uploaded “I Beat My Meat” and from that period it stayed uploaded.

In 2016 he came out with a single called “Water” which was released on his SoundCloud account.

Later it was released by Asylum Records and the single went as high as number eighty on Billboard Hot 100 chart.

In 2016 he signed to Red Dragon label owned by iMakonnen.

In summer of 2017 he became one of the ten artists in “2017 Freshman Class” by XXL magazine, which is a notable misic magazine

His first mixtape called “The Booty Tape” was released in August 2017. The album features artists such as Ski Mask The Slump God and XXXTentacion. He was also featured on the 2016 Carnage single “RARI”.

There isn’t much to find about his personal life exept that he has a girlfriend whose pictures he posts on Instagram and her name is Edith R. He probably likes to keep his privacy away from the media.

After dropping out of college he founded a rap group called “Little Dick Qlique” with Famous Dex and Wintertime.

Unlike most of other rappers he likes to be fake and wear fake: his grill is fake, all his jewelry is also fake, just like his watches.

He has 700,000 followers on Twitter and Instagram. In 2016 he released a single which was a parody on Bernie Sanders, a presidental candidate and a senator. Everyone were surprised by this single because he wasn’t interested in politics and never rapped about it.

He made videos of himself grabbing lizzards, putting them on his nose and showed them on the Internet. This videos are the first thing that brought him online fans and wide attention on the Internet.

His biggest influence was Lil B, whose stage name is TheBasedGod and is also a known rapper. That is why a part of his name is God.

He is fascinated by Pokemon and lizzards, which is really surprising for a grown-up but he often mentions cartoons in his rhymes.

He lost his virginity at the age of 17, as he told to his fans who asked him on Twitter.

Ugly God is an American rapper who likes parodies and seems to be more humble than other rappers.