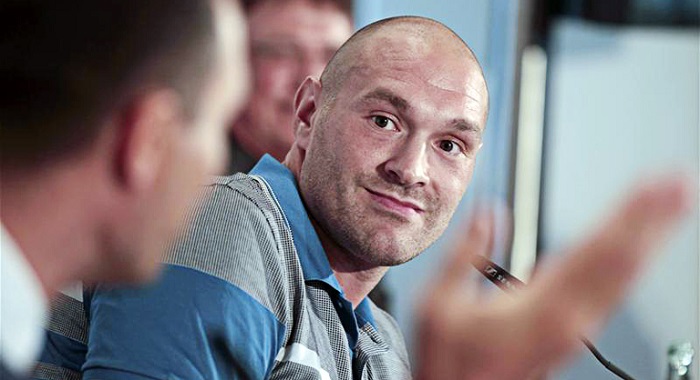 Tyson Fury is a famous British-Irish boxer who got famous after winning against Wladimir Klitschko in 2015.

He’s now retired from boxing although he constantly talks about returning to it.

Tyson Fury was born on August 12, 1988 in Wythenshawe, in Manchester, England.

His family is of Irish Traveller heritage, so one of his boxing nicknames was „Gipsy King“.

His father John was born in Tuam in a County Galway which is one of Ireland’s counties. His mother was born in Belfast.

The whole family origins in Gaelic. His father was also a professional boxer.

Many of his relatives were, and still are boxers, so it seems that Tyson is also born to become one.

When he started boxing in an amateur section he was boxing for Ireland and for England too. His first club was in Belfast which is in Northern Ireland, and later he relocated to County Monaghan in the South.

His international team fought against Poland and USA and although they have lost both matches, Fury himself won all of his fights in those matches.

In 2006, at the AIBA Youth Championship he won his first medal, a bronze one.

In 2007, he boxed for the representation of England on the EU Junior Championship and won. He was ranked on the 3rd plase during his Junior status. Fury turned to professional boxing due to his inabillity to join Junior Olympic Team.

In 2008 he became an ABA Champion. His Junior fighting years concluded in 31 wins and 4 loses. His professional career started with a debut in 2008 in which he won Bela Gyongyosi by Knock-out.

In 2010 he won a lot of matches by knock-out and was started to be recognized as an elite boxer.

He won a fight against Dereck Chisora (who was also undefeated till that time) in the fight for the British heavyweight title in 2011.

In 2012 he won Kevin Johnson in Belfast’s WBC title fight.

In 2013, he had his first USA debut against Steve Cunningham and won it in a very difficult fight. That brought Fury to the high 2nd place set by International Boxing Federation.

He fought for The Ring Heavyweight title against Wladimir Klitschko, a very famous boxer with no lost matches in 2015. Fury won after twelve rounds but he held the belt a very short period of time – 10 days.

In 2016 he was investigated for doping and he vacated his titles moving away from the media waiting to recover in the privacy with his family.

He started talking about returning to boxing in 2017 in a fight with Joshua, but in July the same year he posted on his Instagram that he is not retuning to boxing anymore.

Tyson is married and has two kids.

His wife Paris, is a housewife, and takes care of their children: daughter Venezuela and sons Prince John James and Tyson Fury Jr. She is very traditional, she cooks and cleans for their family and has no wishes to work, although she could.

Since she is from travelling stock too, she follows their tradition.

Paris and Tyson are in a relationship from their teenage years, and during his career she was always his rock and helped him a lot of times when he was coping with problems, such as when he was being banned from boxing in 2015.

Their wedding was in Paris’ home town Doncaster in 2005. He kept traditional Gipsy wedding, although a little smaller since he likes living quietly.

In 2014 his two cars, a BMW an a VW, became victius of arsonist, being torched in front of their house. The same year brought them another shock: Paris had a miscarriage.

Tyson is very religious. He is born Christian and follows religious rules and norms.

His father was in prison after a fight which caused another man to lose his eye.

Tyson Fury always claims that the gipsy in him makes him a great fighter and a person.

The Notebook is one of his favourite movies.

Due to his premature birth he was very small newborn.

He got his name after the famous boxer Mike Tyson.

Tyson is a very big Manchester United fan and has a lot of fan items which he collected by visiting their games.

Tyson Fury had a very succesful boxing career which was once interrupted by alleged accusations of drug abuse what almost ruined his career. He is known for his Gipsy roots and his Christian beliefs.