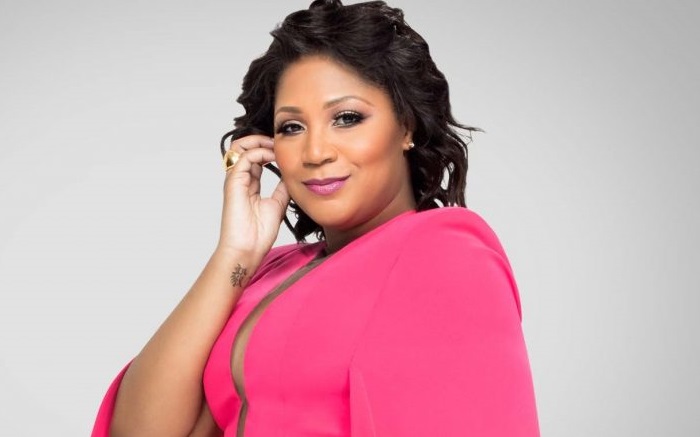 Trina Braxton is a singer, reality TV personality and actress from the United States. She has a famous older sister, Toni Braxton, an R&B musician.

Trina started being known in the music industry in 1992 when she founded The Braxtons R&B group with her sisters.

They soon released their first and last album titled “So Many Ways”. They lost two members and the group was a trio. Some of the hits from this album are “Only Love”, “Slow Flow”, “The Boss” and “So Many Ways” which is also the title of the album.

In 2011 she started being in a reality show for WE tv with her sisters. It was called “Braxton Family Values”. The first season was a big success for the WE tv, and they also did a second one.

Trina also dabbled in a solo career, and released a single “Part or Go Home” in March of 2012.

In 2018 she started hosting “Sister Circle”, a talk show on TEGNA and TV One. People who host this with her are Syleena Johnson, Rashan Ali and Quad Webb-Lunceford.

Since then Trina made her line of hair products and acted in a lot of movies.

Trina was born on December 3rd in 1974 in Severn, located in Maryland, US.

Trina has an older brother called Michael Jr that was born in 1963 and four sisters with similar names. They are called Towanda, Tamar, Toni, and Traci.

All of them were raised in a strict Christian family and were very religious. They started singing because they were in their church’s choir.

In 1989 siblings sing their first record deal and it was with Arista Records. At that time all of the sisters were together.

A year after that they released a single titled “Good Life”. This is the only single with all five of them. It wasn’t a big success, it was on No. 79 on the Billboard Hot R&B/Hip-Hop Singles chart. Because of age differences between the sisters, the record label decided to drop them.

In 1991 she became the first solo artist to sign for LaFace Records. They didn’t want to take the whole group because they just signed TLC to them.

After she left the group that year the rest of the girls from the group became her back up singers for her first US tour and also her music videos, etc. Tamar, Towanda, Trina, and Traci were also in a music video of Toni Baxton for a single called “Seven Whole Days” from the self-titled album she released.

In 1993 Bryant Reid, the Vice president of LaFace decided to sign The Braxtons to the label. Although they were signed they never released anything under this record label. He then took the group to Atlantic Records when he was positioned there

In 1995 the Vibe magazine reported that Traci Braxton left the group. She was allegedly pursuing her career as a youth counselor that she was passionate about. It was confirmed in 2011 that this wasn’t the reason. Traci couldn’t sign to Atlantic records because she was pregnant in that period. This was all revealed on The Mo’Nique Show.

In 1996 the sisters reunited and Trina along with Tamar and Towanda released an album. It was titled “So Many Ways” due to the name of its lead single. It was released in August that year and went to No. 26 of the Billboard R&B Hip Hop Album chart. It was their only long-playing album.

Bryant Reid was an executive producer of this album.

This album also had covered. It was of a song from Diana Ross called “The Boss” and also “I’d Still Say Yes” by Klymaxx’s.

Sisters released a music video directed by Cameron Casey for their single “So Many Ways”. It was featuring Mekhi Phifer, an actor.

The Braxtons also did other versions of this song such as one with Jay-Z they did at the Sout Train Lady of Soul Awards.

This song was also on a soundtrack for a comedy movie called High School High.

The single “So Many Ways” was No. 83 on the Billboard Hot 100list and was 22nd on the UK Singles chart a year later.

In January of 1997, she released the second song from that album titled “Only Love”. It went to No. 52 on the Billboard R&B Hip Hop song chart. They also made a music video for this.

The remixed version of “The Bods” went to No. 1 on Billboard Dance/Club Play chart which was a huge success.

The last song that she released from the album was called “Slow Flow” and it got to No. 26 on the UK Charts in 1997 and was and still is their best charting single in the United Kingdom.

While Toni Braxton went on his European Tour the Braxtons were their opening act in 1997.

In 1998 the group fell apart after Tamar Braxton decided to leave the group. She left to work on her solo career with DreamWorks Records.

Although Tamar wasn’t there they continued to perform in all sorts of projects.

In 2004 Trina was in a play which was titled Meet the Browns. She was given the role of Tracy.

Her appearance in “Rise” was also noticed. The play was written by Christopher Martin and Salt from a female band Salt-n-Pepa.

She was also in a side production of Dreamgirls where she played Deena Jones.

She was in “The Walk” in 2004 along with Regina Belle and Eva Pigford.

She was also in two films. One of them is called “Jail Party”.

She hosted Urban Idol for UPN.

While Toni was on her Libra Tour back in 2006 Tamar and Trina were her backing vocals.

The two of them also performed in Revealed at the Flaming Hotel and Casino until 2006 when Tamar got replaced for Sparkle and Towanda replaced the two sisters.

Trina joined another group in 2009. It was a wedding band called “Simply Irresistible” and she became the lead vocalist of it.

Trina made a cameo in “I Can Do Bad All By Myself” and performed as a band member in it along with Mary. J Blige’s character.

In 2011 all of the sisters reunited to do a reality TV show called “Braxton Family Values” on WE tv.

In 2012 Trina started her solo career. She signed Soltri Entertainment and released her solo single. It was called “Party or Go Home” and was released in March. They also did a music video directed by Derek Blanks for it.

Trina was also on a sitcom on TV Land called “The Soul Man” with her sister Tamar.

She released another single in 2013. It is called “Game Time”.

A year after she got a role in “Where’s The Love” where she starred alongside Denise Boutte and David Banner. At the same time Trina, Toni and Tamar were on Traci’s music video for her song “Last Call”.

In 2015 they released an album titled “Braxton Family Christmas”. This album features Tamar, Towanda, Toni, Traci, and Trina. They released it in October that year.

It went to No. 27 on the US Billboard R&B Hip Hop Album chart and 22 on the R&B chart and 12 on Top Holiday Albums chart.

This album also went to No. 1 on the US Heatseekers Albums chart in December of 2015.

In 2018 Trina and her sisters Toni and Towanda appeared on her sister’s Traci’s song titled “Broken Things”.

In September of 2018, Trina started co-hosting a show on TV one and on TEGNA networks called “Sister Circle”.

In 2018 she was in a play called “Head Over Heel” with actors like Q Parker, Tony Tone, Q Parker. Angie Stone and so on.

She is also a co-owner of a recording studio called “The Bass Mint” in Atlanta. She has a production company called Soltri Entertainment, too.

In 2014 she made her own hair collection line. It is called Bar-Chix.

Trina has two sons named Eric and Caleb. She was married to Gabe Solis until 2013 but he wasn’t the father of her boys. He was their stepfather since they were kids from Trina’s previous relationship.

Trina filed for divorce after ten years of marriage due to his constant cheating. However, Gabe apologized and wanted to give their marriage another try but it just did not work out and they finalized their divorce in 2015.

In the summer of 2018, Gabe went to the doctor because he was not feeling well to discover that he has cancer and just a few months of life. He died in December the same year.

Trina is currently engaged to Von Scales. He proposed to her in Napa Valley. It was confirmed by ber sister Tamar on the Wendy Williams Show in September of 2019.