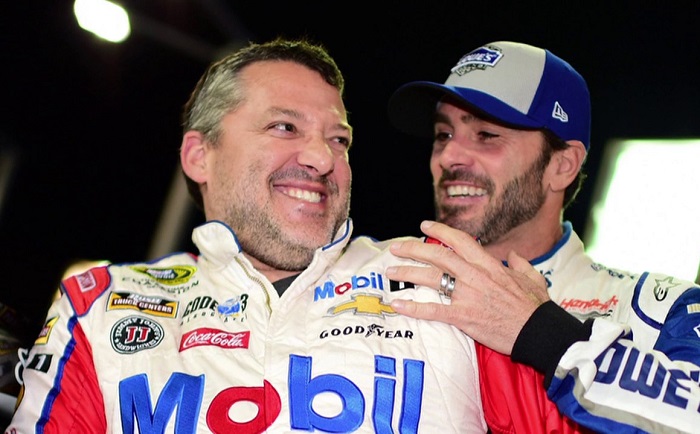 Tony started racing when he was just a small boy – in 1987 he won his first championship at the World Karting Association.

Tony had raced through several leagues, and he won Rookie of the Year at the United States Auto Club four years later.

He was the victor of all 3 USAC events (National Midget, Sprint, Silver Crown), the first racer to ever win a USAC Triple Crown.

One year after this Tony has made his NASCAR première in the Busch Series and at Pikes Peak won his first Indy Racing League race.

Tony is the only race car driver in history who has won both – an IndyCar championship and NASCAR.

He wisely invested his money – he partnered with Haas CNC Racing – this company is now called “Stewart-Haas Racing”.

Tony had a difficult childhood – he is the son of Nelson and Pam Stewart.

Father Nelson abused his son, and he beat up the boy if things did not go in his direction.

On the other side of the story of complicated personal connections, he did encourage Tony to race, but even there he loses his temper if Tony did not win the race.

Stewart was also problematic in school in a sense that he was often a victim of bullying, because he was not so rich, as maybe other kids.

The turbulent relationship between his parents ended with a divorce – they had separated when Tony was just 17-year-old.

He grows up to be very rebellious and enjoyed the ride on his bike whenever he could – he often rides it over-the-speed-limits. Because of this, he had a problem with the law.

But this did not stop young Tony to continue riding his bike – as time will prove it, eventually, as he got successful, his relationship with his father got better.

In 1995, The Smoke became the first driver to win USAC’s variant of the Triple Crown, winning championships in 3 of USAC’s major divisions, Sprint, National Midget, and Silver Crown.

Tony has won the Hut Hundred, and 4-Crown Nationals were the highlights of the year.

He continued to race successfully, and in 1998 he ran Busch Series.

In these series, he had raced for Joe Gibbs who was the NFL Hall of Fame head coach of the Washington Redskins. Gibbs had a big success with Bobby Labonte in the Winston Cup Series.

In 1997, Tony wanted to drive for the Winston Cup Series, for Ranier-Walsh Racing, but later on, he gave up this idea.

In 1999, Tony began Sprint Cup as he qualified on the outside pole for the Daytona 500 his No. 20 The Home Depot-sponsored Pontiac.

Tony was involved in a clash with Dale Earnhardt for the lead in the last rounds.

Tony”s result was impressive, and people were blown away by his performance.

His car was often in top ten – Tony had won a couple of pole stands at short tracks and set a list record for wins by a rookie with three—Phoenix, Richmond, and Homestead.

Tony finished his first Cup season with a 4th-place end in the points, making it the leading points finish by a rookie in the contemporary era.

He won the Winston Cup Rookie of the Year award.

In this year, Tony had run the “Memorial Day Double”, regardless of a 17-minute rain pause at Indianapolis.

He ended his race in a sixth place in the Indianapolis 500, and he was third in the Coca-Cola 600.

In this year, Tony had an incident with a reporter, in which away he kicked a tape recorder – as a consequence, he was not allowed to practice.

His fines and problems gave him the reputation of a bad boy of NASCAR.

The year 2002 was hectic for him, he struggled and had multiple crashes, and this was the last year when he drove his Pontiac, but this was the year when he held off a charging Mark Martin to gain his first Winston Cup championship.

In the year 2003, he succeeded having a season without any accident – the team was driving Chevrolets instead of Pontiacs.

Tony had a worst Cup season at this point up until 2006, but his result was still very good enough for 7th in the point’s standings – he won at Pocono and Charlotte.

The next year started with Tony teaming up in a Boss Motorsports Chevrolet with Andy Wallace and Dale Earnhardt Jr. to take fourth in the 24 Hours of Daytona endurance race.

The season was highlighted with Tony”s first win coming at Chicagoland.

The most successful career in his career is 2005 – this year was good for the Nextel Cup, as Tony won his second Cup title, along with the Infineon, Daytona, New Hampshire, and Watkins Glen.

In 2008 Tony ended his contract with Joe Gibbs Racing- He took half ownership of the team which was renamed Stewart-Haas Racing, making himself the highest paid NASCAR driver.

He was racing himself, but he also introduced new drivers like Danica Patrick and driver David Reutimann.

He had raced 410 and 360 Dirt Sprint Cars about 50 times a year throughout the USA and Canada.

In 2011 Tony won something special – the first ever World of Outlaws race at Ohsweken Speedway.

In 2014, Tony returned to racing in his No. 14 sprint car, the very car that broke his leg the year before.

Tony has founded now his famous Foundation that carries his name, back in 2003.

It is founded to help children and drivers who are injured while competing in motorsports.

He often appears on TV, starring in Subway and Coca-Cola commercials, a 3 Doors Down music video with Dale Earnhardt, Jr., and on “Last Man Standing”.

He has his connections to some other media, like radio – Tony hosts a two-hour weekly radio show, called Tony Stewart Live that is broadcast on Sirius Satellite Radio.

From 2007 to 2008Stewart co-hosted the show with Matt Yocum and took audience calls.

Tony had real success with ladies – as the public knows, he has dated Jaime Schaffer, Tara Roquemore, Jessica Zemken and Krista Dwyer.

Tony was engaged in 1999, to Tara, but they eventually split up their engagement.

There were some reports in the tabloids that Tony was gay, and that his multiple affairs with women were just a cover.

It was said that he is unable to keep a woman happy for a long time – but Stewart proved them wrong since he is in a stable connection with his now-fiancée Penelope Jimenez.

Penelope is a model-actress known for emerging in March 2003. In the front cover of Playboy magazine.

The love couple first met in 2016 and shortly began their dating relationship.

In one interview, Tony has stated that he will never get married, but since he has a fiancé means that marriage is close.

Tabloids covered the story and stated that Penelope accepted his proposal right away.

In the life of Tony Stewart, there is certain blackness – Tony had an accident while racing. He had killed a fellow racer accidentally in 2014.

He was alive on the race filed but was later pronounced dead on the hospital.

Tony was charged with two offences. One is a criminally negligent and second-degree homicide murder. But the case was dismissed – Stewart made a settlement with the victim’s family out-of-court.

After this event, Tony said that he would retire – the 2016’s season would be his last one to race.

Regarding the incident, Tony had said that it was one of the biggest tragedies that he had in life, in every way and it is the event that affects his life forever.

Of course, racing is in his blood, and Tony does it in his “free time” – he raced in July 2018, In the King of the UMRA TQ Midget Race with his dad, the race was held at the Bartholomew County Fairgrounds.

From 1999 to 2001, Tony worked for Turner Sports as a guest analyst on one NASCAR Busch Series.

Smoke is a racing driver, and he is one of the best paid in the world – he has gained more than 70 million dollars during his career in car racing.

Tony”s annual income has been tightened at a $19 million, and for the championships, he gained even more money.

Tony additionally has earned money from the non-championship NASCAR Sprint All-Star Race XXV – he received a check on more than 1 million dollars.

Tony has also had many lucrative endorsements that earned him more than 6 million dollars – among them, and there are famous brands like Oakley, Burger King Steak House XT, Coca-cola, Toyota, and many more.

Tony has earned even more by purchasing Eldora Speedway and part own Macon Speedway and Paducah International Raceway, the All Star Circuit of Champions club.

Tony has several luxurious houses in Indiana, and he owns sleek cars like; 1957 Chevy Belair, 1955 Chevy Nomad, 1984 Cadillac, 1967 Pontiac GTO and 1979 Pontiac Trans Am Firebird -this last is his favorite car.