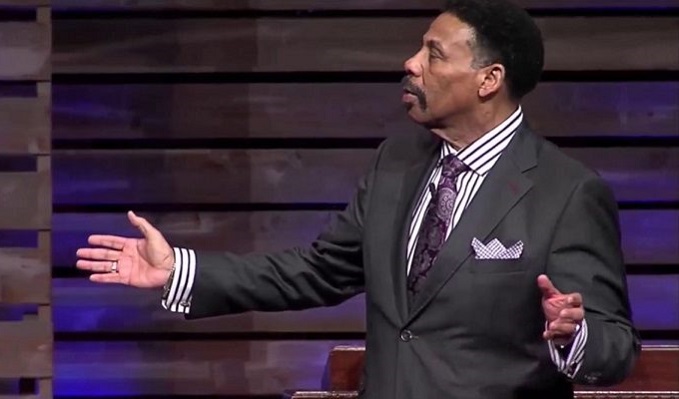 Tony Evans is a widely known American Christian pastor, broadcaster and a notable author who can be very proud of his achievements.

This is true especially because he is the first African American person ever to have a theology doctorate from Dallas Theological Seminary, one of the biggest evangelical seminary located in Texas.

His parents are Evelyn and Arthur Evans. He was the oldest of four and since he remembers his parents were at conflict.

There have been times when Tony was very concerned about everything happening in their household, to the point where he thought that his parents are going to have a divorce.

But his father dedicated himself to God and saved his marriage. Tony saw something very special in this and he said that he never wants to change his relationship with God: he wants to remain as connected.

His radio career began in 1973 when he was still a part of Dallas Theological Seminary. It began with one call from a radio producer from Houston who contacted the Dallas Seminary trying to find a good preacher who would conduct a religious program for free and make religion closer to people.

Tony was the one picked for the job after a great job recommendation delivered by his seminary professors. It was more than phenomenal for him to work with all of these people that shared similar interests with him.

Tony decided to take the offer because he already knew then that he is a great preacher and was happy to spread his theological knowledge to the masses he made his recordings on the campus of the Seminary, in a little studio they had.

He did this for years and hid preaching were released on a Houston radio station.

He became popular and his sermons were quite listened. After he became a pastor he decided to found a fellowship which he named Oak Cliff Bible Fellowship.

It was founded in 1976 in his own home with a few close members of family and friends. He serves there as a senior pastor and is also known as a leader of The Urban Alternative Organization.

This organization is devoted to spreading the Christian word and has its own radio broadcast named “The Urban Alternative”.

His wife Lois Evans co-founded the ministry with him and was involved in all the crucial things about it. She helped him find the right way and he is very happy that he found her.

She has great business skills and was good at organizing so she helped the ministry to develop into a big and important ministry. This was something Tony never could have done by himself, he says, and therefore he is very thankful for everything she had given him.

Ten years after he founded the ministry Tony was invited to the National Religious Broadcasters conference which was the confirmation of his popularity and the respect he garnered through his work.

His preaching at this conference gave him a lot of attention and spread hid words even more. It was because many radio stations started airing his program.

Dr. Evans has written over 100 books and studies. He has also written his most important book which he keeps as his legacy: “The Kingdom Agenda”. He says that he always gets his inspiration from his life and that he wants to spend more time being mindful.

In his third book, he offers his vision about life and relationships while following the path of God. Other very popular books he had written the “Kingdom Man”, “Kingdom Woman” and “The Power of God’s Names” which was also a bestseller. This book was published by Harvest House.

He strongly recommends social changes through a partnership of church and schools since he believes it may affect a lot of children and take them to the right track and teach them moral values.

Dr. Evans has received numerous awards during his life. While he was still a student he received the award “Student of the Year” in 1972 and the “Outstanding Achievement Award” from his Seminary 1976.

In 2006 his Oak Cliff Bible Fellowship was named on the list of Top 50 Most Influential Churches in the US.

He has also received an Honorary Doctorate of Divinity from the Baptist University in Texas.

When he speaks of his role models in the area of preaching he always mentions his professor of homiletics Haddon Robinson, who was his professor at Dallas Seminary and who gave him a firm base in his subject claiming that Bible consists of ideas which should be put in motion.

He speaks highly of several pastors and has huge respect for John MacArthur, Chuck Swindoll, and Ruben Conner, who all have different teaching but they made an impact on him by these teachings.

He is in a very happy marriage with his wife Lois and they have been together for 50 years. Many people want to know the secret to a happy life in marriage, but he always says that they should just be honest and turn to God whenever they have issues.

They have four children together and they have many grandchildren and even became great-grandparents recently. They enjoy these roles very much and like to spend time with the little ones.

His children are Anthony, Jonatha, Chrystal, and Priscilla.

Chrystal Evans Hurst is his oldest child and she is a very talented writer, speaker and the leader of Christian worship.

She is also a member of her father’s ministry and helps her mom in leading it. She was one of the authors on her father’s book “Kingdom Woman”.

She has her own blog named “Chrystal’s Chronicles” and has almost 50 thousand followers on her Instagram account.

His second daughter is named Priscilla Shirer and she is a very popular author, actress, and evangelist who became widely known as a great writer.

Priscilla is known for her role in the movie “War Room”, a Christian drama movie which was a huge hit although it gained many negative reviews.

It was made with a budget of $3 million but earned $74 million.

Priscilla founded “Going Beyond Ministries”. Anthony Evans Jr. Is a Christian singer and a skilled songwriter who has released six albums and became a TV star after he entered “The Voice” reality show.

Jonathan Evans is his second son and is also involved in the spreading of Christian worship. He is a motivational speaker and author.

Together with his father Tony he has co-written a guidebook named “Get in the Game”. Jonathan is the chaplain of the Dallas Cowboys and also works for the Dallas Mavericks.

In his latest work, Dr. Tony Evans warned about Satan’s work on undermining men, pointing out that almost 70 percent of children in African American communities are born without a male influence in single mother’s family.

Dr. Evans is the chaplain of a known NBA team called the Dallas Mewricks.

At the beginning of 2019, Tony Evans discovered that his wife’s cancer returned after a period she has been cancer-free. Cancer he is talking about is a very rare kind of gallbladder cancer.

2018 was also a very hard year for the family because they have lost two close members: his young niece Wynter Pitts unexpectedly died in the summer of that year and he lost his brother a little earlier before that.

Pastor Tony says that God is helping the family in their sadness and he asked for prayers dedicated to his ill wife Lois.