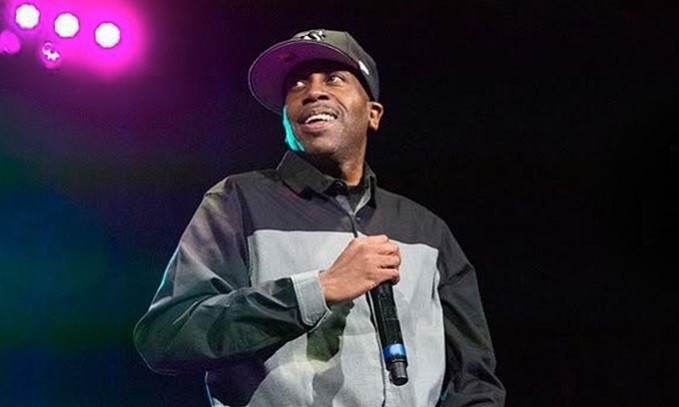 His full name is Anthony Terrell Smith. He is known worldwide by his nickname (stage name) Tone Loc.

Tone Loc is shortened for “homeboy handle”, Tony Loco, which in the Spanish language means crazy.

Tone Loc is a rapper from the United States. He is also an actor and a producer.

His raspy voice is something that is specific about this musician, and his songs, “Funky Cold Medina” and “Wild Thing”, also made him very popular.

Loc’s hit song “Funky Cold Medina” got a nomination for a Grammy Award.

He was featured in the song “We’re All in the Same Gang”, which was made by West Coast Rap All-Stars, and it was a collaborative single.

Anthony Terrel Smith was born on March 3rd, 1966, in Los Angeles, California. He is a son of James Smith and Margaret Smith.

He was raised in West Los Angeles.

His mother was a retirement home manager. His father died in 1972 when Tone had only 6 years.

After his father’s death, Margaret raised Tone and his older brothers. One of his brothers, Johnny Gadberry, had a car accident in April 2006, in which he unfortunately died.

He attended Hollywood Professional School, and after that, he went in a private exclusive high school.

Tone also attended a junior college, but only for a short time.

Since he lived in a single parent family, he used to spend a lot of time in the streets where he used to hang out, while the new kind of music was largely evolving.

He didn’t have much patience for his guitar lessons, so rap music, which he could do just by himself, seemed appealing to him.

Tone was in his early teenage years when the rhyming, tuneless and extremely rhythmic music widely known as rap, and also Hip-Hop, appeared in the urban parts of America during the middle 70s.

When he was just 13 years old, he started rapping all by himself. He used passages that were instrumental, mostly from records by Funkadelic, the Ohio Players, and other groups of funk genre that he had an admiration of.

Triple A, was a rap trio which Tone Loc formed, but it dissolved very soon.

However, it gave him the inspiration to continue creating lyrics.

Meanwhile, on the streets of Los Angeles, youth culture was nurturing musical creativity for Tone Loc.

During his younger days, Tone Loc was a street gang member. The name of this gang was SouthSide Compton Crips.

Since he found himself in the gang world, his mother decided to enroll Tone at Hollywood Professional School, which was highly exclusive at that time.

He graduated from high school, and soon after that, he created a rap duo with M-Walk, who was a local scratcher of records.

Tone dropped out from junior college, soon after he enrolled it. He attempted to do business in the real estate world, he bought houses that were closed by banks, repaired them and resold them, earning a good sum of money.

He was continuously rapping while doing the real estate business.

Once he said to Time’s journalist that rapping is an easy job for him since there were days when he just got out of bed and things went easily through his mind.

He always tried to write down these things, and most people didn’t possess this talent.

Tone’s specificity is also the distinctive feature of his voice, which he gained when he had certain throat problems when he was 13 years old.

He drunk hot tea with brandy, which his mom gave him, and instead of easing the pain in his throat, this mixture actually burned it.

As it was commented in Rolling Stone Magazine, this rasp just gave the teenage boy a romantic feature of his voice and even made him closer to turning into Tone Loc.

He recalls this job with a lot of emotions since it was generously paid and he had minimal work to do.

Sometimes he used to go under his colleagues’ desks and he used to sleep there.

He admitted to Musician magazine that he used to sleep and at the same time he was paid for the job.

At some extent, this attitude was brought in his rap career.

In spite of the millions of dollars that he has earned so far, only from his first album and tour across the country, he is still far from the opinion that music is not diverse.

Rolling Stone wrote that Tone Loc did not have the passion like other rappers and that he didn’t write the lyrics for his two most popular singles “Funky Cold Medina” and Wild Thing”, but someone else did.

Even Tone Loc himself admitted that he was just having great fun. Besides his passion for rapping, he has a passion for sports. He wanted to become a soccer player, but unfortunately, he had problems with his ankle.

He said that he cared only about a few things, women, his vehicle and sunshine.

Tone Loc left this gang after a while and decided to devote himself in music.

“We Are the World”, is Tone Loc’s single that was the best seller of all time. It was released in 1985 for the charity purposes in order to collect aid for people from Africa who were on the verge of starvation.

Another single of Tone Loc that was almost as popular as “We Are the World” which told the story about casual sex.

This single celebrated, as its refrain says “doin’ the wild thing”. Tone Loc released this single when he was young, and his name became popular in rap circles and pop music without his trying to become famous.

Mike Ross and Matt Dike, the two entrepreneurs who were trying to create a music label named Delicious Vinyl, heard of Tone Loc in August 1987.

As soon as they heard his voice, they were astonished and determined to get his voice on a record.

Tone also admitted in Rolling Stone Magazine that he was thankful to his mom for giving him a career, by scorching his throat.

The single “Wild Thing”, was published on a low budget, on a machine with eight-track tape, in the apartment of Tone’s co-producer in Hollywood.

They used a drum machine for producing the booming sound which is a characteristic of rap music.

For instrumentation, they used samples of guitar riffs. The only thing that Tone had to do was to lay down and just rap in his own, characteristic, sexy way.

This single also has its video, which was heavily exposed to MTV. The video was created for only $419.77, and it hit the point, since it became a multi-platinum single in just a few months, since its release at the end of 1988.

Shortly after this, Tone’s debut album named “Loc-ed after Dark”, was released.

It brought him the first place on Billboard’s pop-album charts-no small feat, and he was the first black musician and rapper to hit this high position.

Spin magazine described this album as something which is full of rumbling bass sound that makes our chest tremble.

The producers who co-operated with Tone Loc hired another rap musician to write new song lyrics for “Wild Thing” since Tone’s version was too filthy and inappropriate for broadcasting.

However, those who find Tone’s lyrics inappropriate are less numerous than those who do not share their opinion.

His music helped to establish the so-called West Coast school of rap music, which has long been regarded as quite inferior.

He believed that the rap music scene of Los Angeles was getting much more respect with high-quality music.

It seems that Tone Loc has become so popular due to his accessibility.

Since it started to develop, rap music was a synonym for those who fight against all kinds of injustices, whether they are racial or not.

On the other hand, Tone’s music is pretty much funny, laid-back and entertaining. The subjects of his lyrics are his personality and own pursuit of having fun and pleasure.

These themes are appealing to both kids from the streets of the inner city and middle-class people from the suburb as well.

Generally, his music is a mixture of pop, rap, and even metal, which is on the other hand more catchy than straight rap beats.

Tone Loc is all about smoothness. Once he said to USA Today that he felt like driving a car which almost ran out of gas until it completely stopped and just maybe he would fill it up again.

He never bothered about his career. He even said that he might return to his real estate business.