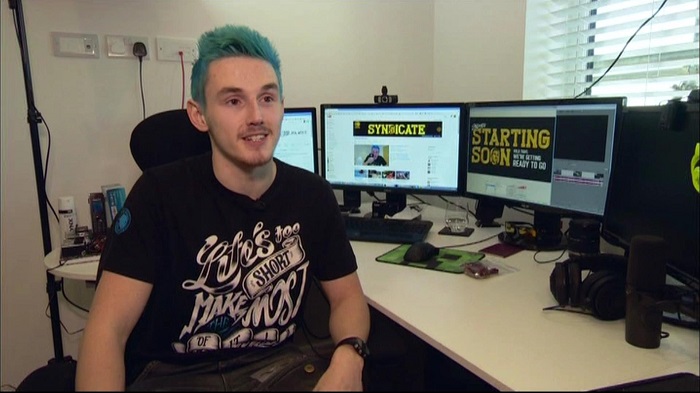 Tom Cassell aka Tom Syndicate, or just Syndicate, is a popular modern YouTuber and gaming commentator from United Kingdom, who made his fame by filming and commenting on his own games. His YouTube channel is considered to be one of the biggest gaming channels on the platform with almost 10 million subscribers. He is also huge on social networks, and the popularity earned him $3 million net worth.

In this article you will find out all there is to know about the man: how Syndicate rose to popularity, what’s his net worth, where you can find Tom Cassell on social networks …

Tom George Cassell was born in Manchester, UK on the 23rd of June 1993. He went to The Blue Coat secondary school in Oldham, Greater Manchester. After taking an A-level exam at Hyde Clarendon College, Tom decided against university, and started concentrating on his YouTube channel.

Tom Cassell started YouTube Channel „The Syndicate Project” on the 3rd of September 2010. Number of subscribers grew with the release of “Black Ops Zombies” and later series “The Minecraft Project”. The Syndicate Project Channel now has 9,9 million subscribers and 1,97 billion views. It made the list of YouTube’s 100 most popular Channels.

Cassell also owns a clothing line “Syndicate Original”, with stores in the UK and US.

Tom Cassell readily talks about his personal life in his vlogs on his Youtube Channel “Life of Tom”. Syndicate has a sibling, an older sister named Alice, and his parents are divorced. Tom Cassell is very close with his grandfather Harry, and often publishes photos of the two of them together.

He had a girlfriend in 2013 – Kaitlin Witcher, aka Piddleass on YouTube. They met through Minecraft, but are not together any more, and Tom is going as single for now.

Residence: a house in Manchester

As a teenager, Tom worked at McDonald’s. He quit the job the same time he quit school, and tried out on YouTube.

In July 2016 Cassell was sued when he promoted the gambling website CSGOLotto.com without disclosing that he was the vice president of the site.

Tom Syndicate borrowed his voice for the character of Loki in Video Game „Marvel Avengers Academy“.

Tom Cassell, Tom Syndicate, is a British YouTuber and gaming commentator, huge on social networks with millions of fans following his work and his life story.

Syndicate owns one of the biggest gaming channels on YouTube with almost 10 million subscribers, and is estimated to be earning $1 million a year.