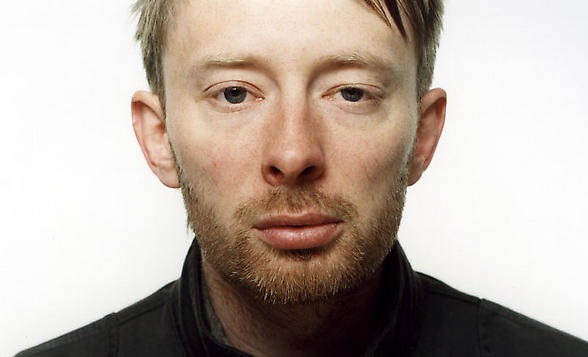 Thom Yorke is the name of a respectable English singer and musician who also became known as a great songwriter.

He is also a member of a popular rock band named Radiohead and has written lyrics for most of their songs.

He is a very talented musician who plays a lot of different instruments but his biggest love is keyboards and a guitar.

In 2019, Thom and his band Radiohead have been honored to be inducted into the famous Rock and Roll Hall of Fame in 2019.

He was born as Thomas Edward Yorke on October 7, 1968, in the town of Wellingborough, Northamptonshire in England.

He grew up alongside his younger brother Tony who was a singer in a band for a while.

Thom had a health condition from the moment he was born because his left eye was paralyzed. He had to undergo over five operations before he even went to school.

His last surgery caused his eyelid to drop and he decided to stop having surgeries at all and he made peace with his looks.

The Yorke’s moved a lot since his father was a nuclear physicist and worked in the chemical department and had changed workplaces a lot.

That is why the family lived in Scotland until Thom was seven years old, and he often moved from school to school.

In 1978 the family finally settled in Oxfordshire in England and Yorke started going to the Standlake Primary School there.

He was only 7 years old when he gained his first guitar all thanks to his inspiration with  Brian May, a member of the “Queen” rock group.

He was so into playing the guitar that he decided to make his own guitar when he was 10 years old. He was 11 when he joined a band and started writing songs.

He started going to Abingdon public school for boys but he didn’t fit in there and he felt like he did not belong there. That made him turn to music even more.

The Abingdon’s music director, whose name was Terence Gilmore-James, supported Thome in his efforts in such a way that Thom later stated that he would never become a musician without Terence’s help.

They have formed a band and named it “On a Friday”. The name of the band has its meaning because Friday was the day they rehearsed.

After Thom finished school he wanted to continue his education but he took a year off to practice music and make a demo tape with his band.

They have sent a tape to several record labels and gained an offer from  Island Records to record an album.

The band, however, decided that it would be wiser to enroll in the university and then continue pursuing their musical career.

In 1988, Thom enrolled at the University of Exeter, where he started studying Fine Arts and English.

Since he had to move away from Oxford to Exeter the band was put on a hiatus.

Exeter brought him two new friendships: with Stanley Donwood, who later produced his music and with Rachel Owen, who eventually became his wife.

In 1991, his first band On a Friday started playing together again, after most of the group members have graduated from their universities.

It was the same year that the band signed a contract with Parlophone. This brought the change of their name into Radiohead.

Radiohead was soon recognized by the public and the critics after their first album called Pablo Honey was released. The single “Creep” became a huge hit and Yorke started acting like a rock star. He changed his appearance in the way that he bleached hair and started to wear hair extensions.

Their second album called The Bends was released in 1995 and they gained a lot of fans. They were honored to become a supporting act for R.E.M. who had their European tour a little after. R.E.M. had a huge influence on them before they even met them so they were very proud to be on the tour with them.

Thom became a good friend with Michael Stipe, the singer and the frontman of R.E.M. and Michael helped Thom to deal with fame and the schedule, without alcohol and other substances.

In 1997, Radiohead has released their third album named “OK Computer” in which all the members produced songs together making it one of a kind album.

The album was a huge success and brought the band the financial security they yearned for.

On the other hand, Thom had some issues about the album and soon after the tour “OK Computer” was finished Yorke started having emotional troubles. This led to him suffering a nervous breakdown which caused him to stop writing lyrics.

Thom decided that it was time for him to get some rest from the stages and tours so he relocated to a place in Cornwall where he enjoyed nature and started writing songs on his piano, putting the guitar aside for a while.

At that time he listened to electronic music a lot so he took that influence to Radiohead’s new album named “Kid A” which was released in 2000. It was followed by Amnesiac in 2001.

The band experimented with synthesizers and drum machines so both albums weren’t regular Radiohead albums.

Although a part of the fans and critics disliked these albums they were commercially successful and were on the top of their charts.

In 2003, their 6th album named Hail to the Thief was released and it was again a fusion of electronic music and rock music.

Yorke had a very fruitful phase at that time, stating his political views and his view of the world at the beginning of a new millennium.

Yorke also released his solo albums starting with the one from 2004, named The Eraser. This album came out supported by the XL Recordings and by his friends from the band.

One of the singles from the album was named “Harrowdown Hill”, and it entered the Top 25  of the UK Singles Chart.

This album received a nomination for the Grammy Award in the category of the Best Alternative Music Album.

In 2009, Yorke has put together a band that will perform his own songs and he named it  Atoms for Peace.

He gave his contribution to the soundtrack of the Twilight Saga: New Moon movie the same year.

Their seventh album named  “In Rainbow” was released independently through digital download and the band rose a huge controversy by making the payment completely voluntary, in “pay-what-you-want download”. It didn’t sit well with major record labels.

In 2011, they released their new album called “King of Limbs”.

Their single named “Lotus Flower”, for which they made a  music video was focused on the “wildness” of the band and it had many scenes of Thom dancing in a very erratic way. This dance later became a meme on the internet.

The band Amok released their album called Amok in 2013 and toured through the USA and Japan that year.

In 2014, Yorke’s second solo album came to light and it was released through BitTorrent and was titled Tomorrow’s Modern Boxes.

That year it was his album that was torrented the most and he was very pleased about it since he has a very bad opinion about major record labels.

In 2015, he was one of the performers at various festivals such as the Latitude Festival and the Summer Sonic Festival.

In the spring of 2016, Radiohead released an album called “A Moon Shaped Pool”, which was their 9th album.

A great moment for the band was in 2019 when it was inducted into the Rock and Roll Hall of Fame.

His third album is named Anima, and it was released for sales in the summer of 2019. It gained positive critics and many critics consider it his best album ever.

Paul Thomas Anderson produced a short movie that came together with the album.

This album was the most successful Yorke’s album which went to the top of the Billboard Dance/Electronic Albums chart.

Yorke has always been very honest about his music and people with whom he worked with. He is a good friend with a producer Nigel Godrich who worked on all the Radiohead albums and on his albums too.

When asked about his musical influences he stated that his teenage role models were Queen, R.E.M., and Bob Dylan.

He was later very influenced by the Pixies, Björk, and PJ Harvey with whom he later collaborated.

At the beginning of the new millennium, he became obsessed with the world climate and got involved in the work of green organizations.

He supports Friends of the Earth organization and performed at their 2006 benefit concert. He tries to help all environmental causes as much as he can.

He started working with Greenpeace and in 2015 he had a benefit concert in Paris, which took place during the UN Climate Change Conference.

He is also a big supporter of stricter gun control and is especially disappointed by the US gun laws.

In 2008 he greeted the election of President Barack Obama and even released a single to celebrate it.

However, after the election of Donald Trump, he twitted his disappointment and stated that it shows how people are blind to the major problems.

As for the politics in his country, he is not for Brexit and he is one of the celebrities who spoke out for making second voting about it.

Thom is a vegetarian for a long time and is often involved in the activities for animal rights.

He started dating an artist Rachel Owen while he was a student and they got married in 2003. Before that, she gave birth to his son Noah and a daughter Agnes.

In the summer of 2015, Thom and Rachel got separated. She had died of cancer one year later and it devastated him and his children. He tried to take care of the kids the best he could although he knew he will never replace their mother.

Thom is dating Dajana Roncione, an Italian actress born in 1984 so he is 16 years older than her. Their relationship began in 2017 and seem to be very stable.

Thom has an Instagram with over 150 thousand people following him but he is not very active on it. He follows a few Instagram accounts and doesn’t post very often.