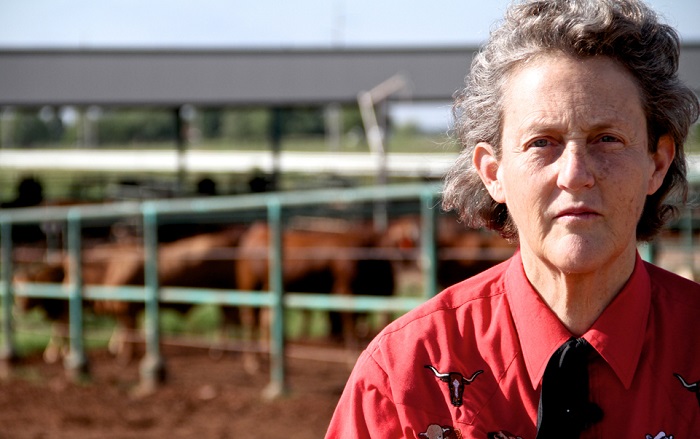 She is also a livestock consultant in the animal industry and an autism spokesperson from the United States. She herself is on the autism spectrum.

Mary is an author of over 60 scientific papers done on animal behavior and promotes good treatment of livestock for the food industry.

She is an inventor of „Hug Box“, a box made to calm people with autism.

A movie called „Temple Grandin“ that won Emmy was made after her life and work.

She was born in Boston, located in Massachusetts on August 29th in 1947  by her full name Mary Temple Grandin.

She was brought up in a wealthy family. Mary was called Temple by her parents because one of the family’s employees was called Mary and they wanted to avoid the confusion.

Her father is Richard McCurdy Grandin, a real estate agent. He inherited one of the US’s biggest Wheat Farm companies at that time, called “Grandin Farms”.

Mary’s mother if Anna Eustacia Purves. She is a singer and an actress with a Harvard degree. Her grandfather is John Coleman Purves, a man ho helped to invent autopilot aviation systems.

When Temple was only 15 her parents divorced and her mother married Ben Cutler, a saxophonist only 3 years later. Her father died in 1993 in California.

Temple has three younger siblings. One brother and two sisters. One of her sisters is an artist, the other one is a sculptor and her brother works as a banker.

Temple’s great-grandfather and his brother were French and Huguenots and they came to the US to drill for oil.

After this didn’t go so well they became bankers but when the firm they were working for collapsed they received a lot of land in North Dakota as debt collateral.

That’s when they started their farm. The family even has a town Gradin called by her great-grandfather, John Livingston Grandin.

When she was a child Temple was never diagnosed with autism. When she was two she got a formal diagnosis but they said she had “brain damage”.

When Temple was a teenager her mother read a checklist on autism by Dr. Bernard Rimland, a founder of the AUTISM Research Institute.

After seeing this checklist she realized that Temple’s behavior is best explained by autism.

After this Temple was determined to be an autistic savant. This means that she has autism but has a lot more abilities and excels in some fields that are connected with memory.

Before this, her mother often took her to special needs researchers like those in the Boston Children’s Hospital.

Since she was 2 years old Temple had a speech therapist. When she was three she had a special nanny to play educational games with her. She then went to Dedham Country Day School’s kindergarten.

Temple often speaks of how grateful she is to have such supportive teachers in her elementary and preschool.

Unfortunately, it wasn’t so great in high school and junior high.

Doctors said that they wanted to institutionalize her after it was revealed that she has autism but her mother didn’t like that idea at all because that would mean that she wouldn’t see her child anymore.

When Temple was 14 she was expelled from Beaver Country Day School because she threw a book at one of the students.

She was often bullied for being „nerdy“. She was mocked and called „rape recorder“ because she would often have a habit of repetitive speech.

When she was 15 she spent her summer at Arizona Ranch and this made her love animals and think about her career in it.

After that, she went into Hampshire Country School, a boarding school located in New Hampshire. In the past, this school was called „Mountain Country School“.

In this school Temple met William Carlock, a science teacher who also worked for NASA and he mentored her through those years. This teacher was the one who gave Temple the idea for hug box

When she was 18 she built that box. It faced a loto f criticism at Franklin Pirce College but professor Carlock suggested her to do scientific experiments to see if it’s actually effective.

In 1970 Tempel got her bachelor’s degree in human psychology from this college and after that a master’s degree in animal science from Arizona State University.

In 1989 she got her doctoral degree in animal science from the University of Illinois.

Temple was one of the first adults to publicly speak about having autism which was very much appreciated at that time. In 1986 she published a book „Emergence: Labeled Autistic“.

After that, she wrote „Thinking in Pictures“ that was published in 1995.

In 2004 she published „Developing Talents: Careers for Individuals with Asperger Syndrome and High-Functioning Autism“.

In 1980 she published two scientific works, „Livestock Behavior as Related to Handling Facilities Design“ and „Observations of Cattle Behavior Applied to the Design of Cattle Handling Facilities“. She was the first scientist to report that livestock is sensitive to visual distractions such as dangling chains.

She edited „Livestock Handling and Transport“ and talked about how cattle that remain calm during handling have bigger gains in her famous paper „Feedlot Cattle… with Excitable Temperaments“.

She also has a paper „Assessment of Stress During Handling and Transport“.

One of the Temple’s biggest achievements is developing a scoring system for animal welfare. After this started being used there were huge improvements in how the animals were handled.

She designed curved corrals that prevent animals for slaughter to injure themselves. Her designs are used in the slaughterhouse industry.

In 2009 Temple was named a part of the American Society of Agricultural and Biological Engineers.

In 2010 Temple was listed as one of the Time’s 100 most influential people and she was in a category called „Heroes“.

She has many honorary degrees from universities like Carnegie Mellon University, McGill University, Emory University and the Swedish University of Agricultural Sciences.

In 2015 Temple became a fellow in the Society for Technical Communication.

In 2011 she got the Ashoka Fellowship.

In 2012 Temple was inducted in the Texas Hall of Fame.

The same year she was inducted in the „Hall of Great Westerners“ in a museum called the National Cowboy & Western Heritage Museum.

In 2015 she got a Meritorious Achievement Award from OIE.

In 2016 she was inducted in the American Academy of Arts and Sciences and a year later she was in the National Women’s Hall of Fame.

Temple wrote for a lot of magazines like Forbes, Time magazine, Discover magazine, The New York Times and People magazine.

She is the subject of a documentary called „The Woman Who Thinks Like a Cow“ from 2006.

In 2010 a movie based on her called „Temple Grandin“ was aired by HBO. In this movie, Claire Danes played Temple, Julia Ormond her mother, and so on. This movie won seven awards.

In 2006 Temple was in a documentary called „Beautiful Minds: A Voyage Into the Brain“.

In 2011 she was in the documentary series called „Ingenious Minds“.

In 2018 she was in a documentary titled „The Business of Autism“.

Her private life is not very publically displayed but it is known that she hasn’t been married and doesn’t have children.

When asked about it she confirms that she has no interest in growing relationships of any kind, especially romantical.