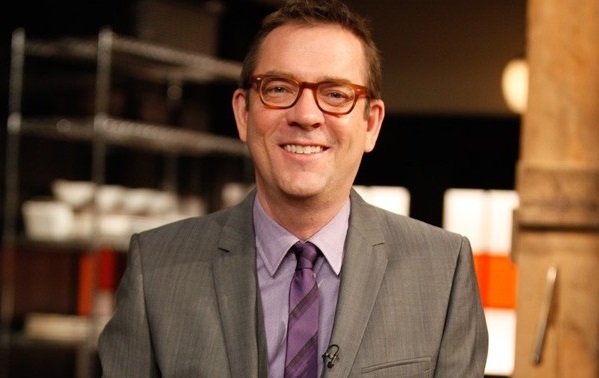 Ted Allen is best known for his appearances on TV as the host of a very popular cooking show called Chopped.

This TV host, author is well-known around the globe, both for his charm and for his cooking talent.

In today’s article we are going to talk about Allen’s personal life, career and all the other fun information you would like to learn about him.

So stick with us if you are eager to find out more.

Edward Allen was born on May 20th 1965 in Columbus in Ohio. Just like every other kid his age, Allen spent most of his time with his friends, playing but he was always interested in cooking as well. We can say that this is a characteristic that separated him from his peers.

He went to the Carmel High School that is located in Carmel in Indiana, and he graduated in 1983. After finishing high school, Allen made it to the Alumni Hall of Fame in 2011. The school inducted him because they wanted to show him appreciation.

Allen also graduated from the Purdue University in 1987 and alongside studied at the Krannert Graduate School of Management.

Eventually, he didn’t end up finishing it, because he began working as an editor for the Lafayette in Indiana, Journal and Courier.

Ted went on to a graduate school where he earned M.A. in Science and Environmental reporting program. He went on to the New York University.

After finishing school, Ted moved to Chicago, because he started working for the Lerner Newspaper, and so his career began.

Since there is no more information about his early years, we are going to talk about his career path and personal life.

After moving to Chicago and started working for Lerner Newspaper, he began with writing criticisms for restaurants in a column. He wrote on bi-weekly basis and this is when he got interested in cooking and restaurants in general.

His column was called The Farmished Four, and he wrote the column together with Barry Rice, why was the entertainment editor.

Funny fact is that Barry is today Allen’s husband, since two of them fell in love while working together on the papers.

After getting tired of the job he did in Chicago, he decided to become a freelance writer and he started writing for various magazines. He wrote about food, about wine and all related subjects. He was the co-author of the Things Man Should Know. Besides these jobs, he worked for GQ magazine, Food and Wine, Bon Appetite and Epicorious.

Even though Allen was mostly present in the papers, in 2003 he got an opportunity to work on a show called Queer Eye for the Straight Guy.

On the show, he was working as a wine specialist. Allen fell in love with the concept of working with food and wine, so he continued on by appearing at the Food Network’s Iron Chef America.

Ted also hosted six documentaries under the name Uncorked: Wine made Simple that was aired in 2007. He also appeared in the Top Chef show in the season’s 3 and 4. He appeared as a guest judge in the two seasons before the seasons 3 and 4.

Ted also appeared in Food Detectives in 2008 and a show called Chopped, which he is most famous for. The show Food Detectives returned for another season and Allen was in total of 13 episodes. Certainly the show that everyone knows him for was the show Chopped.

He filmed a total of 450 episodes and the show aired on Food Network. He often speaks about the show and how much he enjoyed filming it and being a part of this project.

After being a regular employee at the Food Network, Allen appeared in many shows such as The Best Thing I Ever Ate, Beat Bobby Flay, Cutthroat Kitchen and many more.

In 208 he briefly returned to Chef America where he was a co-floor reporter. The episode he was in was the one devoted to Thanksgiving dinner.

In 2012 he was a sous chef for the Iron Chef Masaharu Morimoto in a Holiday Battle.

Ted Allen has a net worth of 5$ million. Most of the money he has is the result of his constant participation on various shows on Food Network and many others. He has been a vital part of the network for many years, and it is no wonder that his net worth is measured in millions.

Ted Allen was born in Columbus, Ohio on May 20, 1965. He studied at Purdue University, graduated with a degree in Psychology, and finally received an MA in Journalism from New York University’s Science and Environmental Reporting Program.

He appeared on television shows such as’ Queer Eye for Straight Guy,” The Best I Ever Ate’ and’ Chopped’ which increased his net worth by $5 million.

He is an author and television personality from Columbus, OH. Cookbook who hosted Bravo’s Queer Eye for the Straight Guy in 2003 and the cooking show Chopped in 2009. Ted Allen is a part of television show hosts and famous celebrities on Net worth Stats.

Edward R. Allen was born on May 20, 1965 in Columbus, OH. He is best known as a host of television shows. He studied psychology at the University of Purdue and earned his degree in 1987. He worked in the Lafayette, Indiana, Journal & Courier as a copy editor.

He’s about the survival of America. In contrast, there are currently no specifics of his cultural background. He was born as Edward Allen and during his youth he grew up in Carmel, Indiana. In addition, because of his morning, he was passionate about cooking.

Allen graduated from Carmel High School in Carmel, Indiana, thinking about his education. He also earned a psychology diploma from the University of Purdue in 1987. He also studied in the Krannert Graduate School of Management at Purdue. But he left to take up a job in the Lafayette, Indiana, as a copy editor.

Barry Rice has been engaged to Ted Allen since 2013, an American writer and television personality. The pair is a gay couple openly.

The host of the Food Network, Chopped, is his husband Allen. The graduate of New York University has worked as an author of’ The Food You Want to Eat: 100 Smart, Simple Recipes.’ Since 1997, Ted has been serving as an editor for Esquire magazine. He has worked in the Chicago journal as a senior editor.

Speaking about Rice, he is an interior designer who designs contemporary interiors with an emphasis on custom furnishings. In 2013, he opened Full Circle Contemporary, which includes the designs of antique furniture.

Three years have already gone by, the couple are legally together. Now, in New York, the couple are staying. They seem to support each other quite, which has made their relationship so strong and can stretch it this far. We wish them a healthy relationship for a long time.

In 1993, Barry and Ted began dating. Ted revealed on June 26, 2013, via his Instagram, that he and Barry were engaged after two decades of their marriage. Ted and Barry’s path to marriage began as California’s Proposition 8 was upheld by the high court.

Barry Rice exults his son, Ted Allen, at a net worth of $5 million. Mostly from his career as an American television host, Ted has earned his wealth.

Ted received money from the TV series, Iron Chef America: The Show from 2005 to 2013 for his role as ICA Judge and Commentator. Similarly, since 2009, he has earned his Food Network rewards for his long appearances on the Chopped TV series.

After a lingering two-decade relationship, the couple were not sure whether or not their relationship would move on to marriage. Eventually, news came that brought’ Full-stop’ to the wait of this couple. The Supreme Court finally approved the gay marriage on 2013.

There was no question about their anxious waiting for that particular day and the joy brought by that declaration, and Ted Allen showed his happy gesture by tweeting it.

Together this celebrity couple has a combined net worth of 9$ million.

Both of them are highly successful in their respectful fields and their personal life seems to be nothing less ideal.

Hopefully they are going to stay as happy as they are now, for many years to come.