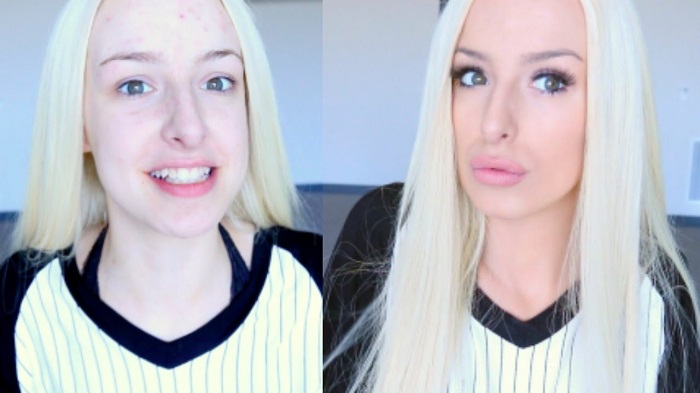 Tana Mongeau is a teenage American YouTube vlogger who discusses her personal life with 2.5 million subscribers of her channel and the one YouTuber who does not at all deceive by using click bait but truly delivers.

She became famous for openly and honestly talking about everything and anything gaining an impressive follow up of more than three million subscribers on YouTube and 1.2 million on Instagram.

Find out all about Tana’s life on and off line, her net worth and social contacts.

Tana was born in Las Vegas, Nevada on the 24th of June 1998. She had a rough childhood. She tried alcohol and weed at the age of only 14, and has been stalked by a boy since the 2nd grade.

Mongeau discovered YouTube when she was 11 and one may say she had spent her early years developing her career.

At the beginning, she was interested in making a fashion channel, but soon realized her personality was more fitting for comedy and vlogging. Following that hunch, Mongeau gained 2.3 million subscribers on YouTube in a year.

Tana now runs two vlogging channels that collectively generate 3.3 million subscribers and 256 million views. The other channel was started on January 2016 and it’s quickly gaining speed to keep up with the main channel.

Her vlog publishes a new video every week, capturing viewer attention with such titles as: “We had sex on a Ferris wheel” or “My stalker took pics of my sleeping body”.

What makes her different form other YouTubers that use click bait to drive traffic – Tana truly delivers, and after watching her video one is not left with a feeling she exaggerated at all by choosing that exact title.

There is no information about her parents or siblings. She is in a relationship with social media star Somer Hollingsworth. They have been together since 2015 and frequently share their photos on Instagram.

Mongeau’s estimated net worth is 700,000$. She earns a portion of it by making tours and selling her own merchandise.

Tana has 1.2 million followers on Instagram. Her real profile on Facebook is private, as there are many unofficial profiles and fan pages under her name.

Tana has a stalker that had been obsessed with her even before she became social networks star. It all started as an ordinary elementary school crush, but progressed to stalking. He called Tana’s house, her parents, followed her at recess and made several social pages dedicated to Tana. The boy was reported to school for his behavior three times in the course of years, but never stopped stalking Tana. Recently Mongeau reported finding odd photographs of herself sleeping in her home that made her believe the stalker had broken into her house.

At the beginning of 2017 Tana had an incident with a colleague YouTuber Ian Carter (who runs the channel iDubbbzTV) that started when she roughly called him out on Twitter for his frequent use of the word “nigger”. Carter responded by attending Tana Mongeau’s show with a VIP ticket in San Francisco, only to pose for a photo with her and use the moment to shout out “Say nigger!” Mongeau reacted by storming out after which security asked Carter to leave. He later published a video explaining he used the word in a comedic context.

She spends free time traveling and getting into all sorts of adventures with her friends.

Tana is a big fan of Kylie Jenner.

Tana Mongeau is a teenage American YouTube vlogger who shares unbelievable and interesting stories from her personal life with more than three million subscribers on YouTube and 1.2 million on Instagram.

Although her videos at first glance do look like click bait, Tana does not fail to deliver to the audiences expectations. After watching her videos one is not left with a feeling she at all exaggerated by choosing that title. And she uses titles like: “We had sex on a Ferris wheel”.

The teenage social star makes tours and sells merchandise, earning a net worth of 700,000$. She is in a relationship with social media star Somer Hollingsworth since 2015.