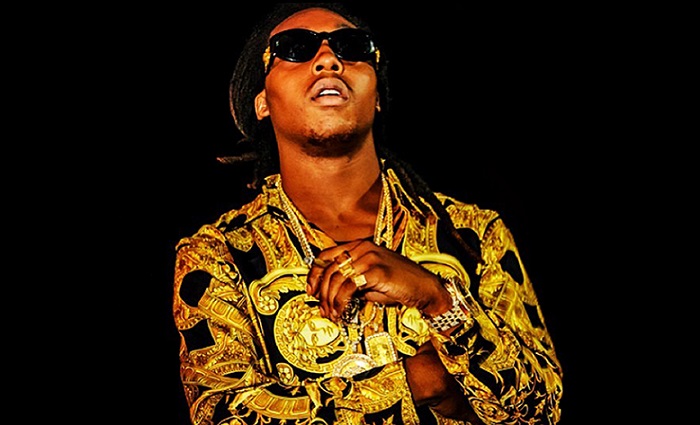 Takeoff is a known American rapper that was a part of the super famous hip hop trio called Migos. Other two members were Offset and Quavo.

Takeoff was involved in a few controversies, just as his friends from the group.

Takeoff was born on June 18th, 1994 in Lawrenceville in Georgia near Atlanta, in the United States by the name of Kirshnick Khari Ball.

Takeoff was raised by his mother, who is a hairdresser and he spent his childhood with Offset and Quavo because they were family.

His father left the family while Takeoff was a baby and he never met him nor is his father involved in his life.

His mother is an older sister of Quavo so he was close to him from an early age. Quevo is Takeoff’s uncle while Offset is Quevo’s cousin and they became, even more, close through music.

Takeoff was a big fan of hip hop since he was very young, in the 7th grade. It was about the same time that he started taking rapping more seriously.

Takeoff often performed in school and in local events and was pretty popular in his part of town.

Takeoff started rapping back in 2008 with both Offset and Quavo who asked him to join their group. The group started performing under the name Polo Club but they eventually changed it to Migos.

On August 25 in 2011 the group decided to release their first ever full-length project. It was a mixtape named „Juug Season”.

They followed this mixtape with another one that they released on June 1st in 2012 and it was called „No Label”.

The group got attention and started being more famous after they dropped out a single called „Versace” back in 2013.

An extremely famous Canadian rapper called Drake remixed this song and it rose to number 99 on the Billboard Hot 100 chart and also rose up to number 31 on the Hot R&B/Hip-Hop Songs chart.

After that success, they decided to release an album, and they did so in July of 2015. It was called „Yung Rich Nation” and got the 17th place on the Billboard 200 chart.

It featured several guests like Young Thug, Chris Brown and it was produced by Murda Beatz and Zaytoven.

” Fresh Dressed ” is the name of the documentary from 2015 in which Takeoff appeared. It was his first movie appearance.

It was in 2016, that Takeoff appeared in his first TV show an episode of comedy-drama series named Atlanta, and in an episode which was titled: “Go For Broke”.

When Migos dropped their single „Bad and Boujee“ with Lil Uzi Vert in 2016 it instantly peaked on the first position on the Billboard Hot 100 on January 21st in 2017.

This single did extremely good and was certified platinum four times by the RIAA (Recording Industry Association of America).

However, Takeoff wasn’t featured on the video of this song because at that time he was busy recording other material.

During the filming of Everyday Struggle by Complex at the BET Awards in 2017, on June 24th to be exact, Takeoff was questioned about not being on the video by DJ Akademiks and Joe Budden.

He replied with „Do it look like I’m left off „Bad and Boujee“?“ and resulted in an argument between the Migos and the host Budden but was soon stopped by security. Budden left the set in outrage.

Migos then released their second studio album on January 27th in 2017 and it was called „Culture“.

It was a major success and debuted at number 1 on the US Billboard 200. In the first week of release about 44,000 copies of the album were sold which was a big deal for them. In July 2017 the album got its platinum certification.

After they released „Culture“ they decided to make another album and name it „Culture II“.

It was released on January 26th in 2018. This album also debuted at number 1 on the US Billboard 200. In the first week of the release, they sold about 38 thousand copies of this album.

On November 2nd in 2018 Takeoff released his first debut studio ablum as a solo artist called „The Last Rocket”.

It was released by Capitol Records, Quality Control Music, and Motown. Before this album Quavo released his solo album too, called „Quavo Hunch” and it also made Offset to release a „Father of 4″ the next year. That’s how they all started to develop their individual careers.

The Last Rocket was received well and debuted in the top four on the Billboard 200 as well as R&B/hip-hop chart.

Migos was supposed to headline a Georgia Southern University’s 2015 Spring concert on April 18th in 2015 at Hanner Fieldhouse.

The show started normally, at 7 pm with several opening acts, but the trio was one and a half hour late for their performance which was meant to start at 9 pm.

Although they had to perform for a minimum of 45 minutes, they performed less than 30 minutes and left the stage. The audience was outraged about this situation.

At the same concert, both the University Police Department, the Bulloch County Sheriff’s Office, and the Statesboro Police department were present and detected a strong smell of marijuana from the Migos’ vans.

Officials were always aware of the trio’s reputation but it was allowed for them to perform because the student body voted for them among seven other acts.

Also, the ticket sales were used to pay for the concert along with student fees.

Migos were supposed to get $30 000 for the performance and their promoter Big House Collective was supposed to receive $3 000 as an addition.

At first, the university didn’t want to pay due to their late arrival, short performance and illegal action but decided to paid them although they weren’t very responsible.

Takeoff and Quavo along with other 6 people were released by the Bulloch County District Attorney’s Office on April 20th, 2015.

However, Offset and six other individuals stayed in custody without bond. This situation caused them to announce on April 28th in 2015 that they have to delay the upcoming Yung Rich Nation Tour for July.

Takeoff was taken off a flight after he refused to move his bag from the floor to the overhead storage on July 7th in 2017 on his flight from Atlanta to Des Moines in Iowa.

Takeoff with other Migos members was involved in a shooting accident that happened in March 2014 close to Miami.

An unknown shooter shot the van with a trio inside from another vehicle next to them. Migos were unharmed but some of his company were injured.

At one time it was rumored that Takeoff had a romantic relationship with a famous pop singer Katy Perry, but those were only rumors. They apparently met when Migos was featured on her song called „Bon Appétit“.

The other rumor connected to Takeoff was that he had a short but passionate affair with London Dallas, a known stripper who he met in the summer of 2017.

This was very interesting to tabloids, especially because London herself posted a photo of Takeoff sleeping in her bad.

Takeoff is very known for his love of golden jewelry. He has an enormous amount of it and wears a lot of it every day.

Takeoff is of the Christian religion and it is known that he is pretty conservative and even homophobic. He is very much against same-sex marriages and is especially against drag queens.

He and his group once refused to sing as guests on a Katy Perry concert because she had drag queens also as performers alongside Migos.

Takeoff is known for carrying a bag with thousands of dollars wherever he goes. Other members of Migos do the same.

Pierre “Pee” Thomas, the CEO of Quality Control, their record label,  bought him a  brand new Roll-Royce Wraith for his birthday in 2018. Before him, Quavo received a new Lamborgini for his birthday and it seems that the label appreciates Migos very much.