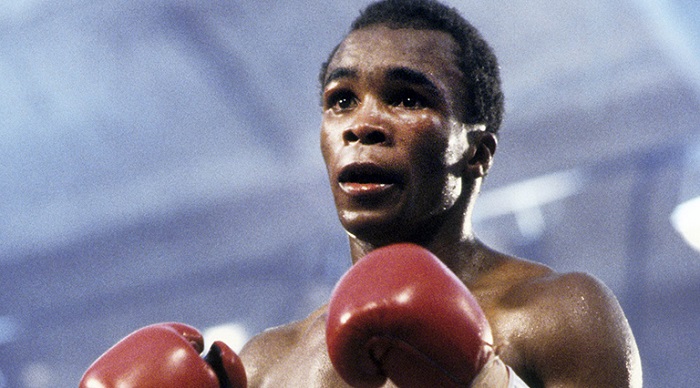 Sugar Ray Leonard is an American ex professional boxer and a known motivational speaker, who is often named to be one of the greatest boxers ever.

Sugar Ray Leonard is an American ex professional boxer and a known motivational speaker, who is often named to be one of the greatest boxers ever.

Ray Charles Leonard was born on May 17, 1956 in Wilmington in North Carolina. He had six siblings and he was the fifth of them.

When he was three years old the whole family relocated to Washington, D.C. They have finally settled in Palmer Park in Maryland when he was 10 years old. His parents had a good marriage and they were both employed. His mother worked as a nurse in the hospital and his father was a night manager in a supermarket.

He was a pupil at Parkdale High School. He had a very peaceful childhood since he was very shy and had just a few close friends. He loved animals very much and was very attached to his dog.

In 1969 Leonard started boxing, following his older brother who already boxed. They boxed at the Palmer Park Recreation Center and Leonard’s older brother Roger was trying to form a boxing team. He found two former boxers to volunteer as coaches to the team. After Roger won a few trophies he showed off in front of Leonard trying to convince him to start boxing seriously.

In 1972, after boxing in the featherweight category for a while, he lost his first fight, against Jerome Artis. In order to box at the Eastern Olympic Trials he lied about his age because it was stated that the boxer has to be at least 17. Leonard was 16 at the time.

Next year he won the National Golden Gloves Lightweight Championship which was a very great success.

In 1974 he lost his last two matches as an amateur.

In both 1974 and 1975 he won the National AAU Lightwelterweight Championships, including the ones at the Pan American games.

In 1976 he finally made it to Olympic Team and that team is considered as one of the best in the American history.

In the Olympic finals he fought against Andred Aldama, who was known as a knockout artist. He gave him a knockout in the final round and won an Olympic gold medal in the light welterweight.

After that he returned to school which was his own wish. Citizens of Glenarden in Maryland gave him a scholarship to the University of Maryland where he planned to study businesy administration and communications.

His plans changed after he was asked for child support payments. He got a lot of negative publicity due to the paternity suit so he lost the potential endorsement which usually follow Olympic gold medalist.

At the same time his father was hospitalized and his mother had a heart attack. After that Leonard decided to turn to professional boxing, because he know he couldn’t finance himself through college.

He entered into the professional boxing world through an attorney called Mike Trainer who convinced a few of his clients to finance Leonard. He also brought Muhammad Ali’s trainer Angelo Dundee to work with Leonard.

His first match was in 1977, in Baltimore where he defeated Luis “The Bull” Vega and with those earnings he payed back his loan from Mike’s clients.

After more than 10 matches he fought with first serious oponent, Floyd May Weather, and he won him by Knockout.

In 1979 he won the NABF Welterweight Championship. After that his statistics were 25-0.

In 1979 he fought against Wilfred Benitez at Caeser’s Palace in Vegas and received $1 million dollars for his victory.

The first big match in 1989 was against Dave “Boy” Green, and Leonard knocked him out too.

In 1980 he lost a fight against Roberto Duran with a very light decision.

The rematch with Duran came at the end of the same year in New Orleans where Leonard won by tehnical knockout. After the match Duran said he was retiring from boxing, which came as a shock to everyone.

In 1981 he moved to middleweight devision and won his first match to Kalule and Middleweight championship two years in a row.

In a fight known as “The Showdown” he fought against Thomas Hearnes in Las Vegas. The boxers both won a few rounds but ultimately the fight was stopped after Leonard gave some punches to Hearnes.

In 1982, Leonard announced his retirement, but the very next year he returned saying that he misses the competition. Some of his fans tought that it was a risk because he surgically repaired his eye which was hurt in the match with Duran.

In 1984, after a fight with Howard, he announced his retirement again.

He came back to the ring again in the match against Hagler in 1987, and again in 1988 against Lalonde.

His last comeback was in 1996 when he came out of retirement to fight Hector Camacho. This fight ended with Hector giving Leonard only knockout in his whole career.

In 1973. Leonard’s high school girlfriend Juanita Wilkinson got pregnant and they decided to have the baby. They decided to get married after he comes back from 1976 Olympic Games. During that period she lived with her parents.

He married Juanita in 1980, and their son Ray Jr was a ring bearer at the ceremony.

In 1990 Juanita filed for divorce claiming that he abused her many times while he was drunk.

Leonard publicly acknowledged tat his wife’s accusations are true and claimed he started drinking and using cocaine after his retirement. He confessed that he quit using drugs in 1986, and in 2006 he stopped consuming alcohol.

His mother gave him his name after her favourite singer: Ray Charles.

Leonard almost drowned as a kid when there was a flood in Seat Pleasant.

His nickname “Sugar Ray” came from Sarge Johnson’s (from Olympic Boxing Team) comment about him: “That kid is sweet as sugar”.

He finished his amateur career with 75 knockouts, 145 victories and only 5 lost matches.

He is a member of “International Boxing Hall of Fame” in New York since 1997.

Sugar Ray is the godfather of Khloe Kardashian and appeared a lot on their TV reality show.

He works in charity a lot: he was a chairman of the Juvenile Diabetes Research Foundation.

He won The Ambassador Award of Excellence in 2007.

He released his autobiography in 2011 under the title “The Big Fight: My Life in and out of the Ring” in which he revealed that he was sexually abused by an Olympic trainer when he was a teen.

Sugar Ray is a known retired American boxer who had an astonishing career and was knocked out only once.