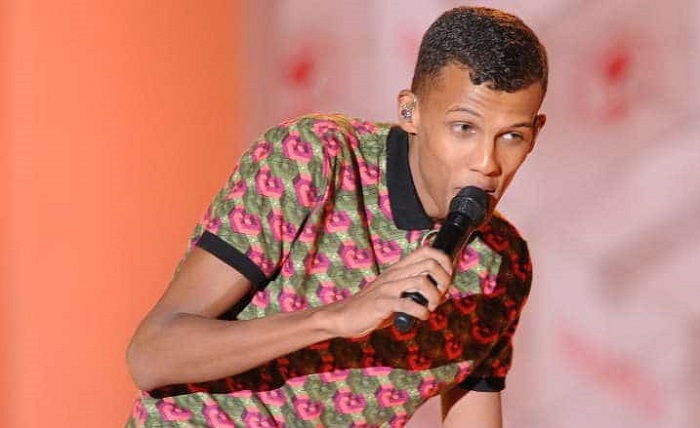 Stromae, whose real name is Paul Van Hauver, is a musician and a rapper who originates from Belgium, and primarily sings in the French language.

His biggest hit was a song from 2009 titled „Alors on dance“ which became a huge hit and earned him not only good critics and reputation but also a big amount of revenue. It was a non-stop going on hit on MTV and that’s how most people that follow him today found him.

He was born as Paul Van Hauver on March 12, 1985, in the town of Erterbeek, near Brussels in Belgium. Many people are weirded out when they realize he is European.

His father is Pierre Rutare and he originates from Rwanda and his mother is named Miranda Van Haver, who is born in Belgium. That explains his exotic looks.

He was only nine years old when his father (who was a very successful architect) was killed in 1994 when he went to Rwanda to visit his family and died in the Rwandan Civil War.

He was killed in the mass slaughter of the Tutsi tribe and it was a horrible thing for his mother and her children to endure.

His mother Miranda continued raising her kids alone as a single mother which was very hard to do but she made a great job at it. Especially after her husband died in such a tragic way.

Paul became a student at the Roman Catholic School after he couldn’t finish the public school due to the lack of interest and the fact that he had no ambitions for any kind of work and no interest in any kind of learning material.

He was really interested in music and hip hop combined with African beats so he has formed a rap group and joined a few of his friends to it. He was hoping that the success he asked for will come easier through a group than individually.

He was influenced mostly by a known Belgian singer Jacques Brel and by Congolese rumba. He said that he loves to look at different cultures and find beauty in them and therefore wants to continue working in many different genres.

He was 18 years old when he started a rap group titled „Suspicion“, alongside J.E.D.I., who was also striving to become a known rapper.

The rapper J.E.D.I. soon decided to leave this group or the duo, to be exact. He thought that he couldn’t actually reach his full potential while in the group and decided to launch his own solo career soon!

In 2001 he gave himself the name Opmaestro which he later changed to Stromae.

He enrolled a private institute to study film and music in Brussels and he decided to focus on his music career rather than on anything else.

It was recognized as a very good music piece so it gained him a contract with the record label named „Because of Music“ in 2008.

He started working at Brussels music radio station called NRJ and was very well liked by the audience but also with the radio producers.

Stromae’s success came on when he was recognized by a music manager named Vincent Verbelen who was very impressed by the artist and who aired his single on the NRJ radio.

It was „Alors on dance“ and it became one of the most listened singles of the month. It gained huge publicity and all of the sudden everybody was asking about this young author. The song soon came to No.1 on all Belgian radio stations and later reached French charts too.

In 2010, his track „Alors on danse“ became a huge hit in Europe and even reached the United States and other non-European countries.

He made a remix of this hit in collaboration with Kanye West who liked this song very much and wanted to make a different production of it.

He was nominated for an award at the MTV Europe Awards the same year. It was in the category for Best Dutch and Belgian Act.

In 2011, he has won the European Border Breakers Award. It was a huge thing for him and he wanted to let everyone know how grateful he was to get this award. It felt like the whole world supported him in what he was doing.

In February 2011 his album named „Cheese“, which had „Alors on dance“ track on it was the winner of Victoires de la Musique Award event in the category for the Best Dance Album.

He met will.i.am who liked his song so the two of them collaborated while Black Eyed Peas came to France for their two concerts.

He even guests appeared on their concerts and joined will.i.am on the stage.

He has released a new single named „Papaoutai“ in 2013.

It was the lead single off his new album named „Recine career“ and the single was released through digital download and charted very high in Belgium and France.

The album was released in the summer the same year. He worked very hard to continue working on his music despite having personal issues, but he managed to move on and his next album was the best album of his life.

He was one of the performers at „Rock en Seine“ festival in France.

One of his singles from the album was named “Papaoutai” and it speaks of his father and his death and it uses African beats more.

He made a video for „Formidable“ which showed him as a drunk who lost his girlfriend. He performed his song at „San Remo Music Festival“ where he was invited to come.

In 2014, his single „Ta fete“ became the official song of the Belgian football team while they appeared at 2014 World Cup.

He also had his first TV appearance in the US as a guest on „Late Night with Seth Meyers“ on NBC. He started his tour through the States around the same time.

He worked on the soundtrack of the hit movie „The Hunger Games: Mockingjay“ after he was invited by Lorde to do it. Lorde is Stromae’s big fan and visits his concerts whenever they are near to her.

Kanye West and Diplo are some of the other musicians who worked on this music.

Stromae’s second single was „Carmen“ which had a social message about the danger of addicting to social platforms such as Twitter and Facebook.

In October 2015 he had a concert at the Madison Square Garden which was a big thing. He became the 1st performer that succeeded in selling out the event and who sings in French, not English.

In 2015 he released another song with a deeper meaning called „Quand c’est?“. This song is talking about cancer.

In 2016 his album reached two million sold copies in France. In the spring of 2018, he has released a new single named „Defiler“.

Defiler came in top 10 really soon and gained him more fame and fortune. „Defiler“ was made in collaboration with his brother Luc.

His fashion line „Capsule 5“ started selling all over the country. The main fashion label is named „Mosaert“ (coming from Maestro).

He co-produced the music video for Dua Lipa and her single „IDGAF“.

He is married to Coralie Barbier since December 2015. Their ceremony was very private and they were secretly married.

Their first son was born in September 2018. As for his family, he is very happy to have 4 siblings.

He is very close to his three brothers and one sister.

Before he married he dated Tatian Silva from 2011 to the end of 2012. She is a model and is known mostly because of her title as Miss Belgium.

Their marriage was a secret for anyone and it seems they didn’t share the information with their guests who were invited to a party but ended up being guests on a wedding.

His name comes from the word Maestro and is a game of words.

He has a very unique personal style and he dresses in an interesting way similar to the 70s fashion.

He is known for his wide line of bow ties he owners.