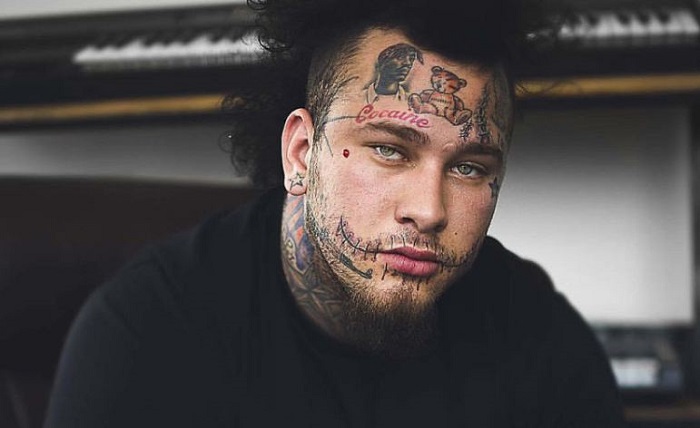 Phillip Katsabanis is an American rapper who came to fame for his hit single “Brick In Yo Face”. He is widely known by his interesting stage name „Stitches“.

He also got a lot of attention after he was knocked out by Wack 100, The Game’s manager. This was a lot of controversy, but it ended up bringing him more attention that was converted into fame.

Before his stage name Stitches, he was going by a name Lil Phill.

In 2014 he started his music career by releasing his first mixtape ever. It was called „No Snitching Is My Statement“. A year after, he released his debut album called „For Drug Dealers Only.“.

Stitches was born in June of 1995 in Miami, Florida, United States. His full name is Phillip Nickolas Katsabanis. He said that Miami was not the right place to grow up at that time since there were many problems going on and it was just not safe.

He was born to Alexander and Esther Katsabanis.

His father originated from Greece so he has such an interesting surname. His looks don’t really show that he has European roots.

His parents divorced when Phillip was only one year old after a long period of arguing and trying to solve their marital problems. In the end, they could not resolve it so they went different paths.

The children were left with their mother and it was a hard job for her because she had to provide for them which some days seemed incredible.

Both of his parents are apiarists and have published a lot of treatises that focus on the topic of beekeeping. This interesting hobby never ended up being something Phillip enjoyed and he hated that his friends often made fun of him because of what his parents do.

He is of Cuban and Greek descent but was raised in the United States, in Kendall in Florida, to be exact. Kendall is a suburb of Miami.

He has two brothers, Dimitri and Alex Jr with whom he is still close. He tries to spend a lot of time with them, but can’t really because he has a very busy schedule now.

He went to the John A. Ferguson Senior high school before he dropped out. Well, he didn’t exactly drop out himself, he was expelled after he punched the principal in the face.

He always had a temper and it often made troubles to his mother.

When he was little he always had problems with his temper. Because he didn’t have any money at that time, he started selling illegal substances like cocaine and also guns.

It was all after he decided to move to South Beach in Florida where he hopes he will get a better chance. He wanted to start a new, productive life and start to earn his own money so he could distance himself from the toxic relationships he was in.

He made and released two mixtapes after that, they were called „Brick Bible” and „Supple and Demand” that was released a bit later.

People loved his work and because of it, he made his debut album later. This album was called „Brick In Yo Face” and it made him famous and better known.

The music video of this track got more than 28 million views on his YouTube channel.

The WorldStarHipHop helped Stitches a lot, regarding his popularity. They would often post about him and that is the reason why he was never forgotten- he was constantly mentioned there.

Some of his more popular songs at that time were „Mail“ and also “I’m Just A Gangsta”. They were in a mix that he made with few DJ’s. Some of them were DJ Ace and DJ Cinemax.

After he released his second album titled „Tales of a Drug Lord”, he made his way into the hip hop industry. Tracks like „Pain and Success” from it were very well known.

This album was inspired by Gucci Mane, along with Juicy J and Wiz Khalifa. Those are some of his favorite rappers whom he admires and highly respects especially since they all came from poverty like him.

Although he had great music, he had a lot of problems with his image. He was often stereotyped. People perceived him as violent because he had a temper.

It was mostly because he still had some anger issues and got into fights easily. But his personality wasn’t bad. Many peoplei in the media tried to make him look bad, while others were pretending he was a victim of home abuse. He never wants to get involved into controversy.

In 2017 he was even arrested for drug and gun use. This was a very controversial time in his life and many of his fans were getting suspicious about his life.

Stitches stated that the reason that he has face tattoos is that he wants people to take him seriously, be afraid of him so they don’t mess with him.

The tracks he makes were often disapproved because of the topics such as offering pregnant women drugs and sharing weed with teenagers and similar.

He states that he wants to be a “positive”  rapper now and that when he looks at the video he did when he was 18 or 19 years old he can not say anything but “Who is this man?”

He totally changed his daily routine, when he was drinking a pint of lean, using cocaine, Percocet, Xanax, and other meds.

He says that he is lucky to be alive because of the number of drugs he used.

Stitches also trademarked his name, which means that he now owns the word.

He has a lot of tattoos but states that every single one of them has a bigger meaning and that he hates to be judged because of it.

Stitches has an AK-47 tattoo positioned on his face. He got that tattoo when he was only 16 years old. He tattooed it because it’s his favorite gun.

He has the word Cocaine tattooed in red above his eyebrow and also a teddy bear in the middle of his forehead. These tattoos are contradictory but he likes it.

He has tattoos of actual stitches on his face, symbolizing his stage name.

In 2017 he got a tattoo of his son’s face on his cheek. He stated that he was the best thing that happened to him and that being a father is a huge thing for him.

In the past, there was a rumor spreading that Stitches was dead. There were even some images on social media that talked about his death. It was later revealed that it is not true.

It was believed that he was shot in the club called „Miami Gentlemen“. However, those rumors were just a publicity stunt.

In 2012 Phillip married Erica Duarte and they were married for 5 years, up until 2017 when they decided to get a divorce. She is a judicial assistant.

They married when the rapper was only 17 years old. There is a huge age gap between them, Erica is eleven years older than him. They have 3 kids together, Evelyn, Rex, and Rocco. Their oldest child is Rex and he was born in 2013.

2014 was the hardest year for their marriage and there was a big controversy on one of the events where Stitches performed when he did something terribly wrong (offered women in the crowd drugs) so his wife came out on the stage yelling at him and slapped him in front of everyone.

That made him throw his mic and run off the stage while the angry audience yelled at him.

He ran into his car and later had to pay the organizer the money he owed for not completing the show.

In a recent video he talked about how he started doing harder drugs and now only smokes weed. Now he puts the well-being of his children first but is still not treating himself properly.