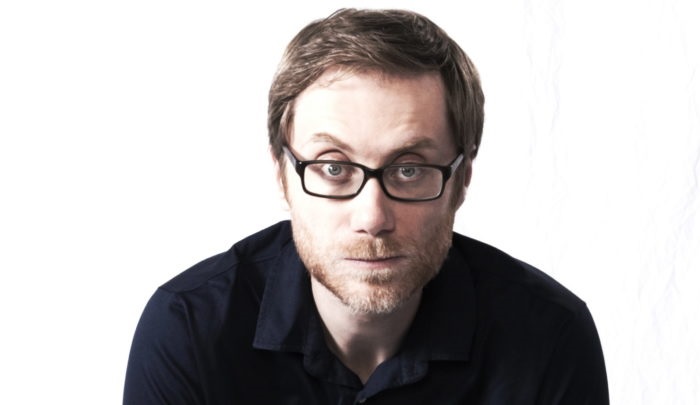 Stephen Merchant is a known English actor, writer, and comedian from Bristol whose skills brought him several awards in his field, from the Golden Globe Wawrd to BAFTA award.

He is known for his role in Logan, a superhero movie filmed in 2017.

He was born as Stephen James Merchant on November 24, 1974, in a suburb of Bristol called Hanham. This city is located in the region of Gloucestershire.

Stephen was born into a middle-class family of Jane Elaine and Ronald. His mother Jane worked as a medical nurse while his father was a construction worker and a plumber. After finishing elementary school, he had become a student at Hanham Woods Academy, a high school near his home.

After finishing high school and getting a high school diploma he enrolled in the University of Warwick which is commonly known as Warw. This is a public university located in the Coventry region. He was s student there from 1993 until 1996.

He has earned his degree there and the degree is from the field of Film and Literature. During his studies on the University, he worked on Radio Warwick, the university’s radio station where he was hired as a film reviewer. He also had his show called simply „The Steve Show“. After he became popular many of the tapes from his show have been rediscovered and placed online.

Before he became a known comedian he had to start where most comedians start: in the comedy clubs. He started performing „Comedy Box“ soon discovering that being a stand-up comedian is not easy.

In 1997, he became one of the contestants in a TV game show named Blockbusters. At the same time, he gained a radio gig and became a DJ on a local station called Radio Caroline.

In 1997, his career took a different path after he was introduced to Ricky Gervais, a known comedian who worked on XFM London radio station. Ricky liked Stephen so he hired him as his assistant. The two of them eventually started working on a radio show and have done it for 7 months in 1998. They both decided to leave the station at the same time because it was bought by another owner.

Stephen tried to improve his chances by joining different shows and contests and so he entered the final round of Daily Telegraph Open Mic Award.

Stephen changed his employes by joining BBC where he was involved in the production. He managed to find a good position in this station and hired Ricky Gervais there too. The two of them started working together again. In 2001, the duo started airing their popular show „The Office“ which was not a big success in the beginning. That is why they returned to XFM and became hosts of „The Ricky Gervais Show“.

This radio show was aired on Saturday afternoon’s and was produced by Karl Pilkington who was very satisfied by this comedy duo.

In 2003, they took a break from hosting The Ricky Gervais Show because they wanted to make a Christmas special for their product: The Office.

Merchant himself was the director of „The Last Chancers“ comedy show. Since he was a very good writer he was invited to co-write several series, such as „Nathan Barley“, a sitcom aired on Channel 5, in 2005.

It was the same year that their product called „The Office“ started airing in the United States. The series became very popular there and eventually won the Golden Globe Award for Best TV series.

Merchant and Gervais became the executive producers of „The Office“ made for American TV.

By the end of 2005, they gained sponsorship by the Guardian, which is a British daily newspaper and they started making their podcast. This weekly podcast was so successful that it was considered to be the most popular podcast worldwide and it was proven when the Guinness Book of World Records certified their podcast named „The Ricky Gervais Show“ as the most downloaded in the world.

They have even made three special installments of their show, like „Podfather Trilogy“ in 2006 because of the huge interest for the show. The last episode of the show was aired on Christmas 2006.

In 2005, Stephen and Ricky started working on BBC’s new sitcom named „Extras“ and they eventually made it to the HBO channel in the United States where they aired in 2006 and 2007.

He liked doing „Extras“ and was especially pleased when he co-wrote a song with a popular musician named David Bowie.

Stephen became a celebrity and won the British Comedy Award for his role as Darren Lamb in the sitcom.

In 2007, Stephen started working on BB6 Music where he had his radio show. The show was not based on comedy as many expected but on „new music“. „The Steve Show“ started airing in 2007 and stopped airing in 2009.

In 2011, Stephen made a return to his first love: stand-up comedy. He went on a tour throughout the United Kingdom and named the comedy tour „Hello Ladies“. This tour was a big success and was eventually released on DVD. One year later he continued touring but this time he went overseas, to Australian and New Zealand.

He also went on a European tour, coming to Scandinavian countries for the first time in 2014. He said that it was very fun to experience all of these cultures all around the world.

This stand-up show was adapted into a sitcom with the same name, and it was aired on HBO in 2013. Ricky Gervais didn’t have any part in this show whatever. It aired for 8 episodes and ended on November 2014 with the special last episode.

Stephen had some small roles in films during his comedy career. He appeared in a cop comedy named „Hot Fuzz“ and a comedy directed by David Schumer named „Run Fatboy Run“, which both premiered in 2007. In 2009 he had a small role in a romantic comedy titled „The Invention of Lying“ which was written by his friend Ricky Gervais who also directed the movie.

Stephen also appeared in a popular TV series „24“, but didn’t have a speaking role.

In 2009, he was involved in the making of a comedy-drama movie named Ce, every Junction which was both written and directed by Stephen and Ricky. It wasn’t very successful and it received both positive and negative reviews.

The writing duo also wrote a script for a sitcom titled „Life’s Too Short“ which aired on BBC 2.

In 2011, Stephen gave his voice to a character in the movie „Gnomeo & Juliet“ and has a small role in „Hall Pass“, an American comedy movie with Oven Wilson and Jason Sudeikis.

In 2013 he starred in a romantic comedy movie alongside Minnie Driver and Olivia Coleman.

In 2014, Stephen appeared in one episode of a world popular TV series named „Modern Family“. The episode he appeared in was titled „Las Vegas“.

He also gave his voice to a character named Wheatley which is a part of a video game Portal 2. He received great reviews for this work. He did the same thing in 2013, two years later, in another game titled „Team Fortress 2“.

His voice appeared in many commercials and ads, such as the ones for Barclays. He says that it’s always a fun experience to do this because seeing the end product is very interesting. Unlike movies, you don’t know what the visuals and the audio combined will look like.

In 2014 he even starred in an advertisement for the Cadillac car. He isn’t a huge car enthusiast but says that he was very interested in the brand.

In 2015 he produced „Lip Sync Battle“. Another of his successes was his appearance in an extremely popular TV series called „The Big bang Theory“ where he played in 3 episodes as Amy’s boyfriend.

He played roles of G. Washington and A- Lincoln in „Drunk History“ TV comedy show aired on Comedy Central.

He was a host of „The Crystal Maze“, a British TV game show which aired on Channel 4. He did it to support a campaign „Stand Up to Cancer“.

In 2017 he became widely popular for his role of Caliban in a movie named „Logan“, which is a sequel of „The Wolverine“. He was happy to work on this project because he grew up watching the X-Men.

He also helped produce an animated series called „Dream Corp, LLC“ aired on Adult Swim. He loves to spend time doing many different things in the media world and always likes to learn about them as well.

In 2018 he made an appearance in a comedy named „Click and Collect“ which was aired on BBC.

He also worked as a presenter for BBC and reported from many different places like Kenya.

In 2019 he appears in „Fighting with My Family“, a comedy movie which he himself has written script for and even directed it. The movie was co-produced by Dwayne Johnson who playes the role in it. movieStephen is the owner of his own company named „SSJM Limited“ which earned him millions of dollars. He is the sole shareholder of the company.

As for his personal life, Stephen doesn’t live in the UK anymore but in Nichols Canyon which is settled in California. Although he moved to the States he still owns his home in London. He says that moving around is a necessity for him, but he wishes that one day he could truly settle down.

Stephen often used his bad dating skills in his stand up comedy lines. Many empathize with him and that’s why they enjoy his performance: he is very honest and very simple as well.

Stephen Merchant is very tall and claims that this is one of the reasons he has little success with the ladies. He often jokes that this is possibly his best quality and that he wishes he was as smart as he was tall.

As a kid, he used to make short movies and once he borrowed a camera to film his comedy sketch show and send it to the Edinburgh Festival. He always liked to participate in creative contests because he found it interesting to create things.

His father worked for an insurance company and he often gave his father small roles.

As for his love life, he is currently in a relationship with Mircea Monroe, an American model, and actress. She is known for her roles in „Scrubs“ and „Anger Management“. She starred in a sitcom „Episodes“. She is a former cover girl of a popular magazine for women called „Maxim“.