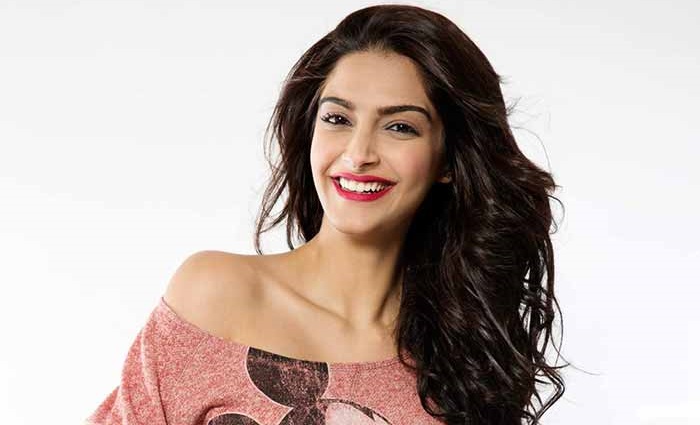 Sonam Kapoor is a very beautiful and popular Indian actress who reached celebrity status in her home country.

At first she was popular there only, but she soon got herself a really great status in the worldwide media.

She is a highly rewarded actress, who received several Filmfare and National Movie Awards. She says that those are her biggest awards and that she is very happy that her talent has been noticed and rewarded.

Sonam is also a very rich Indian star so he has been on the Forbes Celebrity list based on earnings and fame several times.

Sonam Kapoor was born on June 9, 1985, in the suburb of Bombay named Chembur. She has been raised alongside two siblings in the famous Kapoor family.

Her mother is Sunita, a beautiful Indian model and an owner of her own clothing line she designed herself. Kapoor was always inspired by her mother and she said that she is very grateful for the way she was raised.

Her father is a very famous Indian named Anil Kapoor. He is a hit filmmaker, producer, and actor who also comes from a movie-oriented family with his father Surinder Kapoor was a known filmmaker.

Her father Anil owns his own production company and studios mad for the Anil Kapoor Films Company.

Sonam is the oldest child in the family and has two younger siblings. Her younger sister is Rhea who is working as a producer.  He also has a brother named Harshvardhan.

Since the Kapoor family members are often connected to the world of movies she also later developed an interest in it.

She has two aunts who are working in the movie industry: her aunt Mona is a producer and Sridevi is an actress.

Her uncle is a very known actor Sanjay Kapoor.

Her family relocated to Juhu suburb while she was still a baby and she gained her elementary education at the Arya Vidya Mandir school. She was known as a stubborn pupil and always very active. She was often mentioned aa one of the rare girls that bully boys.

She was also interested in sports from an early age and was especially good at sports with the ball, such as basketball and rugby. She was always pretty active and was interested in a bunch of different things.

Sonam was also enrolled in the music school where she learned classical music. She entered a dancing class as well.

Sonam was raised in a religious family so she continued practicing Hinduism and still does. She says for herself that she is quite religious.

When she became a teenager she started being more aware of her looks and was very unsatisfied by it she had weight issues and very troubled skin which ultimately made her feel depressed.

After conducted medical tests the doctors diagnosed her with insulin resistance. It was also discovered that she had polycystic ovaries and had to be treated for it.

Before enrolling the university Sonam went to the United World College of South East Asia located in Singapore because she had a huge desire to learn theatre and arts.

She enrolled the University of East London but hasn’t stayed for long. She couldn’t fit and she was very homesick. She said that this was one of the hardest periods of her life and that she was very sad on a daily basis.

Sonam had hoped that she would someday become a screenwriter or a director because she was very creative and felt that it would fit her perfectly.

Her father wanted to help her so he gave his recommendation to assist Sanjay Leela Bhansali, the director of a film Black, in which their good family friend Rani Mukerji has been acting.

However, during the time she assisted in this movie she fell in love with acting and wanted to see if she has the talent needed for it. It was love at first sight and she quickly made the decision to pursue acting more in the future.

The  Bhansali liked her character and told her that he would cast her in the next movie he will make. He motivated her to lose weight because she weighed 80 kg at that point. She was so happy that she would be given the chance to act in a movie that she lost almost 40 kg.

Her role models in this period were actresses like Waheeda Rehman and Nutan.

In 2007, Kapoor’s debut movie was released in which she acted alongside Mukerji and Ranbir Kapoor. The movie was titled Saawariya and it was produced by Sony Pictures Entertainment.

The movie turned out to be a huge failure and received negative reviews both by the critics and the fans. Although the film has been a failure Sanom received positive reviews and gained her a Filmfare Award for Best Female Debut Role.

Her following movie was titled Delhi-6. She played the role of a singer who tries to start a career in music. This film wasn’t a huge commercial success and the reviews from the critics were mixed.

In 2009 she entered the list of film newbies made by The Hollywood Reporter and was the first Indian actress to succeed in it.

In 2010, she gained a role in a comedy-romance titled  I Hate Luv Storys, where she starred alongside Imran Khan. This movie was the first one in which Sonam had a lead role and the movie was a box-office hit.

Her next role was in a movie produced by her sister Rhea, titled Aisha.

In 2011 she was featured in a comedy movie called “Thank You”. Both Sonam and the movie were graded poorly.

Mausam was the name of her next romantic drama movie for which she again received poor reviews.

The very next year she had her first role in an action movie. The movie is called Players and it was expected that the movie will become a huge hit. Unfortunately it was not commercially successful.

Sonam started being worried about her career because it seemed that she has been playing only in failures.

The movie which changed her career and turned it positive was a drama movie called Raanjhanaa, directed by Anand L. Rai.

Her role in this movie was praised as her best appearance until then although the movie itself didn’t receive an especially positive review.

However, the movie itself turned to be a success and has earned $15 million worldwide.

This movie gained Sonam her very first nomination for the Filmfare Award in the category of Best Actress.

She was often praised for her fashion style so in 2012 she appeared on the list of Best Dressed Actresses in Bollywood.

In 2013 Kapoor briefly appeared in the movie about Bhaag Milkha Bhaag which speaks about the life of an athlete Milkha Singh. This movie ended up to be one of the highest hits of the year.

Although her role in this movie was small, she was praised for her performance.

In 2014, she appeared alongside Ayushmann Khurrana and Rishi Kapoor in a comedy movie called Bewakoofiyaan.

Her next role was in another comedy named  Khoobsurat. She received the nomination for the Filmfare Award although the critics weren’t too thrilled about her performance.

In 2015 she gained a role in a comedy titled Dolly Ki Doli, alongside Pulkit Samrat and Varun Sharma. Once again she had received a nomination for the Filmfare Award in the category of Best Actresses.

In 2015 she starred in Gondal, Gujarat which became one of the biggest hit movies in Bollywood ever. Although some of the critics thought that it was a good performance Kapoor eventually became the winner of the Golden Kela Award for Worst Actress.

She was often included on various magazine lists like the “Most Desirable Woman” list, “World’s Sexiest Asian Women” and Forbes India “Celebrity 100” lists.

Her next appearance was in a video  “Hymn for the Weekend” by Coldplay where she met Beyoncé.

In 2016 she had appeared in a thriller called Neerja. She seriously and thoroughly prepared for the role. Sonam garnered great reviews for her performance and some of the critics consider it the best role in her career.

This brought her the title of the best actress in India in 2016.

She also received the Filmfare Critics Award for Best Actress.

She was absent from the screen in a period of two years so it was in 2018 that she appeared in a comedy-drama movie called Pad Man.

As for her personal life, Sonam got married to a rich Indian businessman Anand Ahuja the same year. They had a traditional Sikh wedding.

Just a few months after the wedding she appeared in a movie called Di Wedding, which turned out to be a hit movie that earned $19 million at the box office.

Still, in 2018 she starred in a movie called Sanju, which is the biopic movie of the actor Sanjay Dutt. The movie turned out to be a huge hit and one of the highest-grossing Hindu movies.

In 2019, she appeared in the movie Ek Ladki Ko Dekha Toh Aisa Laga where her father also gained a role.

She played the role of a lesbian because she wanted to shake the conservative Indian society and break taboos. The film was received poorly at the cinema although she gained good critics for her role.

Her next role was connected to Indian cricket and she was in the lead role. The movie was titled The Zoya Factor.

She had improved her earnings by working with various brands and signing endorsement deals with Colgate, Electrolux, Salvatore Ferragamo and more.

She also serves as the L’Oreal’s ambassador for India.

She received huge amounts for this endorsement deals, going up to $400,000 per one deal.

Sonam is known for her work with charity organizations for various causes.

In 2009, she supported widows and children of film-industry employees through her appearance at the International Indian Film Academy Awards fashion show.

She is known for her support of the LGBT community which she shared with her role as a lesbian in one of her movies. In 2017 she released a trailer for a gay movie Sisak.

She also gave her clothes for an auction to help raise funds for the Smile Foundation.

Kapoor also worked to help the Defense of Animals organization.

She was involved in the creation of a music video for the song “Dheere Dheere”, which was made to raise charity funds.

She is especially worried about children so one of the things she does is raising funds to help children who have cancer.

In May 2018, she got married to her longtime boyfriend Anand Ahuja. The ceremony was private and was made in a traditional way.

Anand is the CEO of an apparel and brand sneaker company and is a capable businessman with high earnings.

They had their honeymoon months after the wedding because they had obligations and couldn’t go earlier. They visited Japan.