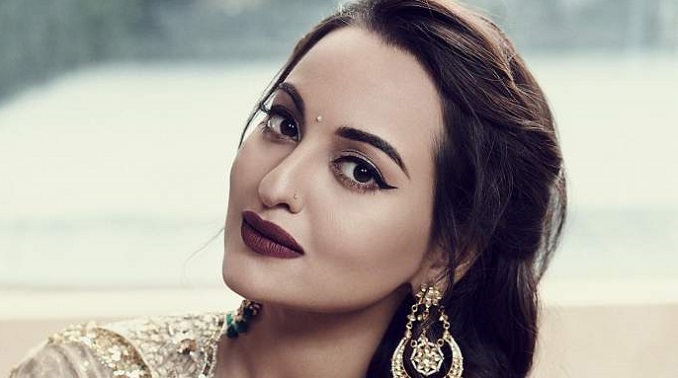 Sonakshi Sinha is a very beautiful Indian singer and actress whose career began in the form of costume designing, but she fell in love with the film industry and became a prominent and very famous movie and media personality.

She was born as Sonakshi Sinha on June 2nd, 1987 in the city of Patna located in the eastern Indian state called Bihar. Her parents are both film actors and they enjoy their job very much.

Her father named Shatrughan Sinha is a very famous actor and is also very involved in Indian political life. Her mother is an actress as well, she is very famous in her birth town, and she used to spend a lot of time as a fashion model when she was younger.

Her name is Poonam Sinha. She has two brothers named Luv Sinha and Kush Sinha. They are twins and are older than she is.

She used to be a student at Ary Vidya Mandir high school and she was always interested in fashion and costumes. It was her creative outlet and she used to spend a lot of time designing various things that she or good friends could wear.

She enrolled the Premlila Vithaldas Polytechnic University where she studied fashion design, supported largely by her mother who, as mentioned, has been a really big name in the fashion industry.

She soon got a job as a costume designer and made costumes for various films.

In 2005 she designed and chose the costumes for a movie named Mera Dil Leke Dekho.

She did it for a few years until she decided to try herself out in acting since she saw that she resonated with the actresses.

It was in 2010 that she first appeared in an action-comedy movie Dabangg where she starred alongside Salman Khan and Om Puri.

The movie turned out to be a huge hit and a blockbuster. It was the biggest hit of 2010 which earned over 40 times the budget invested in it.

It also gained several awards, because it was so good. She gained a lot of good reviews which please her since it was her debut role and it was made to launch her into some bigger roles.

She was awarded the Filmfare Award for her debut in this movie and she was very proud of herself.

In 2011 she filmed a lot of movies that came out in 2012. “Rowdy Rathore” was an action movie in which she starred with Akshay Kumar and Paresh Ganatra.

It was also a huge hit, even overseas. Her next movie was titled Joker where she again starred alongside Akshay Kumar.

This sci-fi comedy was directed by Shirish Kunder. It was a big flop at the box office and it gained a lot of negative reviews from the critics, which made it not so popular In India, as well as other places.

“Son of Sardar” is her 3rd movie with Ajay Devgn as her colleague. It was an action-comedy that eventually earned $22,000,000 at the box office.

Her next movie was Dabangg 2, which is a sequel of her first big hit that was also released the same year. It was a big success which earned her a lot of praise and money.

In 2013 she had a role in “Lootera”, a historical Romans drama where she starred alongside Ranveer Singh.

Although the movie is just a little over its budget it has brought critical acclaim to both lead actors and Milan Luthria, the director.

Her next appearance was in an action movie called “Bullet Raja”, directed by Tigmanshu Dhulia. With this movie, there was a lot of controversy happening, but it was presented in the Toronto movie festival in 2014, right after their release in 2013. The movie gained mixed reviews.

“R…Rajkumar”, an action romance movie with Shahid Kapoor became her biggest hit that year. Although the critics had mixed reviews about the movie, it turned out to be a big success when it comes to money.

Her performance in the movie was not received with positive remarks, but she did not let that take her down and she continued her career anyway.

In 2014 she appeared in an action movie titled “Holiday: a soldier is never off duty” directed by A.R.Murgadoss.

Her partners in the movie were Govinda and Akshay Kumar the film was received very well both by the public and the critics and has earned a lot of money. This time her performance was praised by all the critics and she was very happy about it.

She made an appearance in the music video from Yo Yo Honey Singh,  an indie-pop singer, and actor. The same year she appeared in the action movie called “Action Jackson” which was directed by Prabha Deva.

Her partners in the movie were Ajay Devgn and Yami Gautam. The film received mixed reviews and did not earn quite a lot of money out of the box office.

Her less released that year was in a drama movie called “Lingaa” which also wasn’t a big hit.

“Tevar” is the name of her action movie which was released in 2015 when she started to act alongside Arjun Kapur. This movie turned out to be a great flop and wasn’t received well by the public at all.

In December of 2015 Sunakshi has released her first single. It was called “Aaj Mood IshQholic Hai”. It was what made with Meet Bros, 2 music directors from Pradesh.

In 2016 she appeared in a thriller called “Akira”. It was distributed by Fox star studios and had moderate success at the time box office.

She also appeared on “Force 2”, an action thriller movie with her and John Abraham in the lead roles. The movie gathered a lot of acclaims but it wasn’t anything extraordinary.

In 2017 she was praised for her role in a comedy movie called “Noor”. The movie directed by “Sanhil Sippy” didn’t earn anything over the budget but it has received some good reviews because of the main actors acting.

Her next movie was a thriller “Ittefaq” which had moderate success in cinemas.

In 2017 she was very proud to announce that she will be an opening act for Justin Bieber and his concert in Mumbai which is a part of his “Purpose world tour”, a very famous tour that has made a lot of money.

In 2018 she appeared in “Welcome to New York”. This comedy movie has been directed by Chakri Toleti and it was very criticized both by the public and the very critics.

Her next movie was released in August in the same year and was titled “Happy Phirrbhag Jayegi”. It was directed by Mudassar and she starred in it with Diana Penty. It was a commercial failure.

In 2019 she appeared in an adventure comedy movie called “Total Dhamaal ” where she performed a song called “Mungda”.

“Kalank” is the name of her next movie which is a drama movie with Madhuri Dixit, Adity Kapoor and Sanjay Dutt in lead roles alongside her.

The film was a huge success at the box office and it has received a lot of critics that was very positive.

She also appeared in a war drama titled “Bhuy: The Pride of India ” with Ajay Devgn and Sanjay Dutt.

She made her 3rd appearance in Dabangg 3 the same year, together with Salman Khan.

She is a huge animal lover so she is involved in a lot of PETA campaigns.

She is also very inspirational to many Indian women since she promotes health, but is not obsessed with her weight and size 0. She believes that it’s very important to talk about these topics in India because they are still neglected.

She promotes self-love with her attitude and the way she talks about herself on social media. She has very big respect for her own body and she was often trolled for being bulky, but she didn’t mind it.

She currently lives in Mumbai, located in Maharashtra.

She has dated Ranveer Singh in 2012 but they went out only a few times. This was a big deal in India because they are both actors from their hometown.

The actress had various endorsement deals with several Indian companies like DIGISOL and CavinKare. Her favorite actresses are Rani Mukherjee and Sri Devi while she mostly enjoys working with Salman Khan.

She likes to eat Indian food but also loves Thai food in Chinese to stop she always tries to go into various restaurants when she is doing some jobs outside of the country.