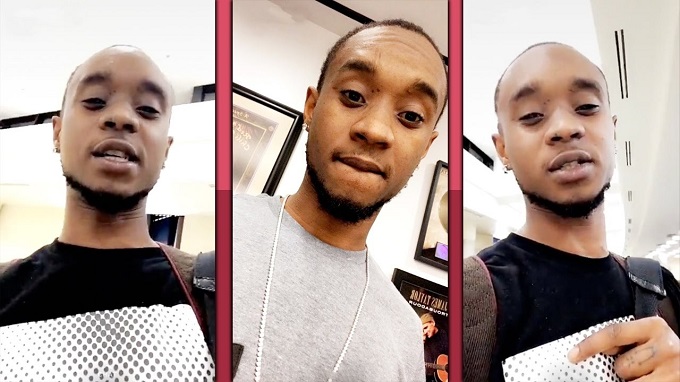 Slim Jimmy is one of the brothers of a famous hip hop duo called Rae Sremmurd.

They became very successful and Jimmy got himself a net worth of aproximately $3 million.

Aaquil Ibinshaman Brown aka Slim Jimmy and his younger  brother Khalif Malikibnsham Brown, aka Swae Lee were both born in Inglewood in California. Slim Jimmy was born on December 29, 1991.

A few years after they were born, their father abandoned them and left them alone with their mother Bernadette , who tried to raise her sons as best as she knew how. They also have an older brother Michael, who also tried to take care of them. They learned a lot from their mother, and one of those things was how to take good care of money: so they decided to make their own in the music industry.

Their mother was often absent from their home, because she worked for the military and was deployed all around the country. They even moved  a lot, until she settled in Fort Hood in Texas.

Since they were home alone a lot, they had to learn how to live by themselves and therefore Aaquil and Khalif had a very special bond since their very young age. They started making music and rapping in elementary school and they always did it together.

Their mother left the army when they both were in middle school, and she found  herself a new partner named Floyd  and the family settled with him in Tupelo in Mississippi, where he had already lived.

His mother had another son with her new husband and he was named as his father, Floyd. Floyd tried to support his family any way he could, even by selling drugs in the neighbourhood. The kids didn’t like that and they sensed that the relationship wasn’t going to last far so they decided to take things into their own hands and start making serious money doing the thing they love: music.

The brothers say that they do fight sometimes and that they are not perfect, but they also claim that their relationship is something special, a deep connection which they have developed since young age. They always put eachother above everything else: music, girls, money… They are eachothers top priority.

For a several years they performed  under the name Dem Outta St8 Boyz.

Their biggest success were singles No Flex Zone and No Type which got a lot of streams both on iTunes and Spotify.

They also made a number with Nicki Minaj, which skyrocketed their fame.

In 2016, this great duo  released their sophomore album SremmLife 2 and they even started their own record label named Sremm Life Crew Records.

Slim Jimmy is currently single, and is not known has he been in a relationship before.

Slim Jimmy always had commitment issues and his brother says it’s maybe because of their childhood. Because of it, Slim Jimmy finds it hard to maintain a healthy relationship and got himself a nickname “the worst boyfriend” because he always breaks up with his girlfriends over text messages.

Their mother and their stepfather have split up soon after beginning of their living together. That caused boys to loose their father figure and start skipping school and working on music. The brothers never actually had a role to look up to except their mother.

Slim Jimmy is really dedicated to music and loves his fans. One time, while doing a performance, he cut his leg on glass in Governors Ball in New York and still continued  performing before being taken to the doctor.

Slim Jimmy is a famous American rapper and a producer who got famous by making a band with his brother and putting all of his energy in it. He is working on the release of his new album this year.