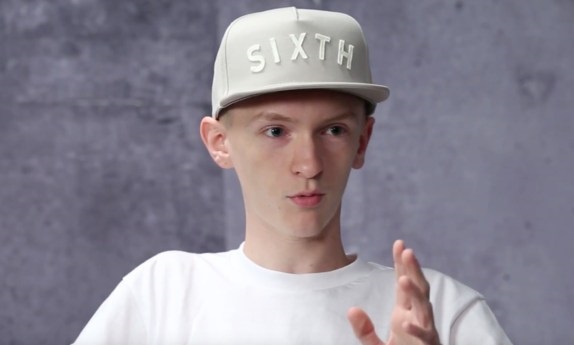 Slim Jesus, real name Robert Church , is a white American rapper who gained a lot of publicity after releasing his single “Drill Time” in 2015 and followed it by a video.

He was born on April 10,1997 in Hamilton in Ohio. His friends called him Swag Jesus which eventually became Slim Jesus.

He is called a “fake white boy rapper” because is bragging with the gang and guns but has neither of the two.

He has a huge hate club but also a lot of fans, so his social media is full of comments.

He released his first official mixtape with thirteen tracks and called the tape “The Most Hated”. He claims that he makes drill music just because he likes listening to it abd his role models are Chief Kief, Lil Bibby and Lil Herb. However, a lot of people claim that his music has nothing to do with drill.

The  video of “Drill Time” caused a lot of controversy and criticism because it showed Slim and his crew bragging and boasting with guns. At the begining of the video Slim Jesus has put a disclaimer which says that all the guns and illegal substances in the video are not for real but merely props.

Lil Master was the first rapper to response to his “Drill Time” with a diss track where he mentions how Slim Jesus stole and copied Chief Kief’s music. This caused a lot of problems and controversy on the social media and it actually ended up making Slim Jesus even more famous.

His personal life is mostly private and the only people that know about it are his haters that tend to tease him.

At one of his performances somebody from the audience took the microphone from his hands telling him that he should leave rapping to someone who knows how to rap. On the other occassion he performed at almost empty club.

It was later discovered that a rapper Black Jesus, used the above mentioned event of taking the mic, as publicity stunt and used that video clip on his own video “Ball So Hard”.

Slim Jesus was a victim of a cyber attack when his Twitter account was hacked by an unknown person. The person posted tweets in which they revealed his true name: Robert Church. He was also accused for voayerism of underaged girls.

Slim Jesus was in a lot of problems because he was accused several times of being a rapist and a drug dealer. People claim that he set those up himself to seem more gangsta and to gain popularity that he couldn’t get himself.

Slim Jesus is a rapper with a love-hate relationship with the nation. His estimated net worth is $300 000.