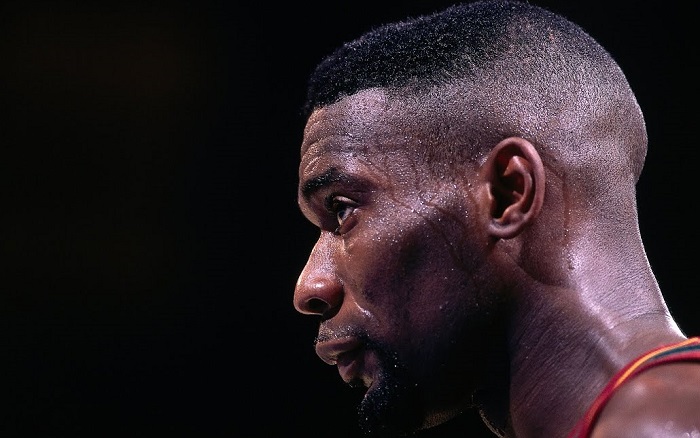 Shawn Kemp is a very known former professional NBA basketball player who played in four teams and was an NBA All-Star six times which puts him on the top of the list of players who made it to All-Star that many times.

He was born as Shawn Travis Kemp on November 26, 1969 in a town Elkhart, settled in Elkhart County in Indiana, United States.

His mother is named Barbara Kemp. She isn’t a very famous person, but they have a good connection.

He started being interested in basketball from his youngest age because he was surrounded by kids who hang out on the courtyard, wishing that they could become one of the great NBA players of that time.

He was a student at Concord High School, in the same city where he already shown basketball skills and was one of the most important players in the school’s basketball team.

He was in his senior year when he was declared in the Top 5 basketball players in the school which is a great success.

He was the leading figure in his team and Shawn took the team to the finals of the state champiomship. Shawn was the most important link in the team who gave others support and forced them to worka as a team.

He was so good in his high-school that he won several different records, with leading score at Elkhart county. As a result, he was a pretty popular kid as well, but most of his attention was always on sports.

Although he had many great achievements he didn’t win the Indiana Mr. Basketball title but instead another basketball player named Woody Austin gained that title.

There was some gossip that he didn’t receive this title because he already made arrangements with the University of Kentucky which is not a part of Indiana state.

It seems that he has made some kind of verbal agreement with Kentucky to continue playing basketball at their university after finishing high school.

This was a way for the states sport directors to punish him for not staying to play college basketball in his home state.

In 1988 he was elected into the McDonald’s High School Basketball team where he played alongside many known stars such as Alonzo Mourning and Billy Owens.

Although Kemp signed a pre-contract with the University of Kentucky to play basketball for them he had to skip his freshman year in Kentucky because he didn’t reach the minimum score on his SAT test in school which was obligatory to get a basketball scholarship there.

This meant that he could go to the University Kentucky to study but could not play basketball there. So it was a gard decision for him to make.

After enrolling the Kentucky University, Shawn was involved in a huge controversy after he was accused of taking gold chains from one of his teammates and pawn it in the pawn shop. The teammate was the coaches son.

Although no charges were pressed against him, Shawn decided to leave the Kentucky University and join Trinity Valley College situated in Texas.

Many of the people in Indiana claimed that he would better be off if he had stayed in his home country.

He didn’t play basketball there but at the age of 19 he became eligible for the NBA drafting process and since his high school achievements were very well known he knew that he will be drafted for sure.

And so he was. At 1989 NBA draft he was soon drafted by the Seattle SuperSonics. He was the youngest player not only in the team but in the whole NBA because he was 19 and didn’t play any college basketball or finish college either.

The 2nd pick of the Seattle Supersonics was Gary Peyton and the two of them became close friends.

Bernie Bickerstaff coached him in his rookie year but he was after replaced by  K.C. Jones who coached the biggest stars in NBA (Charkes Barkley), and who taught him to become a pro in his job.

His teammate Xavier McDaniel took him under his wing and Shawn soon became a dominant player in the team. He just needed help to get used to the NBA gameplay.

At the end of his 2nd season with the team he was already one of the most prominent players and had great numbers and percentage in the game. At that time he gained his interesting nickname that became very catchy and soon everybody started calling him: “Reign Man”.

In 1994, Shawn was a part of the United States National Team at the FIBA Championship of the World in Toronto and the team gained a gold medal there. He was very proud of what he had accomplished and his life upgraded a lot, in financial terms.

He came to the peak of his career in 95/96 season whem his team made it to the NBA finals for the first time since 1979. This was a year for him to remember.

Kemp’s good play gained him a new contract with Seattle Supersonics which would last until 1997. It wasn’t exactly a new contract but the prolongation of the old one which eventually made Shawn angry because he couldn’t gain more money and he was their most notable player.

Since Shawn was not aware that his contract cannot be changed until the end of it, in 1997, he was unsatisfied with the payment he received.

He was at the end traded to the Cleveland Cavaliers where he played three seasons.

He wasn’t as good as in Sonics and he had weight issues all that time but he improved with time, getting to Playoffs.

After 2000 season Shawn, who was still fighting his weight problem, was traded to the Portland Travil Blazers.

But there his career went downwards and he developed not only issues with weight but also with alcohol and cocaine.

The problems became so intense that it was in his very first season with Portland Trail Blazers that he ended up on drug rehab.

He was released from the team after two seasons and ended up playing for Orlando Magic as a free agent.

He retired from NBA 5 years before going to play basketball in Italy, in 2003.

From 2004 to 2006 Kemp promised that he would return to the game but he never succeeded since he had missed most of his scheduled workout with both Dallas Mavericks and Denver Nuggetts.

In 2008, Shawn Kemp started playing basketball for an Italian League basketball team called “Premiata Montegranaro”. He was almost 40 years old. The contract was soon broken and he returned home. At that time his home was wrecked from the Ike Hurricane and his was in problems.

As for the legacy he left behind him, it is known that he is the All time leader in the number of blocks and rebounds ever in the history of the Seattle SuperSonics.

Shawn is married to Marvena L. Thomas and has a son named Shawn Kemp Jr. who is a basketball player for the University of Washington.

His son Shawn is nicknamed “Rain Drop” because of his father but is the best basketball player at the university and is ranked as the 50th in the whole country.

He is a very good friend with his former teammate Gary Peyton and their families hang out together. He says that it was a pretty rough relationship at the very beginning, but it had grew a lot.

He was involved in a huge controversy after he was arrested for the possession of marijuana in 2006. He also had a furearm without permission and was investigated because of drug possession.

Even bigger controversy was risen after it was discovered that he has seven children out of marriage, with six different women and he wasn’t paying child support for any of them. This was a huge problem and was disclosed in the media a lot of times! He kept getting hate comments because of this and had to remove comment sections on some of his social media.