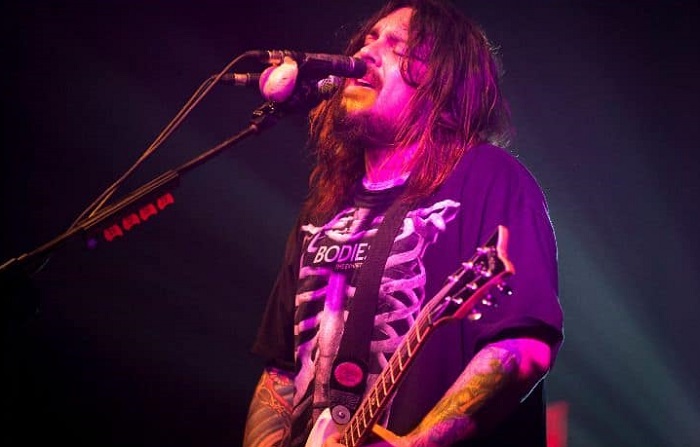 Shaun Morgan is a very respectable musician hailing from South Africa who has built his music career as a guitarist and a songwriter.

The band in which he plays the guitar is very popular in his country and the bend goes by the name “Seether”.

He was born on December 21, 1978 and was given the name Shaun Morgan Welgemoed in Bloemfontain, the capital city of South Africa.

Welgemoed is a Dutch surname and it means cheerful in their language.

Although he was born in South Africa he had spend his young childhood in Zimbabwe, a country located north from South Africa.

He grew up with one parent since they divorced when he was just a little boy. He grew up on a farm alongside his brother Eugene and sister Lucy.

He was never close to his mother because she was very selfish and thought only about herself.

In one interview he said that his mother had left him in the car at night to wait for her while she was visiting a married man.

His father didn’t aprove his music and he kicked him out of his home. That is why he lived in a car for one month and even slept in his friend’s garage until his mother took him back to live with her and his new stepfather.

Morgan regularly attendede the Merchiston Preparatory School after which he entered the Maritzburg College in Pietermaritzburg, where he focused on his rugby career.

He became one of the best players in the team and was predicted with a great career. He spent his first three years of high school training this sport before he sustained a nasty back injury which crushed his dreams of becoming a professional rugby player.

Other than rugby Morgan also loved to play the guitar and was quite good at it. It was maybe unusual for a rugby player to also be a musician but Morgan was very talented.

He was 14 years old when he first learned about Nirvana and its “Nevermind” album. He was mesmerized by its sound and style so he made a firm decision that he will become a skilled grunge guitarist.

Knowing that it is very hard to succeed on his own and being a very big fan of grunge bands he decided to join a tribute band at the beginning of his musical career.

The band mostly made covers of known hits and they mostly did covers of songs performed by T. Petty or Creed.

In the spring of 1999 he formed a band Saron Gas. They have chosen a lead singer and a vocalist before but he never turned up after the audition so the band decided to stick with its original three people version. That meant that Morgan became both the main guitarist and the lead vocal of the band.

Saron Gas wasn’t especially successful but the band gained some attention and a small fanbase through a short period of time.

At the beginning of the year 2000 the bands bass player left the group and the band had to find themselves a new bass player. Shaun Morgan invited a new bass player to join them. He was named Dale Stewart and Shaun already knew about him and the fact that he plays bass extraordinary.

Two years later they have received an invitation from Wind-up Records to relocate to the United States and start making their own original music.

The record label also requested them to think of a new name for the band and they have chosen Seether. Seether is one of the songs performed by Veruca Salt.

Morgan also made a decision to use only Sauhn Morgan as his stage name because his original surname “Welgemoed” was too hard for American people to pronounce.

The band got their first major-label project released in the summer of 2002. The album was named Disclaimer and it was soon recognized by rock and grunge lovers. Two years later it was released again but this time it had several new songs and the album received the title “Disclaimer II”.

After the release of this album, the group had no problem in receiving new gigs, booking concerts and had the independency to work on their new music.

In 2005, the group released a new album named Karma and Effect and it took them two years to release another album named Finding Beauty in Negative Spaces.

In 2011, their album Holding Onto Strings Better Left to Fray was released.

In 2013, Morgan was very honored after he was invited to collaborate with a very famous band called Lynyrd Skynyrd on their “Sad Song”. He guest appeared on this single beside their guitarist John 5. The song was a part of their album Last of a Dyin’ Breed.

Seether’s last album from 2011 was followed by a 2014 album called  Isolate and Medicate.

In 2016 their first live DVD was released and it was titled One Cold Night.

It was the same year he had received The National Council’s Artistic Expression Impact Award of Excellence.

Their last album was named Poison the Parish and it came out in 2017.

When he speaks about his influences he always mentions Nirvana, Portishead, Metallica, Stone Temple Pilots, Black Sabbath and Pearl Jam.

Shaun Morgan was always especially peculiar about his guitars. He started using a Schecter guitar when he started his musical career and the guitar label became his sponsor.

He was loyal to this guitar label until 2019 although he had received a lot of endorsement offers from other guitar manufacturer.

In 2019 he turned to StingRay RS guitar.

As for his personal life he had several romantic relationships but one of his longest was with Amy Lee, the singer of Evanescence.

They started dating in 2003 and were together for over 2 years until Amy decided to leave him because she couldn’t handle his drinking problem any more.

Before he started his relationship with Amy he was shortly married to Jill Holon and he has a daughter Jayde Fourie-Welgemoed from this marriage which ended in 2002.

The reason for their separation lies in the fact that Jill wanted to stay in South Africa after Shaun relocated to the States.

Morgan eventually entered a rehab programme alone in the summer of 2006.

Amy Lee has writen a song about their past together and titled it “Call Me When You’re Sober”.

A great tragedy happened to Morgan in the summer of 2007, when his brother Eugene Welgemoed comitted suicide.

A year before his death, Eugene started working on a low budget movie named  “Brood X Magicada,” where he gained the role of a killer.

It had a huge affect on Shaun and took him to the verge of returning to his bad habits. Morgan and his band tributed a song to his late brother and it was titled “Rise Above This”.

Shaun tattoed the date of his brother’s death on his fingers so he has 1308 tattooed on his right hand, and 2007 on his left hand.

He got engaged in 2006 and became a a father to a son, whom they named Bowie, by the end of the same year.

In the spring of 2011 his third child was born, a daughter named Gracelee.

Today Shaun lives with his fiance Jordan Kirby and they have a daughter named Lily. They are raising her their children in Tennessee.

Shaun is not very active on social media and has just a few thousands of followers on his Instagram where he rarely posts.

The band has their Youtube channel where they upload their videos and shows, which is very lucrative for them.