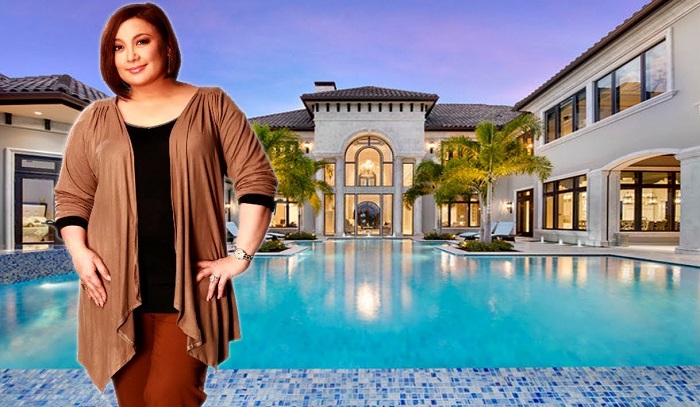 Sharon Cuneta is a singer, an actress and a TV show host from the Philippines, who also worked as a reality show judge and did commercials.

In November of 2011, Sharon went to TV5 Network and left ABS-CBN with whom she was working for 28 years. In 2012 she started doing her talk show „Sharon: Kasama Mo, Kapatid“.

In 2013 she started starring in a comedy TV series called „Madam Chairman“ which aired in October that year.

In 2015 Cuneta decided to return to ABS-CBN where she was one of the judges on „Your Face Sound Familiar“ and was also a coach on „The Voice Kids“ and „The Voice Teens“ after.

She was born on January 6th in 1966 in Santa Mesa, located in Manila. Her mother gave birth to her at Our Lady of Lourdes Hospital. Her full name is Sharon Gamboa Cuneta-Pangilinan.

Sharon’s parents are Pablo Cuneta and her mother was named Elaine (a sister of a known singer and actress Helen Gamboa).

She spent her childhood in San Lorenzo Village and also in Dasmarinas Village located in Makati.

Sharon grew up with parents that loved music. She would often listen to her dad’s huge record collection.

When she was little Sharon appeared in the show by Ike Lozada.

She was also very young when she was in her first movie. It was called „Lovers for Hire“.

Sharon went to St. Paul College located in Pasig and also International School Manila for her elementary schooling. Because she had so many commitments with singing when she was 14 she wasn’t focusing on her education.

When she was 11 she was attending a party with her parents and guests asked her to sing cinderella’s „Bato sa Buhangin“.

After she did so she was noticed by Tito, who is a comedian and a TV host, and she was also noticed by a vice president of Vicor music at that time.

After that, she was invited to make a record by Sotto. They made her first single titled „Tawag ng Pagibig“, She made this song when she was only 12 years old.

The first track that she appeared in and that was on the pop charts was „Mr. DJ“ in 1978.

This song was a hit and it gave her the nickname „DJ’s Pet“. This nickname was later the title of her LP.

At that time she also started her career as a TV host. She started hosting a show „C.U.T.E“ (or „Call Us Two for Entertainment“) and she did so with her aunt Helen Gamboa. This aired on IBC 13.

In 1980 Sharon was recorded singing “Tubiq at Langis” from Vilma Santos. Santos was carrying a child at that time and she had to perform at the Cebu Film Festival. Danny Zialcita asked Cuneta to do it and promised her to make her a big star.

After that, she starred in her first feature film “Dear Heart”. She did so alongside a model Gabby Concepcion. This movie was a success.

Because this movie was so popular, it got a sequel.

In November of 1981 “P.S. I Love You” was released by Viva Films. Cuneta starred in this movie with Concepcion. This movie was a huge success in the box office. After that, they made “My Only Love” in 1982.

Sharon was in a lot of movies where she had a lead role alongside a leading man. Some of those are were “Forgive and Forget” where she acted alongside William Martinez, “To Love Again” with Miguel Rodriguez, and so on.

In July of 1984, Sharon had a huge concert that went on for two nights. It was at the Araneta Coliseum and it was one of the concerts of the year. She actually won an award for this performance as the most important concert made that year by a female artist.

In 1984  Cuneta and Concepcion married at the Manila Cathedral. She was only 18 years old at that time. Their huge ceremony was filmed dan released by the title „The Best of Sharon & Gabby“.

A year later she did another film,  this time it was called „Bituing Walang Ningning. She starred alongside two great actors Gil and Christopher Leon. At that time she was pregnant with her daughter.

This movie was released on Valentine’s Day and was a success at the box office.

She was nicknamed „Megastar“ by the press because of how successful all her movies were in the box office.

Sharon got the FAMAS Award for „Best Performance“ in 1984 for her movie „Dapat Ka Bang Mahalin“. She also got one from the Film Academy of the Philippines for her movie „Sa Hirap at Ginhawa“.

In 1986 she was in 3 big movies: Captain Barbell where she was playing Darna, Sana’y Wala Nang Wakas with stars Dina Bonnevie and Cherie Gil and Nakagapos Na Puso where she starred alongside Lorna Tolentino.

In 1986 her show which was known for its title „The Sharon Cuneta Show“ aired on IBC and it was a huge success.

Sharon worked with National Artist For Film on the movie „Pasan Ko Ang Daigdig“. She did so alongside Lino Brocka.

Thus movie wasn’t really big in the box office but it gave her a FAMAS nomination in the category of „Best Actress“.

Sharon did two movies in 1988, „Buy One, Take One“ and also „Jack and Jill Sa Amerika “. Both of these movies got alright critics but they weren’t praised.

She then went on her US Concert Tour ’88. When she performed in Los Angeles she got the Plaque of Welcome and Appreciation from its mayor at that time, Tom Bradley.

In 1989 she had two movies, „Babangon Ako’t Dudurugin Kita“ and „3 Mukha Ng Pag-big“. She got two nominations in the category of „Best Actress“ from the Film Academy of the Philippines and also FAMAS.

In 1990 she made the movie „Kahit Konting Pagtingin“ with a megastar Fernardo Poe Jr. In 1991 she did „Maging Sino Ka Man“ with Robin Padilla and also „Pangako Sa ‘Yo“ in 1992 with Ramon ‘Bong’ Revilla Jr. In 1993 she did a movie with Rudy Fernandez called „Kung Kailangan Mo Ako“. All of these movies were huge box office hits.

From 1990 to 1992 she was in three movies with her ex-husband, Concepcion. Those movies were „Tayong Dalawa „, „Bakit Ikaw Pa Rin?“ and „Una Kang Naging Akin“. She got FAMAS, Film Academy of the Philippines, Gawad Urian and many more nominations for the category of „Best Actress“.

In 1992 she did a movie „Ngayon at Kailanman“ with Richard Gomez and two years later she did another movie with him, „Kapantay Ay Langit“.

In 1996 Sharon made the first movie outside Vivo Films for a long time. It was „Madrasta” and was made with Star Cinema. She got a lot of „Best Actress” awards for that film. She also got a Grandslam to win for that movie which was a big thing because only 3 actresses from the Philippines ever received that.

She again had a movie with Richard Gomez in 200 and it was titled „Minsan Minahal Kita „. It was a huge success in the box office.

Sharon was named „Best Actress“ at the Manila Film Festival back in 2002 for her role in „Magkapatid“.

From 2004 until 2007 she stopped making movies and decided that she should focus on her career in music and television.

She released an album titled „Isn’t It Romantic“ in 2006 and this album was Diamond certified.

That same year she went back on TV with „Ang Pagbabalik Ng Bituin”. After that, she returned to her talk show called „Sharon”.

In 2008 she made a movie „Caregiver“. It did really well in the box office.

In 2010 she released her magazine „Sharon at Home“.

Her talk show Sharon ended in October of 2010 and was replaced with „Star Power“ where she was a co-host alongside Erik Santos and Christian Bautista.

In 2011 she co-hosted „The Biggest Loser Pinoy Edition“.

The same year she left ABS-CBN and signed with TV5.

In 2012 she started another talk show „Sharon: Kasama Mo, Kapatid“.

In 2013 she co-hosted „The Mega and the Songwriter“ with Ogie Alcasid.

She has been married twice.

She and Gabby Concepcion met n 1981 while filming Dear Heart and started a relationship. They married in 1984 and had a child together but the two decided to separate and did so legally in 1987.

They separated because they were very different and because Concepcion was already married when Cuneta and him married.

In 1994 Sharon met Francis Pangilinan at the wedding of her brother. They started dating in 1994 and married two years later. Francis, Sharon and her child KC moved to Boston for Cuneta to finish her degree in business.

She did so at Harvard University. Francis and Sharon have two daughters together and also adopted a son.