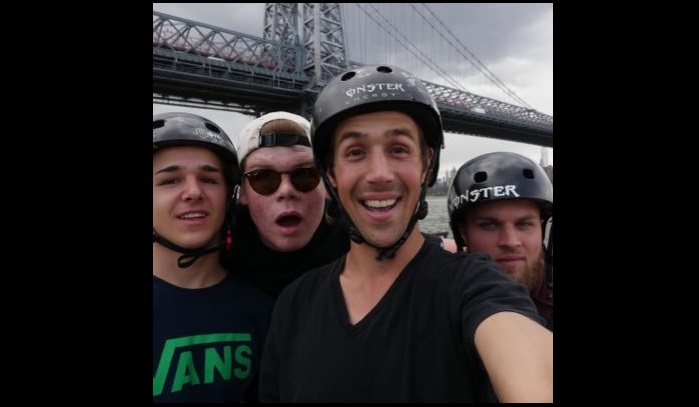 Scotty Cranmer is a known American BMX rider who holds a record in the number of X Games BMX Park Medals.

Scotty Cranmer was born on January 11, 1987 in Jackson Township in New Jersey in US.

His father’s name is Scott and it is evidently that Scotty was named after him. His mother is Donna.

He has a younger brother Matty who is often a guest at his channel. Today Matty wants to follow his steps and become a pro BMX rider.

He went to Jackson Memorial High School in his hometown Jackson Township.

He turned to this sport after watching some famous riders doing their stunts, for example Mat Hoffman.

First he started as an amateur in BMX but he rapidly grew to be one of the best in the country. After his amateur successes and winning a few tournaments, he turned pro in 2005.

He earned an attractive nickname ” The Bulldozer” and can bragg with nine medals on X Games from which three are gold, three are silver and three of course are bronze.

He has endorsement contracts with many companies but the most known sponsors are Hyper Bike, Vans, Monster Drink and Snafu.

He also advertises Pro-tec Helmets because riding bike can be very dangerous.

He opened a bike store under the name ” SC Action Sports Bycicle Shop” so it is clear that he thinks about his future too.

His YouTube channel called “Scotty Cranmer” is very popular amongst bike riders all over the world and was released in 2015. It features videos of him and his friends riding skateparks and bikes.

He has over one million subscribers on his channel.

His work is very dangerous because of all the stunts he do. He had a very serious back injury in the X Games that were held in 2016.

He also hurt his face, his C4 and C5 vertebrae and even had a cerebral hemorrhage while shooting a commercial for Monster Energy which is one of his sponsors. This was an extremely dangerous accident and it left him in the hospital for months.

“Road 2 Recovery Foundation” was helping him all through his hard recovery. They organized transport, doctors and money for his successful recovery.

He went through several surgeries of his spine , face and even his skull because lf the bleeding in the brain and after a few weeks he went through a really hard physical therapy.

His skull was broken on his forehead so it had to be surgically repaired. Doctors removed his forehead to lower the pressure on his brain and four months later he got his new prostethic forehead.

He told his fans that he felt a little bit Frankensteiny.

He has a wife called Lisa. She is his biggest support and she spends a lot of her time with him. During his time in hospital, she never left his side. Although they have no children, they are very close to eachother.

His brother Matty was a part of a Disney show called “Next X”.

His house has a skate ramp inside.

He has four cars and one of them is Audi A8.

He also has a paintball course in the basement.

His parents own an “Inline Skate Club” in Lakewood.

Scotty Cranmer is a popular BMX pro rider who won many tournaments and gold medals. He is currently recovering from a big bike accident where he has injured his head.