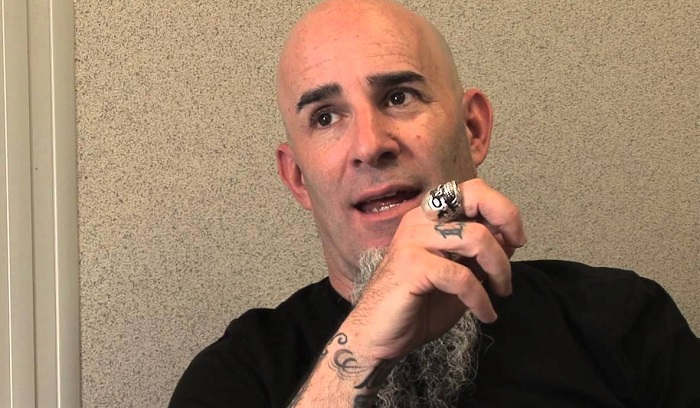 His years of experience and practice in music make Scott Ian, considered one of the greatest guitarists of his style, providing the world with a brilliant, unique and above all revolutionary sound.

This American composer and guitarist is recognized worldwide for being one of the founders of the trash metal band “Anthrax”, being also the composer of almost all the songs of the band.

Get ready to know in this article much more about the great Scott Ian, his biography, the equipment he uses and some of his songs.

Scott Rosenfeld Ian was born on December 31, 1963 in the city of New York, United States. During his youth he studied high school at Bayside School, where he made two great friends: Dan Lilker and Neil Torbin with whom in 1981 he would create the Anthrax band.

Scott grew up with his younger brother Jason, who also was in the band for a short period of time. One of the biggest influences and role models for Scott was the band Kiss. After watching one of their live performances, Scott fell in love with metal a decided to one day form his own rock band.

Since there are n more information about his early years, we are going to continue on talking about his career path and personal life.

Even though Scott was always a fan of music and he played since he was younger, his career officially began when he founded the group Anthrax.

The group was formed as something that wasn’t very common for those times, and that was one of the reasons the band was so well accepted by the audience.

As founder and member of Anthrax he helped, along with other groups of the moment, to give rise to the Thrash Metal genre in 1980.

Also, his style began the so-called new wave of American heavy metal, a new way of playing the guitar. With the band he has recorded at least 20 albums and has managed to sell millions of records over the years.

Among his most outstanding projects is the presentation in 2001 of a program of the American cable television channel “Vh1” called “Rock Show” in which he participated as an interviewer for artists and larger bands from around the world.

As for his style, Kiss, The Ramones, Iron Maiden and Black Sabbath are the bands that most influenced him, while in his way of playing the guitar he focuses on the heavy style of the heavy metal band Accept.

Scott Ian is famous for using Jackson brand guitars, brand with which he has his own line.

All the guitars he plays are equipped with Seymour Ducan pickups and are custom-made. He also has a special Jackson with only 4 strings, a guitar that he decided to create since according to him in most of his songs he only uses 3 strings to play them, so the rest are “over”.

As for his collection of amplifiers, his favorites are all of the Randall brand. His love for the amplifiers of the brand began one day that he had the opportunity to try one and from that moment he was fascinated by its quality and sound.

This led him to stop using Marshall Brand amplifiers, although he sometimes carries a Marshall JCM-800 and a Plexi.

Besides music, Scott also ventured on other projects. He hosted the show Rock show where he welcomed some of the greatest musicians of our time like Ozzy Osbourne, Tenacious D and many more.

In 2008, he became a part of the Ultimate Bet, which is the largest internet gaming site. He was one of their professional players.

In 2010, Scott joined the Damned Things, which is a metal super group. His latest project was in the 2015, when he released a debut album with the Motor Sister. He joined the band in 2014.

His net worth is estimated at around 6$ million. Most of the money comes from his time in the band but also from the other projects that he participated in.

Scott will definitely be remembered for the anthrax, even though he sailed away from the group several years ago. The unusual music style and peculiar group members, gave special vibe to the band that made the audiences love it.

Since he is already 48 years old, we can expect that his net worth is the highest as its going to get, unless he makes millions playing poker. Since he often showed talent playing poker, this theory doesn’t sound that difficult to believe in it.

So far, we will remember Scott as one of the members of Anthrax and as someone who made us feel better through his music and talent.

Whether he has more great songs in store for us in the following years, we will have to wait and see. Until then, we have plenty of songs to enjoy.

Scott Ian was born in New York City in 1973, in a family of Jewish origin. From a very young age he was linked to music, since he was a fan of many Heavy Metal and Hard Rock bands of the time.

He studied at a public school in the Bronx, where he met Danny Lilker, who would become a bandmate and his best friend.

In 1983, together with Danny Lilker, I created Anthrax, a thrash metal band that Dan Spitz and Charlie Benante would later join. In the year of 1984, after much effort, they released their first record work, which they called, Fistful of Metal, which did not have a great commercial success, but managed to create a mood boost to the band.

In 1987, the band published the album, Among the Living, an album that would make Anthrax a worldwide recognized band and Scott Ian one of the most recognized guitarists in the world of metal.

Together with Anthrax, Ian has released 10 albums and sold more than 50 million albums. Scott Ian has also played in three more bands, Stormtroopers of Death, Damnocracy and The Damned Things.

Scott was married for several years to his wife Marge Ginsburg. The couple ended up divorcing and Scott got married to Pearl Aday, who is actually the daughter of the famous singer Meat Loaf. The couple welcomed their first child in 2011, and named her Revel Young Ian.

Scott likes to cheer for his favorite team called the New York Yankees, and he also likes winter sports. Another love of his is playing poker. He was a part of the World Series of Poker where he earned 20$ thousand.

Scott has a special place in his heart for the Battlestar Galactica and has many posts on his social media accounts about this popular show. He even thought about appearing in the finale of the series. Scott played guitar in The Plan, a soundtrack made for the movie.

Doctor Who is another one of his loves, and he has watched all the episodes since its release. Even though Ian is a hard time rocker, he likes rap and hip hop music as well. He enjoys songs by Public Enemy and also Run-DMC.

He liked how Run-DMC had the same passion in his songs just like rock musicians, and this is what attracted him to the Run-DMC at first.

Scott tried his luck with business as well. So he owned a bar called Dead Mann’s Hand that was located in Las Vegas.

The success of Ian was the band Kiss, seen live in 1997 at Madison Square Garden. He was very vocal about the band’s love.

Scott Ian was born on December 31, 1963, in Queens, New York. Rhythm guitarist and founding member of the Anthrax heavy metal band, who with his signature goatee became the group’s logo.

His bandmate, Frank Bello, was playing Anthrax’s bass. He and Danny Lilker, one of Anthrax’s co-founders, chose the name of the group for the most severe illness they could find in their textbook on biology.

He appeared in one episode of the Gene Simmons Family Jewels and spoke about the band’s effect on his life. His other influences included British heavy metal bands like Black Sabbath, Iron Maiden, Motorhead, and Judas Priest, as well as NYC hardcore punk and metal music. He knew he could be a popular hard rock / heavy metal star from a very young age.

Scott Ian, as well as Megadeth, Slayer and Metallica, is a founding member of Anthrax.

He is also the band’s guitarist and also made a collaboration with Publ’s rap legends.