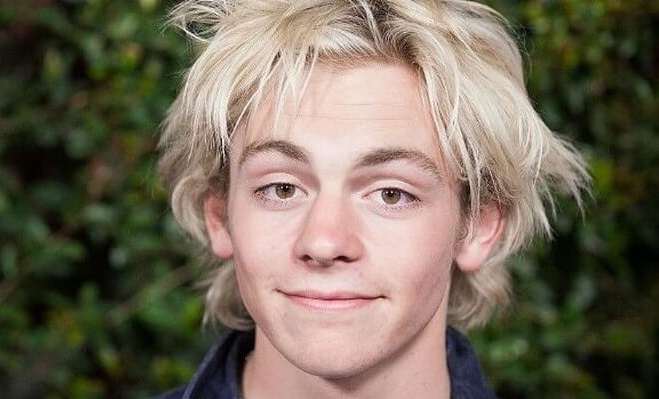 Ross Lynch is a young American singer and songwriter who is known as the leader of R5, a pop-rock group that used to be very popular back in the day.

Later in his career, he focused on being an actor in series like Austin & Ally and Teen Beach Movie. His serious roles happened by the end of the 2010s and his popular role as the serial killer Dahmer gave many people a positive look at his work.

He was born as Ross Shor Lynch on December 29, 1995, in the city called Littleton in the state of Colorado, in the United States. He said that he loves the USA and always wants to come back home where his parents reside.

He had spent his childhood alongside his four siblings with whom he is very close. They all had similar aspirations in life, which brought them together.

He has three brothers named Rocky, Ryland and Riker and a sister Rydel, who also became a musician together with Ross and Riker.

There was always a joke about how all of their parents named them so they have pretty much the same name, but they don’t comment this too much.

Ross was homeschooled and during that time he also showed a huge interest in music so his parents soon found him a piano and guitar teacher.

He said that he is interested in becoming a singer, but later he realized that he just wanted to be a part of the showbiz world.

He was twelve years old when his parents relocated to Los Angeles and he soon realized that this is a great step for him because he will have much better opportunities since in LA there are a lot of managers.

In 2009 Ross and his brother Riker and Rocky and sister, Rydel Lynch decided to form a pop-rock band.

Ross became the lead vocal and a guitarist while his brother Rocky was the lead guitarist of the band. Their sister Rydel was the keyboardist and Riker was on the bass guitar.

The only member of „R5“ (how they named the band) which wasn’t family member was Ellington Ratliff who was the band’s drummer. He was well-received, though.

The band has released its debut EP in the spring of 2010 and it was titled „Ready Set Rock“. It did pretty well because at the time bands with young male singers.

Their second EP named „Loud“ was released in February 2013 and was followed by their first album „Louder“ which came out in September the same year and entered the Billboard 200 charts. They were very happy about having their music so well received.

In 2015 the band has released their 2nd album which was titled „Sometime Last Night“ released through Hollywood record label.

Their collaboration ended in 2018 when only two members of the initial band, Ross and Ricky, stayed in a mutual project named „The Driver Era“. This was an interesting and dynamic era for all of them, and they weren’t sad about the fact that they are splitting up, because they knew that it was for a good cause.

Ross’s first appearances on television were in TV shows like „So You Think You Can Dance“ and in a sports TV series Called „Moises Rules!“.

In 2009 he made an appearance in Kidz Bop video. At the time, this was very popular and he received quite a lot of praise for this role.

In 2011 he gained the role of Austin Moon, in a series named „Austin & Ally“ which aired on Disney Channel. This was the most popular role he has in his early career and it made him quite popular amongst young people. The show lasted for four seasons, until January 2016.

He also appeared in two other series, Girls Meet World and Jessie. None of these were as big as the above-mentioned show.

In 2012, he made a big breakthrough with his new TV movie in which he had a lead role. The name of the series is „Teen Beach Movie“ and he had a role od Brady. It premiered in the summer of 2013 and his female partner in the movie was Maia Mitchell. The movie gained good reviews and brought attention to both leading actors. The sequel of the movie named „Teen Beach 2“ was premiered in 2015.

His other movie appearances were in 2014 in the movie named „Muppets Most Wanted“ and in 2016 comedy movie called „Status, Update“. This movie directed by Scott Speer was Ross’s first real movie debut in the role of Kyle Moore. This became the other part of his career when he was more grown-up and started to get more serious roles.

In 2016 he performed in a musical called „A Chorus Line“ where he starred as Mark Anthony.

In July 2016 he appeared in a movie named „My Friend Dahmer“, directed by March Meyers and released through Film Rise. This movie was a hit amongst many young people who are interested in true crime movies and series.

In 2012, Ross, who already learned to play drums and bass alongside piano started dancing for the Rage Boyz Crew, a dance group that became very popular. He had a lot of fun with them, but this wasn’t what he wanted to do in life.

In the spring of 2012, he had released his first single named „A Billion Hits“. It was a single from the soundtrack of the series he was featured in titled „Austin & Ally“. The single was released through iTunes and it peaked on No.1. of Billboard’s Kid Digital Songs Chart.

His second single was named „Heard It On the Radio“ and it entered the UK Singles 200 Chart. Ross had sung all the singles from the series. He did the same with the 2nd soundtrack of the series titled „Austin & Ally: Turn it Up“.

In the final soundtrack of the series which was named „Austin & Ally: Take It from the Top“, he sang five songs and the album was released in 2015.

In 2015, Ross was featured on songs written for his Teen Beach 2 movie which was so successful that it entered the Billboard Top 200 chart. He said that his solo career was successful, but it wasn’t anywhere near as fun as being with his brothers and sisters in a group.

In 2016 he was featured on a single „I Feel the Love“, an original song made by an American duo Tritonal. He said that this project was very interesting to him and that he enjoyed doing this.

In 2013 he had appeared as Jack Russel in the episode of „Ultimate Spider-Man“ TV series aired on Disney XD. He made a guest appearance on „Violetta“ in 2015.

From 2018 he has been a part of the cast of a horror supernatural series called „Chilling Adventures of Sabrina“. It was produced by Warner Bros and distributed by Netflix and aired on it too. The series is still running. The series gained great reviews and was also filmed with a Christmas Special the same year. He had received many awards for his work.

Because of his looks, he is often nicknamed Rossum, Rossy Baby, and even Jersey Shor. Many women like his looks and that’s also why he has so many followers on his social media as well.

His parent’s names are Mark and Stormie Lynch and they are very proud of him and all their kids and have always been a great support for him.

As for his love life, he has been in a lot of relationships, mostly with known personalities. The first relationship he was in was the one with an actress Mia Mitchell (from Australia) but they never confirmed it.

In 2012, he had a short fling with Laura Morano whom he met while filming „Austin & Ally“ but they didn’t get along very good. He was rumored to be in a relationship with Vanessa Morano too, which ended up being very awkward.

The same thing happened with Morga Larsson. It was presumed they were dating for two years, until 2014. He started dating a beautiful model Courtney Eaton in 2015, but their relationship ended by the winter of 2017.

He is of the Christian religion. He doesn’t share too much on it, though, since he is a pretty simple guy with simple motives.

In 2019 he started touring with his brother Rocky and the duo is promoting their new single „Feel You Know“. He and his brother are the only members of The Driver Era group.

Ross is a skilled surfer and snowboarder and likes everything connected to adrenaline. That is why he learned to pilot a plane and has the basic skills of a tattoo artist.

He is rumored to be dating Jaz Sinclair, one of his co-stars from Sabrina series.

A lot of his friends and family members were shocked when he decided to accept the role of a young serial killer Jeffrey Dahmer in a movie shot in 2017.

He said that he is glad that he has shown he can play serious roles but he also commented that the movie left a trace on him.

He started having sleep problems and imagined Dahmer in the corner of his room which was very scary for him.

He was connected to Bella Thorne in 2015, but not one of the two wanted to disclose this online or on the TV, so their relationship stayed very private and no one is sure whether they were friends, good friends or best friends.

Some even think that they were in a relationship.