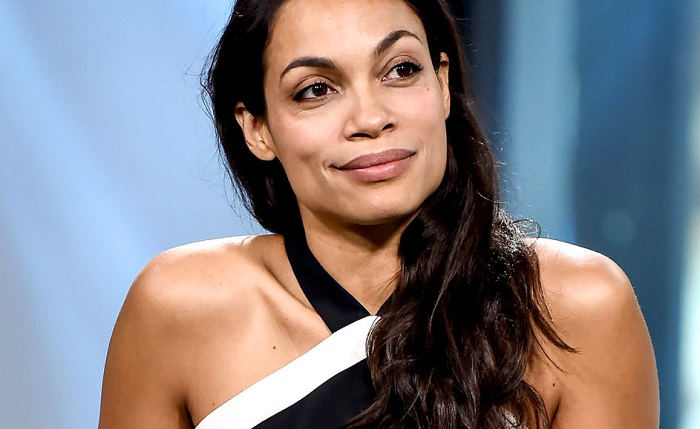 You may know Rosario Dawson as a very beautiful and popular actress from the United States of America, but many recognize her as a talented singer as well.

She was in many interesting movies over the years, getting some very notable roles as well.

As she became a popular TV person, she also started to give her voice to many cartoon characters for DC Comics, but Nickelodeon and Disney WB as well.

She was also in Rent, and for this role, she had been given an award by Satellite Awards.

Lately, she has been a part of many Netflix series which represented her to a wider audience.

However, her mother is not from America at all, her name is Isabel Celeste and she is of Puerto Rican and Cuban descent. Rosario was never ashamed of her roots and never thought less of herself.

Her mother was actually barely 16 when her daughter was born and the father never got married to her mother. His name is Patrick C. Harris.

Rosario was very young, only about 1-year-old, when her mother fell in love and Rosario gained a new dad.

Her mom married Greg Dawson, who was a construction worker. With him, she had Rosario’s younger brother whose name wascClay, who was born four years after Rosario.

Dawson often mentions her mother as a true hero, a role model and someone who needs to be respected. She understands how tough her position was when she decided to have Rosario at such a young age.

When her mother was 21, she had to go live with her family and her small children in a building that was abandoned.

They didn’t have the cash to pay for the expensive houses and they decided to make their own there.

Thankfully, Isabel’s husband was a construction worker and he did all of the plumbing, the electricity and the rest. He knew how to install the whole house and create a home for them.

Dawson says that she isn’t ashamed of where she came from. She is very real with herself and knows that this part of her mother’s life was very hard and tragic, and that’s why she believes that she actually owes her mother an apology.

Rosario realized that if she wanted to have something, she had to work very hard for it.

That is why she has big respect for manual workers because she knows how tough that work is.

Her introduction to the world of showbiz started when she was very small. She was on Sesame Street and had a lot of fun there, but she admits that she has no idea how her parents got the idea of putting her there.

She was only 15 when she was discovered by Larry Clark, the creator of Kids, the controversial movie from 1995.

He used to make a lot of movies about several tabu themes like bullying, which made him pretty memorable.

Harmony Korine also took interest in Rosario because she was the writer of Kids. They noticed her when she was out on the streets and realized that she could be the perfect person for a role they had.

This coming-of-age film has caused some controversy after it was released but it also earned $20 million dollars at the box office which was a huge success since it was made with a budget less than $2 million.

The film was also a career turning point for four leading actors which all debuted in it. Their names are  Leo Fitzpatrick, Justin Pierce, Chloë Sevigny, and Rosario Dawson.

Her first next working project was not in a movie but for the photoshoot for Harper’s Bazaar magazine.

After that, she starred in many independent movies and later she got to be in some of the biggest blockbusters.

In 1998, she was the voice in the movie „1999“ which offered a summary of the past decade for the upcoming new age.

It was an independent movie directed by Nick Davis and starred by Jennifer Garner.

At that time The Chemical Brothers were very popular and she was in one of their music videos, which made her pretty well known in that industry as well. It was the song Surrender that skyrocketed her „fame points“.

OutKast gave her a short intro/outro part in one of their songs after seeing the phenomenal job she did on the 1999 movie. They liked her performance and wanted to have her in their project.

Her first popular movie was “Josie and the Pussycats”, from the year of 2001. It was directed by Deborah Kaplan and Harry Elfont.

She said that sometimes, when she was auditioning for roles, people would give her roles that were related to her exotic looks, which she was first offended by, but got over it after seeing that she enjoys those roles since they are very intense.

In the 25th Hour, a movie from 2002, she was a drug dealer and had to be this really tough persona. This crime drama movie directed by Spike Lee was a huge hit and it received several nominations and awards like Golden Bear Award and Golden Globe Award.

In 2004, she was completely different from that and played the wife of Alexander The Great in the movie called Alexander.

This pure classic made her name very well known and she says that she owns a chunk of her fame to that masterpiece.

After that, she had a small pause from the movie world and went back to the theatre where she was in some of Shakespeare’s most famous pieces.

In Rent, one of her most famous movies, she was an exotic dancer and many directors found out about her astonishing beauty.

This was in 2005, and she was there because Rubin-vega was pregnant and she couldn’t act in the role.

After that, she did her big project called Sin City, which made men all around the world very interested in her.

This movie brought her huge experience and gained her more acting knowledge due to the fact that it was directed by extraordinary people like Robert Rodriguez and Frank Miller. The third director was Quentin Tarantino.

She was a prostitute who was very dominant in all of her relationships and because of that, she had to listen to creepy comments for a long time.

She was also in The Devil’s Rejects, playing in a pretty violent scene, which ended up not even being in the movie, but it could be seen if you bought the premium DVD.

In Clerks II, she was a character called Becky and she said that there were some very interesting parts that made her really want the role.

She decided to do something a bit different after that, and she was one of the writers of a comic book called Occult Crimes Taskforce. Many were pleased to see her at the comic convention in San Diego in the year 2007.

One of the most interesting projects she had done, according to her, was work with Quentin Tarantino in Death Proof. She said that this was a very honoring role.

In 2008, she met Will Smith again and starred with him in Seven Pounds, later in Eagle Eye, only to honor the second part of Men in Black.

The first two movies were a work of the famous Steven Spielberg and Rosario was very happy to work with such good producers.

In 2009, she was on a Saturday Night Live, but not as a guest. She was a host and said that she had quite a lot of fun and that she could see herself hosting another show in the future as well.

During the same year, she was in „The People Speak“, which was a documentary movie that musically adapted famous letters and diaries. This was all based on a famous work by Howard Zinn.

That same year, she got another opportunity to be a voice actor. She was Velvet Von Black in The Haunted World of El Superbeasto.

In 2010, she was in the Percy Jackson series called The Lightning Thief. She said that she has never really been in popular young adult movies, so she was pretty interested in those.

Her next big roles were in Unstoppable, Sin City: A Dame to Kill For, Jessica Jones, Krystal.

She had given a voice to game characters in NBA 2K20, Dishonored: Deat of the OUtsider, Lego Dimensions and Syndicate.

Rosario is a big fan of Star Trek and she has revealed that many times. One of the most common things she says is that she is a „true Trekkie“, whenever people on talk show ask her about her favorite movies and series.

She also told that to Conan O’Brien, to whom she also showed that she can speak a tiny bit of Klingon.

In 2014, she made a big step in her private life by adopting a small girl. She was only 12 and Rosario said that this is one of the most beautiful memories in her life.

In the spring of 2019, she admitted being in a relationship with Cory Booker, a pretty famous politician from the United States of America. He is also a senator, as well as a candidate for the presidential position. He used to be mayor of Newark, which makes him pretty skilled in business.

In 2004, Dawson had quite a lot of trouble on her hands for being in a protest against George Bush.

She was also one of the protesters who ended up in police when the Democracy Spring was happening. She is not ashamed of this at all and says that everyone needs to fight for their rights.

She claims that it is important to participate in politics so the government knows the people’s opinion.

She is a big philanthropist and has been involved with many charities. She first started to support charities that protect the environment.

One of them was called Global Cool. After that, she was involved in the life of groups like ONE Campaign, Operation USA, Oxfam, Voto Latino, Lesbians and Gays, and more.

She said that her uncle, called Frank Jump, was also in a campaign for the PFLAG organization, in whose life she was very interested in as well.

She was in Vagina Monologues, a non-profit movement that takes care of women violence.

She says that women need to be more open about sex and sex life. Rosario also calls her vagina „The General“.

In 2009, she got into a philanthropic program by TripAdvisor.com, with whom she got involved because they were working with The Nature Conservancy, Doctors Without Borders, Save The Children and more.

She was also one of the voices of Giverespect.org and did a voice message to help raise awareness about domestic violence that is happening behind closed doors.

She is one of the members of the Board of Directors of Scenarios USA and she is very determined on giving young people the proper start into their film making careers.

She wants to help educate them and give them the tools they need to make their first big movies.