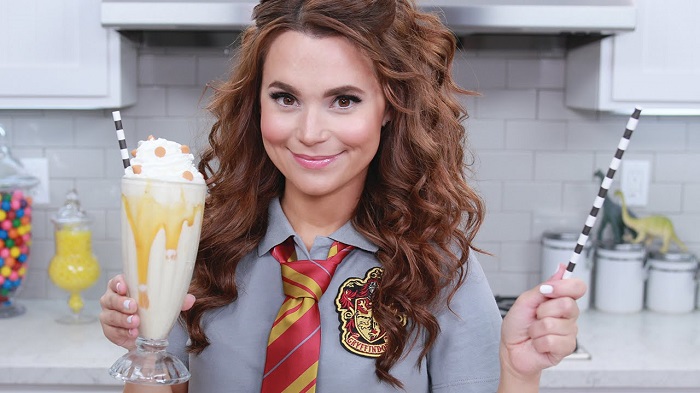 Rosanna Pansino is an American baker and YouTuber famous for her hit YouTube cooking show Nerdy Nummies that accumulated a fan base of 8.4 million subscribers and 1.98 billion views in six years of its existence.

She started as a beginner actress who did YouTube just to get comfortable on camera, but earned big audience through charm, originality and useful cooking tips. This is Rosanna’s success story.

Rosy was born on the 8th of June 1985 in Seattle, Washington. She graduated from Pacific Lutheran University in 2007 dreaming about many different career possibilities when she took a private class in acting and fell in love with the art.

Rosanna wanted to be an actress and her charm along with good looks made it possible. She first appeared in VH1’s reality series “Scream Queens” in 2008, competing for a role in one of the Saw films, and made it to the finals.

Rosanna Pansino started a YouTube career in 2011 without a clear intention in mind, but encouraged by her friends to try it out. One time she filmed a cooking episode about themed party treats and viewers asked for more similar videos. Rosanna responded by creating Nerdy Nummies series.

The series was an instant success giving Pansino’s channel 75 million views per month and eight million subscribers. Nerdy Nummies series has more than 100 cake, cupcake and cookie recipes each with a unique nerdy-themed design often resembling characters and from TV shows, movies, books and video games.

“Nerdy Nummies Cookbook” was released in November 2015 including selected recipes from the YouTube series, but mostly consisting of completely new recipes. The cookbook was a major success earning the title of New York Times best seller. Rosy is also preparing to release a line of baking supplies branded by her name.

From the first day on Rosanna uploads a new video every Tuesday continuing to show off new recipes.

This amazing multitalented girl is also a singer. Her first single named “Perfect Together” was released in February 2015 and has 16.7 million views.

Rosanna has a younger sister named Molly, also known on YouTube as Molly Lu, who is married. The family is very close and they help out with the making of the Nerdy Nummies show.

Pansino now lives in Los Angeles and is dating an actor and comedian Josh Sussman, known for the roles of Jacob Ben Israel in “Glee” and Hugh Normous in “Wizards of Waverly Place”. Rosanna was secretive about the relationships for a while. But then the couple started appearing together in red carpet movie premieres.

Rosanna Pansino earns an average of $2.5 million a year and drives a luxury car worth more than $50 thousand.

Her estimated net worth is over $9 million considering she earns a lot from online advertisements and is thought to be one of the highest paid YouTubers.

Rosanna Pansino is one of those YouTubers who are also huge on social networks. She is followed by 2.7 million people on Instagram.

Rosanna has German, Italian, Croatian and even Irish ancestry.

Pansino started working to earn money when she was 12 and sometimes had more than two jobs at a time. She worked a babysitter, a dog walker, a waitress, a barista; she was even an English teacher in China.

Rosy played Sandy in a high school version of the musical Grease.

As a student Rosanna spent a semester in China where she worked as an English teacher using her previously acquired basic Chinese language skills.

While she was still looking for her true calling, Pansino thought about becoming a nurse, or an FBI agent, or a television journalist.

Rosy suffers from dyslexia (a disorder that gives people trouble with reading) and it made her decide against purusing a journalistic career. She also was very shy and insecure about her height, but acting classes she took soon made it all better giving Rosanna the confidence she needed.

Pansino is certain her charm and good looks aren’t the only things that gave her acting career a good start. She says that her height played a role helping her get teenager’s parts and giving her a small advantage over other older actresses.

Rosanna Pansino was inspired to start cooking by her grandmother.

Rosanna is a huge Harry Potter fan and one of her recipes is called “Harry Potter Love Potion”. She also has a recipe for “Pokemon cake pops” and Lord of the rings teamed donuts.

Pansino’s production company numbers 10 people including her parents and her sister with husband. She even shoots in her own kitchen making Nerdy Nummies as personal as it can get.

She signed a contract with Kin Community, a top multi-channel network for women YouTubers.

Rosanna’s name is on both 2015 and 2016 Forbes’s list of the highest-paid YouTubers.

Rosanna Pansino is an American baker, YouTube personality and actress whose cooking show Nerdy Nummies has a fan base of 8.4 million subscribers and 1.98 billion views earning her a net worth of $9 million.

She started YouTube just to get comfortable on camera, but ended up with a big audience hungry for more of Rosy’s charm, originality and useful cooking tips.

Nerdy Nummies recipes have a unique nerdy-themed design often resembling famous characters  from TV or movies. Rosanna made sweets to tribute Harry Potter, Pokemons, Lord of the rings, Pirates of the Caribbean…

She released “Nerdy Nummies Cookbook” that is a New York Times best seller.

Pansino won a 2013 Shorty Award in food category and was twice nominated for Steamy Awards.

Her name is on the Forbes’s list of the highest-paid YouTubers. Despite all the fame she keeps it personal and simple – shoots in her own kitchen involving her closest family in the creative process.

Dedication, charm, creativity and a bit of good fortune is what made Rosanna Pansino big in the show business and is what promises to keep her shining bright in the future.