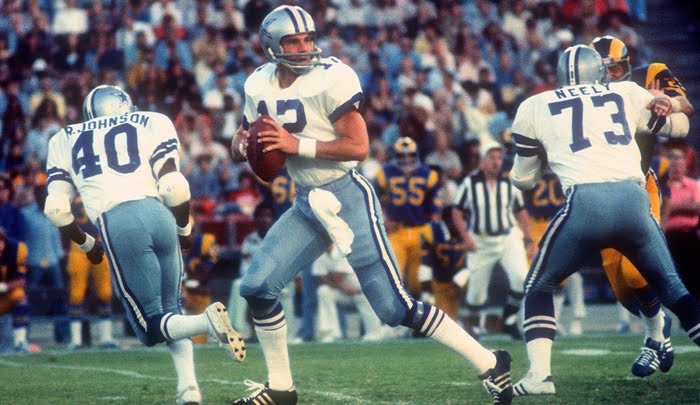 There are some celebrities that are famous, successful and rich; there are those who make a serious impact in the field they work, but they are those individuals who can make something extra special in their lives.

Along the way, these people become not wealthy but millionaires, many times over – they do by smart investments.

One of those people is Roger Staubach.

He is one of the most famous NFL players ever – he is a former American NFL player who joined the Dallas Cowboys in 1969.

Roger played for the club for eleven seasons and led his team to the Super Bowl five times – his team has reached two victories, in Super Bowl VI and Super Bowl XII.

One thing must be clear from the beginning of this story – with his Net Worth of 600 million dollars, and he is the richest NFL player ever.

Roger Thomas Staubach is born on February 5, 1942, in Cincinnati, Ohio.

Some of his nicknames are “Roger the Dodger”, “Captain Comeback” and “Captain America.”

His mother and father were Elizabeth (née Smyth) and Robert Staubach, and he comes from German descent.  Roger Staubach lived with his parents and his grandmother in a loving atmosphere in the suburb of Silverton, Ohio.

Roger grew up in Silverton, a northeastern suburb of Cincinnati as an only child.

When he was young, he was a Boy Scout and attended St. John the Evangelist Catholic School, he was great in all sports, but he also took piano lessons (his mother desire).

In one candid interview, he said that his parents were the best and that he just wanted to make them proud, and by looking at his life, he successfully passed this test.

He graduated from the Catholic high school Purcell High School in Cincinnati in 1960.

His parents were devoted Catholics, and they took prayers seriously – Roger started that faith makes him humble and grounded.

Roger Staubach was even chosen President of his Class in his Purcell High School.

Roger took a post-grad year at New Mexico Military Institute, and he said that this was the most important time for him cause he developed as the person, a sportsman etc.

Roger went to the U.S. Naval Academy where he won the 1963 Heisman Trophy. When he graduated, he served in the U.S. Navy, including his time in Vietnam.

In 1969, Staubach entered the Dallas Cowboys and stayed with his team for 11 seasons.

His team went to the Super Bowl five times, and four out of five times he was the starting quarterback.

He led his team to the victory two times and was named the best player.

Rogers has become the first of four players to win both the Heisman Trophy and Super Bowl MVP. Other players that succeeded in this are Jim Plunkett, Marcus Allen and Desmond Howard.

Roger was called to the Pro Bowl 6 times during his 11-year amazing NFL career.

Now he is working actively as an executive chairman of Jones Lang LaSalle.

He was so talented that the Cowboys choose him as the tenth-round “future” selection in 1964, and the NFL allowed the Cowboys to draft him earlier, one year prior to his college eligibility was over.

The problem was that he had a four-year military commitment, so Roger started to play professionally in 1969 as a 27-year-old rookie.

With a future selection, Roger was also drafted by the Kansas City Chiefs in the 16th round of the 1964 American Football League Draft.

In 1968, Roger was still in the Navy, but he has gone to the Cowboys rookie camp, using his military leave.

Next year, he left his naval work just in time to join the Cowboys training camp.

In 1970, His team won the first NFC title with Craig Morton who was a starting quarterback -the team has lost to the Baltimore Colts in Super Bowl V.

In 1971, Staubach took the role of quarterback.

Roger had the full-time quarterbacking duties in a week eight victory over the St. Louis Cardinals and led his team to ten consecutive victories. They included Super Bowl victory, 24–3 over the Miami Dolphins in Super Bowl VI in January 1972.

After this success, Roger Staubach was named the game’s MVP.  He achieved 12 out of 19 passes for 119 yards and two touchdowns and racing for 18 yards.

In 1972, because of his injury, separated shoulder, Staubach missed most of the season.

Some of his amazing achievements are these: He led his team to the second Super Bowl win in the 1977 season.

Roger threw for 183 yards and a touchdown in Dallas’ 27–10 victory in Super Bowl XII over the Denver Broncos.

Roger eventually retired at the conclusion of the season to protect his health, refusing the Cowboys’ offer for two more seasons.

This came as a reasonable decision – he suffered from 20 concussions in his career.

He made this decision after one concussion in 1979 when the doctor told him that he is ok now but that the next concussion will be fatal.

In the end, as far as his football career goes, Staubach completed his 11 NFL seasons with some outstanding results – 1,685 completions for 22,700 yards and 153 touchdowns, with 109 interceptions.

Roger started his investment real estate business, in partnership with Robert Holloway Jr., in the off-season (1970 until 1977) for the successful “Henry S. Miller Company”.

Roger described Miller as a classy, smart and fair man who gave him the first shot in the business world.

He said in one interview that he started working in this business because he did not want to retire and just do nothing or play golf.

He said that in the time when he retired, the NFL was not paying as much as today, so he had to do something since he was married and had three kids.

He said that he could not play anymore and that he had to start working, so he reached out to Henry Miller Jr.

His company developed amazingly – first, it had several office buildings, and soon after Roger bought out Holloway and changed the company’s accent from commercial expansion to expressing corporate clients seeking to lease or by location.

The Staubach company has worked with significant businesses, including McDonald’s Corporation, Hospital Corporation of America, AT&T, and K Mart Corporation.

Roger had worked as a chairman and CEO until June 20, 2007, when he declared he would retire as CEO of the multibillion-dollar real estate company he started 30 years earlier.

At the end of December, Staubach wrote the introduction for a book called “The Power in a Link” – authored by the United States Military Academy graduate, David Gowel.

Roger Staubach is a married to Marianne from 1965.

In the 70s and 80s, he was a spokesperson for the men’s clothes retailer Anderson Little, and he participated in advertisements.

Later, he did television commercials for Rolaids as well.

In 1980, Roger worked, for a short period of time, as the commentator for CBS Sports’ NFL telecasts.

Roger Staubach was honored with the “Lombardi Award of Excellence” from the Vince Lombardi Cancer Foundation – it is the prize given to the individuals who represent the “spirit” of the coach.

He participated in 2007 in fundraising for the presidential campaign of Senator John McCain.

He is a conservative Republican who has seen by some as the potential nominee for political office, and on one occasion he was asked to become a candidate for U.S. Senator.

Right now, he is known the best as a finance mogul, Roger Staubach left the mark in sports, and for a long time, he is making records in some other places.

Staubach is currently the managing director of the investment management company called “Jones Long LaSalle”, and he is worth a whopping $600 million.

The thing that we must speak of now is the fact that in the time when Roger played in NFL, or in the times when he started his career, the NFL was not a big league with the millions of dollars.

But here we come to the most important segment of his life – he did not wait to opportunities come to him, and he did not allow himself to wait for them to come his way – Roger started working on investments besides his football career.

He worked as a real estate broker during the offseason in the ’70s and seven years later he founded, the now-famous “Staubach Company”.

He made his business even more successful because he worked hard and found the best clients, and he soon realised that he has to go overseas, so he partnered with the Chicago-based real estate firm called “Jones Long LaSalle”.

Staubach and his kid’s trust fund grossed more than $100 million since it was sold in the year 2013.

This sale granted an initial payment of $9.27 per Staubach share with extra payments due during the ensuing 5 years for a sum of roughly $29/share.

Rogers is the co-owner of “Hall of Fame Racing”, a NASCAR Cup Series team.