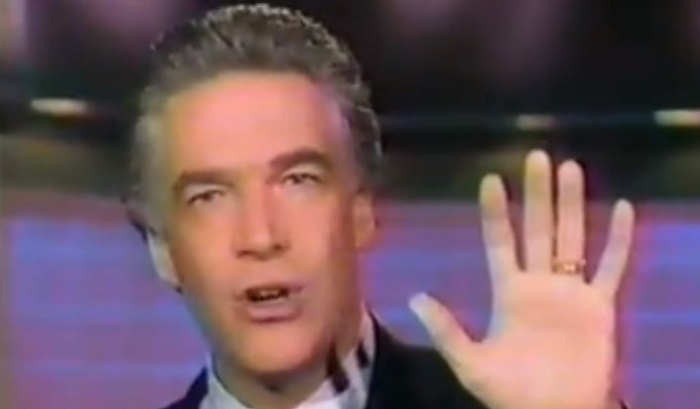 Robert Tilton is an American TV evangelist and pastor known in America for his religious TV program “Success-N-Life” which brings profit of almost $90 million dollars every year.

In 1969 he converted to evangelical Christianity and in 1974 he began his ministry. He took his family on the road to preach gospel. They travelled all through Texas and Oklahoma, preaching to small congregations. He finally settled in Dallas where he built a church called “Word of Faith Family Church”.

It was in 1976, when he was already preaching for 2 years. He was very ambitious about his work so he even started a local TV Program called “Daystar” with Dave Mitchell as his announcer.

Tilton was under a big influence of infocomercials made by Dave Del Dotto, who promised people better lives through his “get rich” books.

In 1981 he returned from Hawaii and loaned money from a Dallas banker so he could turn Daystar into a “religious infomercial” named “Success-N-Life”.

His ministry promised that God will reward all the viewers who buy “vows”. He has been critised for this since this was against every Christian belief, yet he still claimed that God was okay with it.

The TV was a great success and the church made to 8000 members.

He is an author of self-help books such as: “The Power to Create Wealth” and “How to Pay Your Bills Supernaturally”.

In 1991 an American journalist Diane Sawyer, in collaboration with ABC, conducted on investigation based on their learnings that they just threw all prayer requests and kept the money. They found discarded prayer requests and printouts but Tilton denied all the allegations.

He made a fortune and bought numerous estates. He was sued for fraud and one of the plaintiff won $1,5 million when she found out that he hasn’t built the crisis Center she donated her money for.

He and his wife Marte opened a private Christian School called Lexington Academy. The school had to close in 1998 because of debts gained from lawsuits of everyone. Tilton closed his FF Church in 1996 and came to only 300 members. He returned to TV in 1997.

In 2005 he started a new church in Florida: “Christ the good Shepher Worldwide Church”. He also opened one church in Las Vegas.

He married his wife Martha Phillips in 1968.

He went to Hawaii for forty days; he claimed it was his forty days in the wilderness, just like Jesus had his in the desert.

However, people didn’t like this statement and claimed he is being provocative.

Robert Tilton is an American preacher and TV evalgelist who was later prosecuted for cheating people who donated to his church.