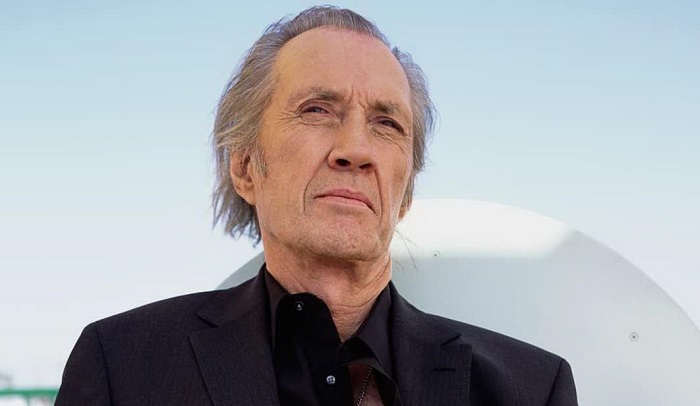 Robert Carradine is a known American actor who started being noticed after he gained his first role in a popular TV western series named “Bonanza”.

He became known to a younger audience after his role in the series of comedy films called “Revenge of the Nerds”.

He was born as Robert Reed Carradine on March 24, 1954, in the most known neighborhood of Los Angeles called Hollywood.

Los Angeles is one of the most popular cities in the United States due to the fact that it is a center of the American movie industry.

He was born into a family of actors. His mother’s name is Sonja Sorel and she was both an actress and an artist. His dad was a popular actor named John Carradine.

The whole Carradine family was known for great acting. His brothers Keith and Christopher also became actors and even has two half-brothers David and Michael succeed in the same task.

He was only 2 years old when his parents got divorced in a very ugly manner. Their marriage ended in a battle over children in which his father John Carradine won.

He gained custody over all of his children: Robert, Keith, and Christopher.

Because of this custody battle, the brothers had to spend 90 days in a home for abused kids which was kind of traumatic for all the boys.

Robert grew up in a family consisting of his father and Doris Grimshaw (his third wife).

Doris Grimshaw was his stepmother but he didn’t know that until he was 14 years old and found out about his true mom Sonia Sorel. Until then he thought Doris was his real mother.

After he entered high school he started living with his half brother David in California. It was in that period that he started to be interested in music and in race cars.

He joined his brother’s quartet and they performed in clubs all over LA and San Francisco.

In 1972, Robert Carradine gained his first movie role in a western starring John Wayne. He was 18 years old then and was very amazed by the fact that he acts alongside the famous John Wayne.

After that, he appeared in several TV series. He liked to work with his brother David who also got into acting.

The two of them had roles in Martin Scorsese movie titled “Mean Streets”. Other than this he was hired for several independent projects such as musical “A Country Mile”.

He was also involved in his brother David’s project named “American” which was released 8 years later.

In 1976 he gained a role in a comedy movie in which his brother David had the main role. It was named “Cannonball” and it earned twice as much as it cost.

In 1977 he starred in the movie named “Orca: The Killer Whale,” which was a horror movie based on the novel written by Arthur Herzog.

In 1978 he starred alongside John Voight and Jane Fonda in a Vietnam War drama movie called “Coming Home” for which he gained very good critics.

The brothers were very connected so the three of them starred together in a western named “The Long Riders”. It was directed by Walter Hill.

He starred and narrated in “The Big Red One” movie with Lee Marvin and Mark Hamill.

In 1983 he starred in “Wavelength”, a movie in which his own music was used.

It was the same year when he was chosen to star in a music video made for “The Motels”.

But his biggest and most successful role came in 1984 when he got a role in a comedy movie “Revenge of the Nerds”.

His role of Lewis Skolnick became his greatest achievement. This movie continued in sequels and Carradine starred in all of them. He even became the executive producers of both sequels.

He gained roles in “Max Keeble’s Big Move” and in “Mom’s Git a Date with a Vampire”.

Robert is also remembered for his TV acting. His debut role was in a TV series named Bonanza, in 1971.

His brother David starred in a series titled “Kung Fu” and Robert also appeared in it. In one of these episodes, even their father John acted alongside his two sons.

In 1979 he had a role in a TV movie called “Survival of Dana” which was made for CBS Network. He starred alongside Melissa Sue Anderson.

In 1984 he played a role for the man of the same name in a TV series “The Sun Also Rises”.

In 1987 he starred in a mini-series made by HBO “Conspiracy: The Trial of Chicago 8”. He starred alongside Elliot Gold and Peter Boyle.

He appeared in one episode of a popular crime TV series “Law & Order” in 2005.

Two years later he gained a role in a TV series “Jane Doe” where he starred alongside Lea Thompson who also directed a few episodes.

From 2001 until 2004 he starred in a TV sitcom named “Lizzie McGuire” which was aired on Disney Channel. Hillary Duff was the lead role of the series.

Robert also appeared in one episode of a popular TV series “ER” where he acted with his old friend Anthony Edwards with whom he starred in the “Revenge of the Nerds”.

The reality series was really a nerd competition in which they could win $100,000.

In 2018 he acted in “Solitary Confinement”, a horror-thriller movie directed by John E. Seymore which is based on a story about people put in solitary confinement in a reality show aired online. The contestants are fighting for one million dollar prize.

In 2019 he was in “Bill Tilghman and the Outlaws”, a western movie directed by Wayne Shipley in which he had the leading role.

As for his personal life he was very close to his half- brother David Carradine who died in 2009. Since then Robert is fighting with depression.

David Carradine was the most known actor from the Carradine family and has died in a weird way which caused David even more trauma. He hanged himself by a cord in a hotel room in Bangkok.

Robert was very upset because of it since he was very close to his brother.

He got married to his wife Edie Mani in 1990 and they have two children together.

Their marriage started to fall apart in 2015 after a car accident in which both of them got injured.

It seems that Robert drove the car and crashed it into a truck in purpose trying to kill them both. He was fighting depression for years and his wife claimed that he later admitted so.

Edith filed divorce just a while after this happened but they fought for a long three years before they reached the settlement.

His wife didn’t work so she had no money of her own and totally depended on his income.

Rober will pay her $2000 of spousal support every month and he left her one car and their property in Switzerland.

Robert has two daughters: ever and Marika and a son named Ian.

His daughter Ever Dawn is also an actress and stars mostly in TV. The other daughter Marika is not in the acting niche. She is an athlete type and is giving ski instructions. She also likes to draw and she founded @thinkingink.

His son Ian Alexander was born in 1992 and is also not involved in acting. He is a photographer and lives in Lisbon in Portugal.