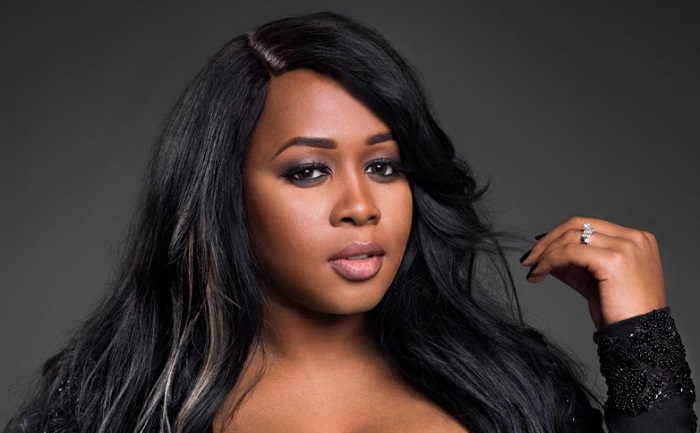 Remy Ma is an extremely popular female rapper from the United States, who became known as a member of a hip hop collective named the Terror Squad.

She is also a winner of a BET Award for Best Female Hip-Hop Artist and she had managed to receive this award twice which is a big accomplishment for a female rapper.

She is sometimes also called The BX Savior or Shesus Khryst, although she is widely known mostly as Remy Ma. All of these names she got through her fans. They love her and support her during all stages of her career.

She was born as Reminisce Smith on May 30, 1980, in a Bronx borough named Castle Hill, in New York, in the United States.

Reminisce Smith spent her childhood in the Bronx and had a very tough childhood. Her parents had drug issues and she had to parent her younger sisters most of her childhood and teenage years.

She was surrounded by poverty and violence and was always hoping for a way out of that situation. She liked the Bronx but she didn’t like her everyday struggles, especially because she had no support from her parents. One thing that kept her moving forward was the thought that she will escape the world she was living in back then and create a better one for her future.

In order to find her way out of the negative environment and difficult family issues, she started writing poetry and rhymes. It was her way to run away from a harsh reality. She said that it was very relaxing and that she found it a great way to meditate. It helped her get rid of the stress and the anxiety she was holding onto because of her lifestyle.

Reminisce was very creative in music but also in her style and appearance so she soon became interesting to the public. Many people made rumors about her because they thought she looked a certain way. The most popular one was that she was a lesbian, but Remi didn’t actually act too interested in these.

She was so good at it (making music) that she gained a good reputation which eventually leads her to meet MC Big Pun who heard her freestyle and immediatečy offered her long-term collaboration and his mentorship.

Her first appearance ever was on his album titled „Yeeeah Baby“ which was his second album. She rapped as Remy Martin on two of his songs: „Ms. Martin“ and „You Was Wrong“.

A lot of people wondered who was the new girl on the album and where did Big Pun found her and made his discovery. This was a crucial moment for her career as well.

Unfortunately, Big Pun died and she was left on her own until Fat Joe signed her to his label and she became a member of a hip-hop collective named Terror Squad.

Big Pun died in 2000 because of heart problems which occurred because of his obesity. He weighed over 300 kgs at the time of his death. This was a very tough time for Remi since she connected with him and therefore she decided to take a little break when he died.

Remy Ma soon became a star with „Lean Back“ as a hit single which even brought her a Grammy nomination. This was a breakthrough thing for her.

She has released her debut studio album under the title „There’s Something About Remy: Based on a True Story“ in 2006 by SRC, Universal Records and Terror Squad Ent.

She had 3 hit singles from the album: „Whateva”, „Conceited” and „Feels So Good“. All of these were very well received by the public and she was getting new followers as she started to be really serious about social media as well.

In July 2007, Remy Ma was brought into the police station due to the shooting in which Makeda Barnes-Joseph was shot and left wounded in the car, without anyone helping him to reach the hospital.

It seems that Makeda owed a certain amount of money to Remy Ma and that she shot him because of it. She was accused of murder, assault and illegal weapon carrying. This was a really controversial time of her life and many people decided not to support her anymore since they didn’t want to be associated with her work.

One year later she was convicted for assault and the judge was especially strict to her because she left a wounded man bleeding in the car and left the scene without trying to help him reach some medical help.

Barnes-Joseph filed a lawsuit against her for an extremely high amount of money while she was serving her sentence in Bedford Correctional Facility in the period of 8 years. This was in the media a lot during the time the controversy was popular and people started to think that this will be the end to Remi’s career. Little did they know that they were very wrong.

In 2008 she got married to Papoose (real name Shamele Mackie) which was going to happen while being incarcerated. She came out of prison in 2014 and they got married after that since they didn’t succeed it in prison.

After her release, she joined a VH1 reality TV show „Love & Hip Hop: New York” and continued being one of the main cast members in 2016 and 2017. This was a great experience for her because she always liked to be on TV and she also tried to be an actor but didn’t quite succeed in it.

She is very popular as a reality TV star, not only for her attractive appearance and great looking style but also with her passionate character and her strong views and stubbornness.

In 2016, she released a joint album with her old partner Fat Joe with whom she collaborated in her early years.  It was titled „Plata O Plomo“. It is Spanish for „money or bullets“ and it showed she never lost her music skills and touch while being incarcerated.

The album was a big success and it’s lead single titled „All the Way Up“ was extremely well received reaching platinum and selling in a few hundred thousand copies all over the planet.

It was also nominated for two Grammy awards but unfortunately, she didn’t win any of them. This was a pretty sad moment in her life.

In 2011, while she was still in prison, she was featured as one of the main characters in a documentary movie: „Black Lifestyle in Japan“.

It seems that she is one of the most listened hip-hop female artists in Japan, mostly loved by younger women who also praise her „Stylish“ looks and appearance. Many people enjoy the way she is and the way she communicated with others. She is very straight forward as well.

B-Style is an expression used connected to young Japanese people who love American hip-hop culture very much and don’t hesitate in anything in order to look like African American as they can.

The album „Plata o Plomo“ was a success from the point of music critics but wasn’t sold as much as her latest hit.

After finishing this collaboration, she started working on her album „7 Winters and 6 Summers” which was finally released in 2017.

The album was featured by Lil Kim who is also a prominent female rapper from America. This was a major cross over that many people enjoyed and they called them the best women in hip hop.

In January 2018 she released a single named „Melanin Magic“ featured by Chris Brown. Their collab turned out great and was very well received.

She also released a music video for „Company“, featuring A Boogie.

In the summer of 2018, she released a single named „New Thang” made in collaboration with French Montana. This was a huge success and many people were happy that she was back.

„State of the Culture“ is a talk show which airs on Revolution and is hosted by Remy Ma and Joe Budden.

She was charged for an assault after she assaulted Britney Taylor, one of the cast members of „Love & Hip Hop: New York“ during the show.

In 2004, she started beef with Foxy Brown, a female rapper from Brooklyn. The two of them dissed each other and spoke badly about each other’s work.

The two of them had a close encounter at an after-party when Foxy bumped into Remy on purpose getting her own hair caught in Remy’s bracelet and Remy pulled the hand and the hair went out.

In 2005 it was rumored that Remy punched Foxy in the offices of Def Jam Record label. Brown also dissed Remy on her track „We Hustlaz“.

In 2006, Remy released „Most Anticipated“ where she spoke about Brown’s hearing problem in a very bad and offensive manner.

In 2017, Foxy Brown released her new diss track called „Breaks Over“ and it was aimed at Remy.

In 2007 she started a feud with Nicki Minaj after she discovered that „Dirty Money“ was aimed at herself.

They continued their feud through songs. Remy Ma made „Money Showers“ with Fat Joe while Nicki did „Make Love“ with Gucci Mane.

In 2017, after she climbed up to top again, she released a single „Shether“ which aimed directly to Nicky and spoke about her personal life and music work.

In 2017. at „The Wendy Williams Show“, she made an accusation towards Nicki stating that she wanted to keep her away from major events and awards.

After performing at Summer Jam in 2017 she performed „Shether“ with Nicki Minaj photos on the screen behind her.

In 2018 she appeared in an episode of Queen of the South, staring as Vee. She loves performing in front of the camera and the camera loves her too.

She has released several DVD’s. In 2006 it was „Remy Ma: From the Grind to the Glamour“ and a year after it was „Shesus Knight”.

In 2016 she won two Soul Train Music Awards for Best Collaboration and a Rhythm & Bars Award.

As for her personal life, she got married to Papoose in 2016 although they wanted to do it in 2008, while she was still in prison. The wedding didn’t take place in prison because her future husband was caught in smuggling a key to her in prison.

He was banned from seeing her and the wedding was called off. This was a pretty controversial time in her life and she said that the fact it was all in media made it much more tough for her. That’s why other women felt empathy.

Remy Ma has two children. The first was from a relationship before Papoose and she never revealed the identity of the father and the other one was born in 2018 and that is their first child they have together.

Papoose has three kids from his earlier relationship so she is also a step mum to three of his children. She thinks of them as her own kids.

Remy Ma is very fashionable and a lot of women love her style. She launched her clothing line in 2018. A part of her earnings is going to an organization which helps women who were incarcerated and had troubles integration to the society after the release from prison.

Remy Ma spent six years in jail and during that time she started studying for her degree. She succeeded in getting a degree in sociology. She also wrote a study about Situational Homosexuality while getting this degree.

She has two sisters, Remeesha and Kristin Devereaux. She has a son Jason from a previous relationship. She tries to spend as much time as she can with everyone but it simply is not possible all of the time.

She receives a lot of money from her endorsement collaborations with Gucci, Moschino and I Wear Glam. This was a pretty cool deal and she was very happy with the work.