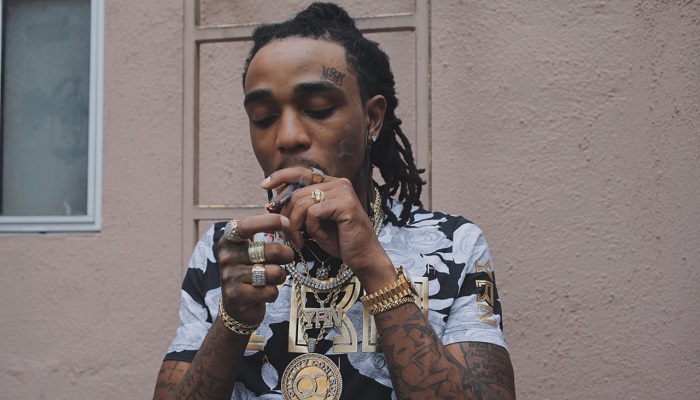 Quavo is an American rapper, songwriter, and musician who co-founded the popular rap group called Migos with two of his cousins. Migos are recognizable for their first viral single “Versace” and more recently a song called “Bad and Boujee” that rule the hip-hop charts.

And Quavo was recognized by Complex Magazine as the most influential rapper of 2014. He certainly must be one of the richest new names in the business. This article digs into every dime and turns every stone in his success story.

Quavous Keyate Marshall was born on the 2nd of April 1991 in Atlanta, Georgia where he was raised together with his cousin Kiari Cephus (stage name Offset) and nephew Krishnik Ball (stage name Takeoff).

He attended Berkmar High School Patriots in Lilburn where he played for the school football team as a quarterback. As the cousins reached seventh grade, they found a common new interest in hip-hop music and began making their own sounds which they would then randomly promote in clubs by paying for a DJ’s drink if he would play one of their songs.

To pursue a career in hip-hop Quavo dropped out of high school during his senior year.

The rap group Migos was officially formed in 2009 and had released two mixtapes before their surprising breakthrough came in 2013 with the song “Versace”. The song made it to US Billboard Hot 100 charts after going viral without any promotion. The hit was so big that Drake remixed it and added it to his own album.

The incident that happened in April 2015 left one of the members, Offset, imprisoned and had postponed their planned tour.

The album “Young Rich Nation” that featured collaborations with guest rappers such as Young Thug and Chris Brown finally came out in July 2015. Its’ lead single “One Time” that announced the album on radio stations received great reviews.

Since then Migos published another album and two more mixtapes, one of which was a collaboration.

The group was nominated for several awards during the years and managed to keep their spot close to the top even though they have not landed a win yet. Migos was nominated for the ‘BET Hip Hop Awards’ thrice in 2014 – for “Rookie of the Year”, “Best Club Banger” and “Best Mixtape”. In 2015 the trio was nominated for “Best Group” at the “BET Awards”.

Recently, Quavo made a debut as a solo recording artist with his own first studio album ”ATL” that came out in June 2017.

Quavo is rumored to be in a relationship with actress Karrueche Tran since January 2017 but none of the two has neither confirmed nor denied the romantic involvement. Media have closely followed the story that has been full of non-stop controversy from the beginning. They have been rumored to be on and off again several times.

The major obstacle in the relationship turned out to be Tran’s ex Chris Brown, who did not approve of the relationship. Quavo and Brown were friends but parted after Quavo took a romantic interest in Tran. The two rappers exchanged a few bad words in an incident following BET Awards ceremony in June.

Distinctive Features: Numerous tattoos including an interesting face tattoo of a cross and crown on his right temple.

Quavo’s net worth is estimated to be more than $4 million and rising. It suffices to say the man owns a Lamborghini.

He received twelve months of sentence after pleading not guilty, but the sentence was suspended after the rapper paid a fine.

Quavo always carries a leather backpack with him that contains a hefty amount of cash, two phones, and a spare T-shirt.

Quavo is the uncle of the third and youngest member of Migos, Kirshnik Ball, AKA Takeoff. Quavo is just three years Takeoff’s senior.

One of the biggest hits Migos made was a single called “Fight Night” from 2013 that was listed amongst 25 Best Songs of the Year by XXL’s choice. From the looks of it, their new song “T-shirt” is making the same list for the year 2017 since it made the preliminary list published in July.

Quavo was caught shoplifting at Macy’s when he was 17. He tried to steal some polo socks as a sign of teenage rebellion. In an interview, Quavo confessed that he felt pretty embarrassed when he got caught.

Quavo is an American rapper, songwriter, and musician who co-founded the popular rap group called Migos with two of his cousins, but recently tried a solo career.

Migos became famous for their single “Versace” in 2013 and made several mixtapes and two albums so far.

Quavo is now one of the most influential contemporary rappers and certainly one of the richest with a staggering net worth of $4 million and rising.

Quavo is in a relationship with actress Karrueche Tran, the former girlfriend of Chris Brown, who did not approve of her relationship with the Migos rapper. Former good friends Quavo and Brown got into an incident over Tran after BET Awards ceremony in June 2017.

Quavo has more than six million followers on his official social networks and is considered the most popular of Migos members. People see him as the group leader and the most talented and charismatic of the brothers. It’s no wonder he has set sail to go solo since the media have been predicting him success even in that scenario.