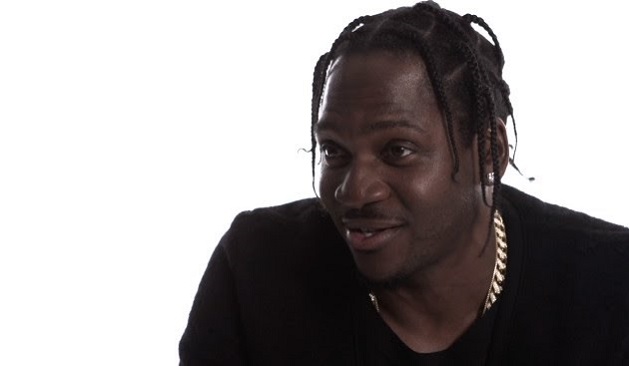 Pusha – T is a very known American rapper and record label owner who gained recognition as a part of a hip hop duo titled „Clipse“.

He is also known for being very close to Kanye West who likes his work a lot and produced a lot of his songs and they became good friends.

He was born as Terrence LeVarr Thornton on May 13, 1977, in New York City in the United States. He said that he is very thankful for his parents who were always very active in his childhood. They worked for his children and wanted to provide a good life for them.

His family lived in the Bronx but they didn’t stay there for long. They relocated to Virginia Beach, in the State of Virginia. He has spent his whole childhood there, alongside his brother Gene who was also interested in music just like him.

They were teens when they started selling drugs because it was easy money. They thought they could be living off of cash like that, but they didn’t realize that it would be very dangerous and they would stay well known to the police.

Their parents found out about it, but they thought that only Gene was doing it so they kicked him out of the house and Terrence stayed at home.

It was in 1992 that the duo, Terrence and his brother, started showing more interest in hip hop and they created their own hip hop group „Clipse“. They wanted to make it in the world and pay back to their parents without doing illegal stuff.

His stage name was Ferrar and his brother was called No Malice. They were soon introduced to Pharell Williams, also a part of the duo with Chad Hugo, who were together a production duo named The Neptunes. They had a great time making music together so many people thought they would be very successful.

This production duo liked their sound and made products for their work and soon secured them a record deal in 1997, with Elektra Records. They were very happy that the record deal was ready to give them a chance.

They started working on their first album, which was gonna be named „Exclusive Audio Footage“.

Before the album was released they released one single titled „The Funeral“ which was a commercial bust and their album was not being released because of it.

The duo was soon dropped from their label and their contract was torn so they felt very bad about it. They wanted to keep on making music but didn’t know if anyone will give them a chance.

After this happened Ferrar didn’t lose faith but he did change his name into Pusha T. Although he didn’t have his label and didn’t release any album he was „around“, making appearances on other rapper’s work as a guest.

He appeared on „Good Stuff“ by Kelis and „Run Away“ by Nivea. It was because The Neptunes liked his work and since they produced both of this song they managed to get him into the singles.

In 2001, Pharrell Wiliams managed to find them a new deal, this time through Star Trek which he owned. He can own a bunch of his success to Pharrell because he knew that Pusha T is going to be a big success and he pursued his career.

The duo Clipse started working on a big album which The Neptunes produced completely.

In 2002 their duo released a single named „Grindin’“ which became a huge hit, coming up to No. 30 on the Billboard Hot 100 Chart. The fact that someone ends up on Billboard’s chart means that they will get a much bigger audience.

It was one of the biggest summer hits. Their 2nd single was named „When the Last Time“ and it came as high as No. 19 on Billboard charts.

Pharrell and the duo were very pleased with it so they soon released their album named „Lord Willin’“. It was released in August 2002 and went on No.1 of Top R&B/Hip Hop Album Charts,

It reached golden sales in October 2002 and it was a huge success for them, not to mention the income they have earned.

In 2003, the Close continued making music for their 2nd album. It was going to be named „Hell Hath No Fury“ but they came up to a problem when their label became a part of a merge.

Clipse had to stay with „Jive“ while most of the others went to Interscope Records. The Clipse became frustrated because the label overlooked them over pop artists.

That’s why their finished album was delayed a lot. They asked Jive to release them from their contract but they wouldn’t.

The brothers sued them and started their own label „Re-Up“ Records and changed their duo into a bigger hip-hop group named „Re-Up Gang“.

Their new fellow members were Ab-Liva and Sandman.

In 2006, their album was finally released through Re-Up and Jive after they reached an agreement on it. It was completely produced by The Neptunes and it came to No. 14 on Billboard charts.

XXL gave their album a great rating, with giving 5 stars to the album.

In 2007 they were finally released from Jive and soon signed to Columbia Records. The album was named „Til the Casket Drops“ but it was not an as big success as the albums weren’t produced only by the Neptunes but with Sean Combs and others.

The brothers decided to put Clipse on hiatus and try to pursue their solo careers. Pusha T got signed to GOOD Music owned by Kanye West in 2010.

He appeared on his hit „Runaway“ which he performed with him at 2010 MTV Video Music Awards. He also guests appeared on singles by Lloyd Banks and Tabi Bonney.

He signed a management deal the same year, with NUE management agency. He released his single „My God“, which was produced by Hit-Boy.

It was a success so he soon signed a record deal with Def Jam in the summer of 2011.

In the spring of 2011, he has released his first solo mixtape which he named „Fear of God“.

The mixtape has featured many respectable artists such as Kanye West and 50 Cent, alongside Pharell Williams.

The tape gained huge popularity which motivated him to start working on his EP titled „Fear of God II: Let Us Pray“.

The album gained good critics and was well received by fans. He was happy that his fanbase was growing daily and that he was getting a bunch of recognition for his work.

In 2011 he made a TV appearance on the HBO series titled „How to Make It in America“.

He made a mixtape with Re-Up Gang titled „Long Live the Cane“. He announced the return of the Close too.

He also started working on an album with Kanye West who would produce it. He liked working with Kanye, but Kanye is certainly not the type of person people are happy to see their favorite artist collaborate with.

Pusha T guest appeared on „What Do You Take Me For“ by Pixie Lott, from her album „Young Foolish Happy“. This song was a huge hit in the United Kingdom.

He released his lead single „Mercy“ as an announcement of his album „Cruel Summer“ which is his compilation album. It was featured by Kanye West, Big Sean, and 2 Chainz.

In 2012 he has released „Exodus 23:1“, made in collaboration with The-Dream and aimed against Lil Wayne and Drake in a form of a diss track.

Lil Wayne made a diss track back on which Pusha-T never responded. He also worked alongside Raekwon and Danny Brown on the songs for the soundtrack of the movie named „The Man with the Iron Fists“.

His next single was „Pain“ made in collaboration with Future. By the end of 2012, Pusha T announced his lead single „Blocka“ for his new mixtape which will be named „Wrath of Caine“. He also performed at 2013 Coachella Festival.

His first studio album came out in October 2013 named „My Name is My Name“ and had guest appearances from many known named in the world of hip hops such as Rick Ross, Future, Kendrick Lamar and Young Jeezy.

The album was praised by the critics and came to No 4 on the US Billboard 200 chart. The album was produced by several producers, from The Neptunes to Swizz Beatz.

He made a collab with Linkin Park which resulted in giving his vocals to their single „I’ll Be Gone“. He said that this was one of the most interesting collaborations he has ever done and that he was very happy to work with these guys.

He has released a new single called „Lunch Money“ in November 2014 and it was produced by Kanye West. It received very good feedback and became a true rap anthem.

In 2015, he became the new president of a GOOD Music record label.

His new album was titled „King Push – Darkest Before Dawn: The Prelude“ and was released in 2015 getting huge acclaim from critics and was streamed in millions.

But this album was only the prelude for his real album „Drug Dealers Anonymous“, featured by Jay Z. He wanted to present some of the world’s biggest problems on this album and therefore he created music that spoke about these issues.

In 2017 he made a new collaboration with Linking Park and the first with Gorillaz.

His album „Daytona“ was released in May 2018 and gained good critics. It was linked with a controversy connecting Kanye West paid $85 000 to get the photo for the cover. The photo was one of Whitney Houston’s bathrooms filled with drugs.

Pusha T also released a single „The Story of Adidon“, which was a diss track aimed to Drake.

Pusha T was also involved in a dispute with the rapper „Consequence“ who claimed that Pusha T’s song „My God“ was one of his songs that were stolen.

He even released a song called „The Plagiarist Society“. Later on, he released another track against Pusha T, Kanye West and their label GOOD Music.

It was named „Everybody Told Me 2 (Straighten It Out)“. Pusha T responded with „Go’N’Get It“ remix. In 2011 both artists ended the beef.

Pusha T’s biggest problems were always Lil Wayne. He didn’t like to work with him and he was his biggest opponent.

Clipse made a song „Mr. Me Too“ which was considered to be a diss track against Lil Wayne so he responded with his own track titled „Goulish“.

He also had beef with Drake through „Exodus 23:1“ and „H.G.T.V.“ on which Drake responded with „Two Birds, One Stone“. Pusha T accused Drake of having a ghostwriter on his song „Infrared“ in 2018.

He received money from many endorsement companies such as Adidas, Beats by Dr. Dre and BAPE. He promoted Chanel on his Instagram account.

His favorite rapper is Big Daddy Kane. He wears only Rolex watches. Pusha T is a big fan of fast food.

As for his personal life he has dated Fefe Dobson in 2010. She is a known songwriter and singer. They started dating after they collaborated on one of her singles titled „Stuttering“.

He started dating Virginia Williams in 2012 and they even got engaged in 2017.

Bernie Sanders is his favorite politician and he claims that he would have won Donald Trump if Hillary Clinton wasn’t competing.