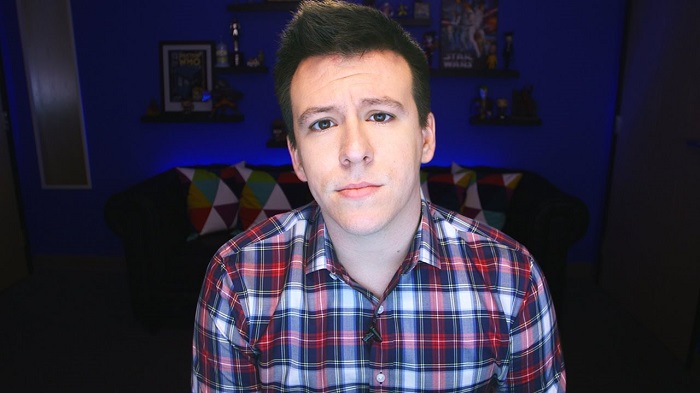 Phillip DeFranco is a popular American YouTube star and video blogger. His real name is Philip James Franchini and he is best known for his The Phillip DeFranco Show (PDS).

Philip DeFranco’s channels have over 6 million subscribers and more than 2 billion views, so it is obvious that Philip DeFranco is a very popular YouTube personality.

If you want to know more about Philip DeFranco and his life, you need to read this article and we hope you will find out many things you didn’t know.

Philip DeFranco was born on December 1, 1985 in New York City – The Bronx. Philip DeFranco attended various universities. He attended the University of South Florida and then he studied biology.

It is known that in 2007 Philip DeFranco lived in Florida and later he moved to Atlanta. He used to work as a waiter in many restaurants and he started to make his videos in that period. It is interesting that Philip DeFranco didn’t have money at the beginning of his career and he lived in his car for some time.

Philip De Franco moved back to Tampa Florida with his father because he should return to the college, but he didn’t do it. Philip De Franco has a stepmother and she is working at a car shop.

YouTube career of Philip DeFranco has begun when he was at East Calorina University. At that time he created his YouTube channel, which was called The Phillip DeFranco Show. In this show Philip DeFranco is presenting pop culture, politics, celebrity gossip and current events on his own satirical manner and with lots of humor.

At the beginning of his YouTube career, Philip DeFranco asked his viewers for donations and he claimed that he didn’t have money at all. He sold everything he had except camera, his clothes and Mac.

It is known that in 2007 Philip DeFranco also created his 2nd YouTube channel, which was called PhilipDeFranco and it consisted of a series of different vlogs called The Vloggity.

Also, in 2007 Philip DeFranco uploaded a video which was called Big Boobs and You. This video was very popular at that time and it had more than 1.8 million views. After that Philip DeFranco started to create videos about sex and gossip.

As we have already said, Philip DeFranco had a large audience and he used it to win a game promotion competition called the Spore Creature Creator. He won that competition and he had the chance to choose the charity which will receive $15 000 donation. In 2008 Philip DeFranco also won Wired’s Sexiest Geek competition due to his large online audience.

In October 2008 Philip DeFranco had a role in popular web series Hooking Up. This series consisted of 10 episodes. In this series Filip DeFranco co-starred Kevin Wu and Jessica Rose. Also, many other internet celebrities have appeared as guests in this web series.

In 2012 Philip DeFranco became very popular and he had even 30 miliion views in only one month. In that year he was the host at the 25th anniversary of Discovery Channel’s Shark Week.

Philip DeFranco’s main channel on YouTube has over 5 million subscribers and about 1 billion views. We have already said that his network of channels has over 6 million subscribers and more than 2 billion views. His popular YouTube channels are also Philly D (PhilipDeFranco), and SourceFed. Philly D is actually his personal vlog and it is his behind the scenes channel, SourceFed is focused more on pop culture and current events.

Now when you know about the career development of Philip DeFranco, we will also tell you about his personal life.

The first thing we will say about Philip DeFranco’s personal life is his polycystic kidney disease. His father and his grandfather also suffered from this disease.

Philip DeFranco lives in Sherman Oaks, Los Angeles and he is married with Lindsay Jordan DeFranco. He proposed Lindsay in August 2013 at his show called DeFranco Loves Dat AZ. This show was in Tempe, Arizona and the audience asked Lindsay would she ever marry with Philip DeFranco. It is very interesting that Philip DeFranco proposed Lindsay on the stage. Now they have a son whose name is Philip “Trey” DeFranco III. He was born in April 2014. In February 2017 Philip DeFranco announced that he and his wife are expecting their second child that will be born in September this year.

Philip DeFranco admits that he used cannabis when he was younger because it helped him sleep better.

If we are talking about his political opinions, we must say that Philip DeFranco is a libertarian. In the presidential election in 2012 he voted for Gary Johnson, who was a Libertarian nominee.

Philip DeFranco won all these awards that we have mentioned and he has also been nominated for many other awards.

Religion: He was raised Roman Catholic, but he is atheist.

You have seen in this article who Philip DeFranco is and how he has earned his net worth of $4 million. As we have said, Philip De Franco is a popular American video blogger and YouTube star and he has earned his net worth by posting his videos on YouTube. His videos are covering celebrity gossips, politics and current events. He uses ironic comments and a lot of humor in his videos, which is very interesting to the audience. His YouTube channel PhilipDeFranco is one of the most popular channels on YouTube and it has more than 6 million subscribers.

We have also mentioned The Philip DeFranco Show (PDS), which have brought big popularity to Philip DeFranco. He also created other channels on YouTube such as SourceFed and ForHumanPeoples, but he sold these channels to Disocvery Digital Networks in 2003.

When it comes to the personal life of Philip DeFranco, we have said that he is suffering from polycystic kidney disease, which he has inherited from his father and grandfather. Philip DeFranco is married with Lindsay Jordan DeFranco and they have a son. Also, they are currently expecting their second child.

Philip DeFranco has won many awards in his YouTube career and he is one of the most popular YouTube personalities today.