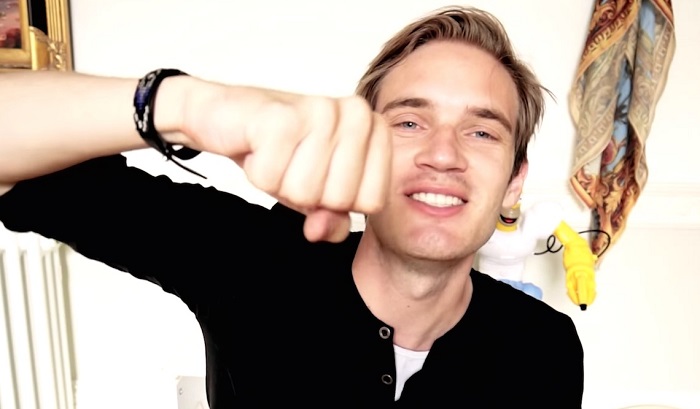 PewDiePie is the YouTube name of the most followed game commentator on the web, whose channel has 54 million subscribers and has for a number of years been the number one most followed channel on YouTube.

In this article you can find out all interesting details about the intriguingly popular YouTube personality of PewDiePie, the details of his private life, Felix’s net worth, and where to follow PewDiePie on social networks.

Felix Kjellberg, known better as PewDiePie, was born 24th of October 1989 at the second largest city in Sweden – Gothenburg. Felix is the second child of Ulf Kjellberg and Lotta Kristine Johanna Kjellberg. Despite the fact his parents are both successful Chief Executives, PewDiePie didn’t get the high education he was supposed to. Although he went for a degree in Industrial Economics and Technology Management, fate had it that the clever youngster didn’t like the professional path he was at and decided to drop out in 2011.

Pewds already had a YouTube channel at the time, but he didn’t know what he was going to dedicate all his energy to after dropping college. Felix had a passion for working with Photoshop and entered a few contests in the field that almost earned him an apprenticeship with a top advertising agency in Scandinavia. When he lost that big chance for success, PewDiePie started selling prints of his Photoshop work and also worked at a hot-dog stand in order to finance making videos for YouTube.

Felix Arvid Ulf Kjellberg joined YouTube in December 2006 taking an alias “PewDie”. On that first account Pewds recorded 14 videos. He chose the channel name inspired by the games he played. The word “pew” represented the sound a laser gun makes, and the verb “die” is usually used in the spur of the gaming moment. After forgetting the channel password, PewDie had to create a new channel in April 2010, so he added a third random word to his alias, although some say he chose the word “pie” for his love of the famous food. Thus PewDiePie was born.

In 2012 PewDiePie attracted wide media attention for reaching one million subscribers and his dark humor during game commenting. At the time PewDie was largely famous for his horror game commenting, and also indie games playing.

PewDiePie became #1 most subscribed channel on YouTube for the first time on the 15th of August 2013. That is when the battle for the number one spot began which lasted for more than three and a half months. During the period PewDie lost and regained the title two times, competing with YouTube Spotlight. On the 9th of December PewDiePie claimed the title once again and has been first and the most followed on YouTube ever since.

Pewds reached a milestone of 50 million subscribers in December 2016. As the number of subscribers war reaching the milestone Felix publicly promised to delete the channel after hitting the big number. However, he deleted a different channel of his instead – Jacksepticeye2, a channel PewDiePie created as a joke with his good friend and YouTube personality Jacksepticeye.

As of April 2017 PewDiePie is the most viewed channel on YouTube hitting 15 billion video views.

Many have asked the question what is the secret behind PewDiePie’s enormous popularity. Some argue that it’s in the way Felix addresses his audience as peers, using a friendly tone and a lot of humor, keeping his fans close to his heart and making them feel as if they were bros. PewDiePie even refers to them as “Bros”, and calls his fan base “BroArmy”. His symbol is a closed fist, and he ends all of his videos by leaning his fist into the camera.

For the special amusement of the BroArmy Pewds regularly makes videos for series called “Fridays with PewDiePie”. The episodes are published on Fridays and are made as vlogs centered not about games, but about PewDiePie’s fans, channel news and work, sometimes even about Felix’s personal life.

PewDie started as honest, charismatic and unfiltered game commentator, which was most appealing to the audience. Not to mention his cute Scandinavian accent. The YouTuber has struck the like nerve of a huge audience of young people, most of which even younger than himself.

PewDiePie was largely criticized for profanities and harsh jokes, they even landed him in the center of a controversy recently. At the beginning of 2017 PewDiePie made a joke video filming two guys holding a sign “death to all Jews”. He found the pair via site Fiverr, hired them to make the video, and requested of them to hold the sign. In the video Felix demonstrated how people would do pretty much anything for just $5, and he mocked the trend.

Following the controversial video Wall Street Journal published an article about PewDiePie saying he was an anti-Semite. The Journal mentioned PewDiePie’s jokes from nine videos as proof of the claim. The article started an avalanche of similar writings in the media that resulted in PewDiePie’s five year contract with MakerStudios being terminated and his show Scare PewDiePie being cancelled from YouTube Red.

PewDiePie apologized but also criticized the media for making too big of a deal out of a joke. His close friends stud up for PewDiePie and defended him as being wrongly accused.

PewDiePie has an older sister Fanny Kjellberg, two years older than Felix, who is married and with a child, which makes Pewds an uncle.

The famous YouTuber currently lives in England with a girlfriend who is from Italy. Marzia Bisognin, known on YouTube as CutiePieMarzia or just Marzia, has been PewDiePies girlfriend since 2011. The couple met on the web, both of them being YouTubers, they first started exchanging messages and meting from time before the relationship began.

Marzia was the one who contacted Felix first. A friend of hers shared PewDie’s video with her, and she thought it was funny, so funny that she wrote to PewDie to tell him that. They started writing to each other on Facebook, PewDiePie visited Marzia in Italy three times before she moved to Sweden to live with him, and later he moved to Italy to live with her for a while, before choosing Brighton in England as their new hometown. PewDiePie and Marzia often travel together and sometimes do game playing together.

Chalmers University of Technology (dropped out in 2011)

Hobbies: game playing (both a job and a passionate hobby)

Pet own: two pugs Edgar and Maya and a toad Slippy

Net worth: PewDiePie has been said to have earned $124 million since 2010, but he pays a huge income tax of 56% to his home country Sweden. Nevertheless he is a wealthy YouTuber, with more than $60 million net worth in 2016.

PewDiePie is a man who managed to turn his hobby into a profitable business. Felix was as a child interested in games. He used to skip classes to play video games with friends and also liked to draw game characters.

Today the boy who liked gaming has two games made for and named after him. In both games PewDie gave voice to his character and both games were downloaded record amount of times on the first day of their release.

Game “Pewdiepie’s Tuber Simulator” simulates the life of a YouTube personality, so fans can feel how it is to be a YouTuber, to make videos hunting for views; they have a chance to gain subscribers and overthrow PewDiePie from his throne of the number one most followed.

PewDiePie closely collaborated with the makers of the game “PewDiePie: Legend of the Brofist” and the game is full of references to his previous videos, humor and popular culture. In “Legend of the Brofist” the player’s task is to save PewDiePie from losing his fans a barrel army is attempting to steal. PewDiePies’s girlfriend Marzia also gave the voice for this game, alongside some other famous YouTubers: Jacksepticeye, Markiplier, CinnamonToastKen and Cryaotic.

Felix Kjellberg used his popularity to raise more than $2 million for charity. PewDie helped collect money for Save the Children Fund, World Wildlife Foundation and RED, a charity centered on eliminating HIV/AIDS in Africa.

In 2014 PewDiePie decided to shut down the comments to his videos, claiming they were mostly spam or hate comments, but he enabled them back and sometimes replies.

PewDiePie is a fan of anime. Radiohead is his favorite music band, and he loves to watch “South Park”. Pewds even gave voice to himself in two episodes of “South Park” that featured the king of the Tube as one of the characters.

PewDie naturally has a clothing line. He also published a book, but there is nothing expected about that, for it is not an autobiography or anything common for a famous person to write. PewDiePie’s book is as original and amusing as his video performance is, because he published a parody of self-help book, titled “This book loves you”. It was released in 2015 by Penguin Group and includes aphorisms and jokes.

PewDiePie is YouTube’s most followed and viewed personality, game commentator and web based comedian, who has more than 54 million subscribers and 15 billion views. 27-year-old Swedish vlogger Felix Arvid Ulf Kjellberg, who stands behind the alias PewDiePie, is considered one of the most influential YouTube personality of our time. PewDiePie has kept the place of the “one with the most followers” for almost 3.5 years, a popularity that gave him more than $60 million net worth in 2016. Kjellberg helped raise more than $2 million for charity.

PewDiePie has been praised as being personal, energetic and fun, but criticized for profanities and harsh jokes that landed him in the middle of a controversy. Jokes about Jews cost PewDie partnership with MakerStudios and resulted in some projects of his being cancelled.

With numbers of views and subscribers continuing to grow Felix Kjellberg a.k.a. PewDiePie is and will surely continue to be one of the most media covered and talked about video content maker, web based comedian and celebrity.