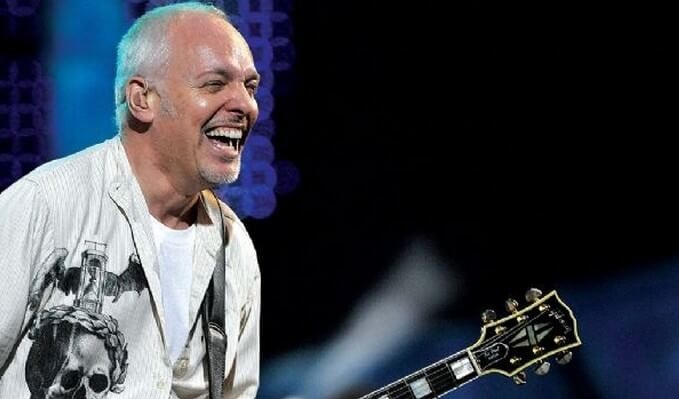 Pete Frampton is a very known name on the English music scene with a long career in the rock genre and many hits released through time.

He is a great musician, skilled songwriter, and guitarist who became especially respected for his work with popular rock bands The Herd and also Humble Pie.

His greatest work is his most successful album named Frampton Comes Alive! which became a hit worldwide.

His work with stars like David Bowie and Pearl Jam is very appreciated amongst fans and other colleagues musicians.

He was born as Peter Kenneth Frampton on April 22, 1950, in the town of Bromley, located in the Kent province in England.

He was brought up by his loving mother Peggy and his father Owen, who worked as a school teacher.

His father worked in the Art department and was talented in several areas so it was no wonder that his son inherited some of that talent.

He was a very young boy when he played with some old stuff at the attic where he discovered an instrument called banjolele which has previously belonged to his grandmother.

He started learning to play it himself and was later encouraged by his parents to take music lessons. They have realized his potential and great will for learning.

He was especially interested in learning how to play the guitar but he also liked to sing. He was a huge fan of Cliff Richard & the Shadows, Buddy Holly, Jimi Hendrix and of course he was very fond of one of the biggest bands of all times: The Beatles.

His father wanted to teach him about different kinds of music so he often introduced him to new artists.

It was because of his dad that he learned all about gypsy jazz through the work of a Belgian guitarist named Django Reinhardt.

He was only twelve years old when he became a member of a band named The Little Ravens which made him more sure that he wants to have a career in music.

He went to Bromley Technical School where he met David Bowie, who was a few years older than him but had a huge passion for music just like Peter.

Peter’s father Owen was David Bowie’s art teacher too so the boys were influenced by the same man.

David Bowie had his own band at that time, named George and the Dragons while Peter was a part of The Little Ravens.

Peter had a great voice as a kid and he soon became a great child singer. He joined a band called “The Heard” and became their singer and a guitarist.

The band has produced several hits and Peter started getting noticed by the public. Teen magazine “Rave” made him “The Face of 1968”.

He was 18 years old at that time and he was very pleased with his success. It was also the year that changed his life because he formed Humble Pie band alongside Steve Marriott.

He was popular at that time so he already made collaborations with Jerry Lee Lewis, and Whistle Rymes, which brought him even more recognition amongst other music artists.

One man changed the way he played his guitar. It was Pete Drake who showed him how to use  “talk box” which later became his most prominent tool.

Peter and Humble Pie released four albums before Peter left the band in 1971. They were named: As Safe as Yesterday is, Town and Country, Humble Pie and Rock on.

Peter decided to focus on his solo career and started releasing his work. He was hoping that he would make an impact on his listeners and breaks down his fascinating way of playing the guitar to his fans.

His debut album was named Wind of Change and was released in 1972 by the A&M Records. It contained ten of his songs and was featured by one of the Beatles, Ringo Starr, and Billy Preston.

In 1973, the same record label released his classical rock album called Frampton’s Camel which he produced himself.

In 1974, he released a very successful single named Somethin’s Happening and started going on tours to promote his work as a solo artist.

1975 brought a new album titled simply Frampton which came as high as No.32.on the Billboard charts.

Although all of his albums became very known they didn’t bring him many financial benefits since they had moderate sales. It was in 1976 that Peter found out how it is to become a star.

This double live album spawned several hits like “Show Me the Way” and “Baby, I Love Your Way” which had a huge amount of airplay on radio stations.

This album is considered his true breakthrough album. The album was held up on the Billboard 200 for over four months. This live album ended being a certified platinum eight times.

Peter’s fame brought him attention and publicity leading him to appear on the cover of Rolling Stone.

He was even invited to the White House by President Ford.

He was also honored with his star on the Hollywood Walk of Fame which was something every musician wanted.

He was invited to co-host the 1977 Rock Music Awards together with Olivia Newton-John but he later admitted that it was one of his poor choices.

In 1977 he had released his new album titled I’m in You which was his 5th album, also released through A&M. Although it contained a hit, it didn’t have such good sales.

In 1978 he joined The Bee Gees to star in a movie titled Sgt. Pepper’s Lonely Hearts Club Band but the film was a bust. The album however did very well in sales.

It was the same year in which he went through a huge trauma after he was in a horrific car accident that closed one chapter of his life – the prominent one.

After this tragic event, his career went downhill. He continued making music but not which much success. He even had a period of drug abuse due to the wounds he received.

The period in which he had a car accident was unfortunately bad for him in his personal life because his longtime girlfriend who he wanted to marry left him.

In 1979 he recorded his new album named Where I Should Be. It was his sixth album and was released through the A&M record label.

It was followed by his Rise Up album from 1980 but it was released a year after with a new name: Breaking All the Rules.

Another tragic thing for him was losing all of his guitars in a plane crash. His favorite guitar was a black Les Paul Custom which was later recovered and returned to its owner in 2011.

Peter continued releasing albums all through the 80s although with moderate success.

He released The Art of Control in 1982 and it was his last album which was released through the A&M label.

Peter didn’t like this album and one of the reasons he left this label was because he was forced to record a commercial album and not the album he wanted. The album peaked at No.175 on the Billboard Hot chart.

Premonition came out in 1986, through his new label Atlantic Records but it had moderate success.

His single “Lying”  became a huge hit in 1986 and he reconnected with David Bowie the same year.

He was featured on David Bowie’s album Never Let Me Down in 1987.

Peter started a collaboration with his old friend from Humble Pie Steve Marriott. Marriot died in a house fire after returning to his home England. This was a huge shock for him and caused him to isolate for a while.

He released his new album Frampton in 1994, which was followed by his Frampton Comes Alive! II album. The album was advertised a lot but didn’t have promising sales.

In 2003, the 12th album Now was released through 33rd Street Records and it was produced solely by Peter.

Thank You, Mr. Churchill, is the name of his album from 2010 after which he went on a tour.

In 2011 he guest appeared on “Guitar Center Sessions” and in 2013 he started his “Frampton’s Guitar Circus” tour through the US.

He guest appeared in a tribute to the Beatles on their 50th anniversary titled  Night That Changed America: A Grammy Salute to The Beatles.

In the summer of  2014, he released an album called Hummingbird in a Box.

In 2019, Peter retired from touring with his  Peter Frampton Finale—The Farewell Tour caused by his medical condition. He was diagnosed with a progressive muscle disorder, myositis, and atrophy.

He founded The Peter Frampton Myositis Research Fund located at Johns Hopkins where he gets his treatment.

He released his latest album in the summer of 2019, and it peaked at No.1 on Billboard Top Blues Albums Chart.

In 1996, he appeared in The Simpsons cartoon in an episode named  “Homerpalooza”. He also appeared in the Family Guy.

In 2000, he assisted Cameron Crowe in an autobiographical movie Almost Famous.

In 2001, he made an appearance in Back-to-School Rock ‘n’ Roll Comedy Hour.

He also appeared on The Colbert Report in 2006.

He made an appearance on The Oprah Winfrey Show in 2010. He is one of her favorite musicians.

As for his personal life, he had been married three times but he is not married at this moment.

He was in a relationship with Penny McCall who later sued him for palimony.

He got married to Barbara Gold in 1983 and they were together for 10 years. They have two children together: Julian and Jade.

In 1996 he got married to Tina Elfers, and they gained a daughter Mia Frampton.

Peter is a vegetarian and tries to lead a healthy life due to his condition.

He has a condition called inclusion body myositis which causes his muscle to be weaker and he is afraid that he won’t be able to play his guitar any more shortly. That is why he organized his farewell tour in 2019/20.