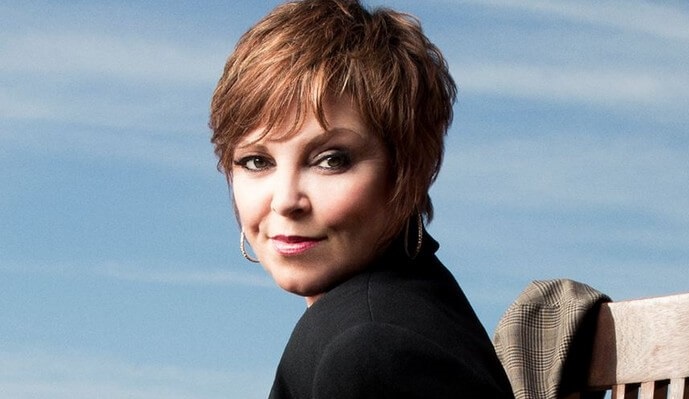 Patricia Giraldo, also known as Pat Benatar is a singer and a songwriter, an actress from the United States.

She won a Grammy 4 times and has two multi-platinum and five platinum albums.

Fifteen of her singles were in Billboard’s Top 40 on the list and some of them are „Love is a Battlefield“, „Invincible“, „Hit Me With Your Best Shot“ and „We Belong“.

She has been nominated for 2020’s Rock & Roll Hall of Fame induction.

Pat was born on January 10th, 1953 in Greenpoint located in Brooklyn. Her full name is Patricia Mae Andrzejewski.

Her father was Andrew Andrzejewski and he was a sheet-metal worker and her mother Mildred was a beautician. Her family moved from Poland to New York in search of a better life.

When she was little she started loving theatre and decided to get voice lessons. When she was eight she sang for the first time and it was a song „It Must Be Spring“. She sang it at Daniel Street Elementary School.

After that, she went to Lindenhurst Senior High School and she was in a musical where she played Queen Guinevere from Camelot. She also sang at all sorts of school events for Christmas and similar.

Pat trained so she could enter the Juilliard school but decided that it would be better for her to pursue an education in health at Stony Brook University.

Unfortunately, only a year later she had to drop out because she married her first husband, Dennis Benatar.

He was an army draftee and served at the Army Security Agency. At that time Pat was working as a bank teller in Richmond in Virginia but was dreaming of a bigger career.

In 1971 she quit this just because she wanted to get a career in music. This happened after she saw Liza Minnelli in Richmond and realized that her time will pass if she doesn’t wake up soon.

She got a job at a nightclub called „The Roaring Twenties“ where she was a waitress. She got the first gig at Sam Miller’s basement club with Coxon’s Army, a band that was a regular there.

A bassist from this band named Roger Capps was a bass player for Pat after she got famous.

In 1974 she made a single „Day Gig“ and it was produced by Phil Coxon, frontmen of the Coxon Army.

A year after she performed at Catch a Rising STra comedy club located in New York. She sang “Rock-a-Bye Your Baby With a Dixie Melody” by Judy Garland and she was noticed by the club’s owner, Rick Newman.

After her husband was discharged they moved to New York and Pat started being a regular performer at a club called Catch a Rising Star.

In 1975 she was in a musical „The Zinger“ made by Harry Chapin in the Performing Arts Foundation’s Playhouse until 1976.

In 1976 she recorded jingles for Pepsi and other brands like Jello-s and Sheraton.

In 1978 she headlined New York City’s Tramps nightclub and caught the eye of many companies. After only a week she signed to Chrysalis Records.

Pat and Dennis divorced after that but Pat decided to keep the surname.

In 1979 Pat released her debut album titled „In the Heat of the Night“. This album reached 12th place on the US Album chart.

The album was produced by Mike Chapman and Peter Coleman. Some of it was also written by Nicky Chinn, Roger Capps, John Mellencamp, etc.

This album was platinum four-times in Canada and was very popular.

The first single from the album was called „If You Think You Know How to Love Me” and it was released in 1979 but it wasn’t so successful.

In the summer of 1980, she released an LP called „Crimes of Passion“. A song called “Hit Me with Your Best Shot” was very popular. This LP had a controversial song titled  “Hell Is for Children”. This song was written after she saw a bunch of articles on child abuse.

The song “Hit Me with Your Best Shot” was her first single to go in the top 10. The single got a gold status in the US. It was in second place for 5 weeks.

Pat won her first-ever Grammy Award in the category of „Best Female Rock Vocal Performance“ for this album.

This album remained on the US chart for 93 weeks which was a big accomplishment for her.

In 1980 Pat and her husband, Neil Giraldo were on the cover of Rolling Stone magazine.

In 1981 she released her third LP called „Precious Time“ and only a month after it got to No.1 on the Billboard US Top 200 LP chart.

This album was also the first one to be on charts in the UK (it was No.30). The lead single of this album was „Fire and Ice“ and she won a Grammy Award for it in a category „Best Female Rock Vocal Performance“.

This album was her third album to be certified platinum by RIAA.

In Canada it was double-platinum.

In 1982 she released a new LP this time titled „Get Nervous“ and it brought a hit song „Shadows of the Night“.

This album reached fourth place in the US and was platinum-certified.

She got another Grammy for the mentioned hit in the category of „Best Female Rock Vocal Performance” in 1982.

The singles „Looking for a Stranger and „Little Too Late“ were also pretty successful.

This album was also platinum in Canada.

In 1983 she made „Love is a Battlefield“ and it was released in December that year. With this single, she dabbled in more pop sounds and she made a music video for it that had a storyline.

This single went to No.5 in the US and was a huge success. It topped the charts in Australia for seven weeks in a row. It was in 49th place in the UK.

Pat got another Grammy Award for this song in the category „Best Female Rock Vocal Performance“.

This song was from an album „Live from Earth“ which was recorded in 1982 and 1983 and it went to No.13 on the US charts and was certified platinum.

Alongside her Grammy-winning hit, „Lipstick Lies“ was also a successful song from this album.

In 1984 she released her fifth album called „Tropico“. The song from it called „We Belong“ was released ‘before the release of the album and went to No.5 on the US charts. It also peaked at 22nd place in the UK.

After that, she released an „Ooh Ooh Song“ which was also successful. It was also platinum-certified and is her sixth album to be.

In 1986 the song „We Belong“ was nominated but this time in a category „Best Female Pop Vocal Performance“ which was new for her.

In 1985 she released her sixth album titled „Seven the Hard Way“ and it featured a Grammy-nominated single titled „Invincible“ which was also a theme for the movie called „The Legend of Billie Jean“.

Before the release of this album her single „Seks As a Weapon“ went to No. 28 on the charts.

The album was No.26 in the US and got Gold certifies.

In Canada, it was her seventh in a row platinum-certified album.

In 1988 she released another album called „Wide Awake in Dreamland“ and it had a single „All Fired Up“ which was again Grammy-nominated and reached No.19 in the US and UK.

This song was one of the biggest hits that year. The album was also certified Gold and Platinum in Canada.

In 1991 she released an album called „True Love“ which was a blues album and it featured a band called Roomful of Blues in it. This album was certified gold in Canada and is her first album that’s not platinum in Canada.

Two years later she released „Gravity’s Rainbow“. The song „Everbody Lay Down“ went to No.3 on the charts.

This album is Pat’s last album to be released by Chrysalis records. This album wasn’t commercially successful as her previous work.

In 1997 she released „Innamorata“ with the CMC International Record label. This album wasn’t a success.

In 2003 she released „Go“, another album, which also wasn’t as successful. Some of the songs from this album were „Girl“, „Have It All“, and so on.

In 2015 she released a holiday song titled „One December Night“.

In 2017 she made a song „Shien“ for the Women’s March. The same year she made „Dancing Through the Wreckage” for the documentary „Served Like a Girl“.

This song was nominated for the Best Song for a Documentary by the  Critics’ Choice Awards.

In 2006 her song „We Belong“ was used as a campaign for Sheraton Hotels. „Hit Me With Your Best Shot“ was also use din Chili’s commercial and We Belong was in a Pepsi commercial.

As for her private life, she married twice.

First was to Dennis Benatar, her high school sweetheart. She was only 19 at that time. They divorced 7 years later.

In 1982 she married Neil Giraldo, a guitarist, writer, and producer. They have two daughters together. They currently live in L.A.

Her favorite hobby is cooking and she especially likes to cook Italian food.