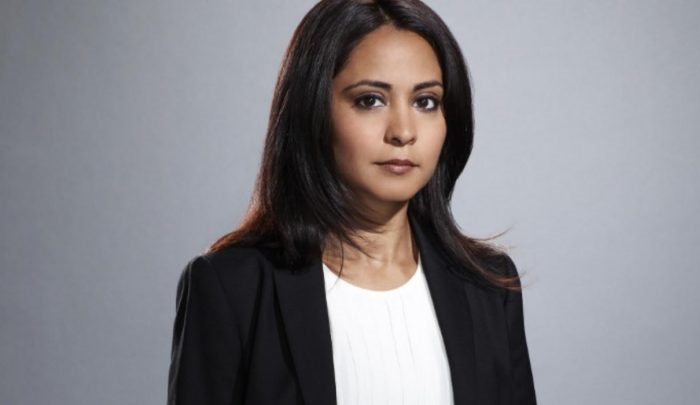 Parminder Nagra is a known English actress whose family originates from Punjab and who rose to fame with her roles in  TV series ER and The Blacklist.

She is also recognized for her role in the series “Agents of S.H.I.E.L.D.”

She was born as Parminder Kaur Nagra on October 5, 1975, in the city of Leicester located in England, United Kingdom.

Her parents are named Sukha Nagra and Nashuter Nagra.

They came to England in the ’60s and gained work in the factory and raised their children peacefully and proud.

She has three siblings and is the oldest of them. She has two brothers and a sister.

She was a pupil in Leicester’s Primary School and she started showing interest in music at a very early age.

She started learning to play the viola and entered the youth orchestra at her Soar Valley College.

She started appearing in theater productions in school.

She started having drama instructions by Jez Simmons who later invited her to join him in his theater company called Haithizi Productions. He was the artistic director of the company.

She decided to accept his offer and she soon became the lead actress after the previous lead actress left that position.

Jez was sure that he made a good choice about putting her in the lead because he considered that she had great qualities, other than her singing and acting.

He believed that she has an aura that attracts people.

Nagra decided not to enter college although she was a good student and could have gained a degree.

Instead, she decided to pursue her acting career and have a job she likes more than anything.

In 1994, she was cast for the role of a Princess in a special pantomime Sleeping Beauty. She started working with Indian theater companies and she eventually made it to television.

Although she didn’t finish any acting schools her talent was recognized by Joan Brown, a talent agent who was sure that Nagra had a great career in front of her.

She signed her to the agency and started finding her roles.

She gained a minor role in a British drama series called “Casualty” and in a TV movie called “King Girl”.

In 1997, she was hired for a role in a drama movie “Turning World” where she starred alongside a famous Indian actor named Roshan Seth.

She was also noticed for her role in David Decoteau’s drama movie Skeletons.

It was in that same year that she played the role of a Hindu boy in a movie titled “A Tainted Dawn”.

In 1998 she reappeared in “Casualty” which was a good sign for her.

She was also praised for her comedy skills in a movie titled “Fourteen Songs, Two Weddings and A Funeral”.

In 1999 she appeared alongside Colin Firth in a TV movie “Donovan Quick” where she acted as a clerk.

This year also brought her a very demanding role as a rape victim which showed all her acting skills.

She also appeared in a British comedy movie called “Goodness Gracious Me”.

She was often hired for roles in radio plays like for the 1998 radio play called “Dancing Girls of Lahore”.

In 2002 she was hired for a role in a comedy-drama titled “Bend It Like Beckham” which brought huge attention to her and her performance.

She was happy about the possibility to work together with actors like Shaheen Khan. This series was considered as the breakthrough point for her and Keira Knightley.

This movie was made with a very small budget but managed to become a huge hit. It was praised by the critics and was a financial success.

In 2004 she became the face of Estee Lauder cosmetics which brought her financial benefit.

Nagra was nominated for several awards for this movie and has become the first woman to win the FIFA Presidential Award.

Her next project was a romantic comedy titled “Ella Enchanted” where she starred alongside Anne Hathaway.

Nagra also starred in two Channel 4 series titled “Twelfth Night” and “Second Generation”. She has received her first EMMA award on the latter.

That year was the first year she visited India because some of the scenes were filmed there.

Nagra was very happy to hear that one of the producers of ER is very interested to meet her for the role of a new character entering the new season of ER. Nagra accepted the role with great pleasure since she was a huge fan.

She appeared in the 10th season of the series as a medical student Neela. She was soon accepted as a top actor and started been referring to as one of the ER’s Golden Girls.

She stayed in the series until the very end in 2009, after the departure of Noah Wyle, Maura Tierney, Goran Višnjic and more.

She was awarded an Asian Excellence Award in 2007 for her role in ER.

In 2005 she appeared in Amit Gupta’s movie “Love in Little India”.

She gave her voice to the character Cassandra in the animated movie titled ” Batman: Gotham Knight”.

In 2012 she appeared in several episodes of sci-fi drama Alcatraz which aired on FOX.

In 2013 she joined a known NBC series called “The Blacklist” as Meera Malik, the agent of CIA. She starred in it until 2014.

In 2016, she was cast into a British thriller series “Fortitude”.

She was in a five-year-long relationship with Kieran Creggan, an Irish actor she met while filming “Fair Ladies”. They lived together in London until the breakup.

In 2002 she started dating a photographer James Stenson.

She married him in 2009, in the presence of her best colleagues from the ER.

In the spring of 2009, she gave birth to Kai David, the only child from this marriage.

Parminder and James divorced in 2013 and separated two years earlier.

The divorce was very ugly and the estranged former partners fought over their finances.

In 2004, she bore the Olympic torch on its way to the Summer Olympic Games in Greece.