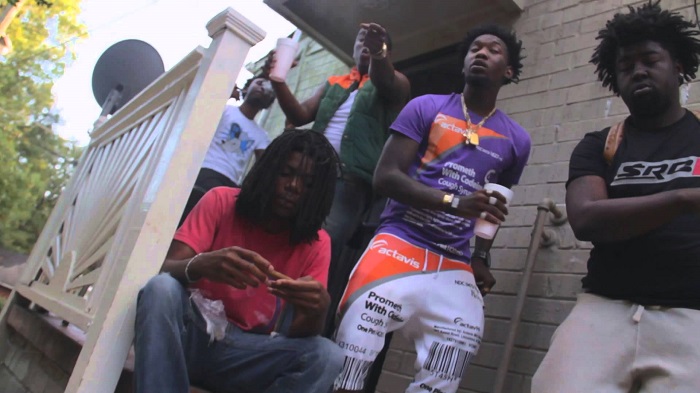 Offset is the stage name for American rapper who co-founded rap group “Migos” with his two cousins. Migos made the hit single “Versace” that ruled the hip-hop charts in 2013 and more recently published second hit album called “Culture”.

Offset was the center of controversy with other members of Migos after he has spent some time in jail. Read about what happened to get Offset in jail, how it affected his music career and his net worth.

Offset was born as Kiari Kendrell Cephus on the 14th of December 1991 in Lawrenceville, Georgia where he was raised together with his two cousins Quavious Keyate Marshall, AKA Quavo,  and Kirshnik Khari Ball, AKA Takeoff. The cousins developed an interest in rap and hip-hop in the seventh grade and began making their own songs.

In 2009 the three cousins formed a hip-hop group and called it “Polo Club”, but a year later they changed the name to “Migos”.

Migos had published two mixtapes before their career took an upward turn in 2013, with their viral hit “Versace”. The song made it to the Billboard Hot 100 chart of US. Their next mixtape “Young Rich Niggas” became the 27th best album of the year 2013.

Mixtapes that followed (“No label 2” 2014, “MigoThuggin” 2016, and “Young Rich Niggas 2” 2016) were all instant hits generating positive reviews from both the critics and the audience.

Their first album “Yung Rich Nation” that came out in July 2015 reached number three on Top Rap Albums chart. Their second album “Culture” came out in January 2017 and reached the spot of number one on the US Billboard 200.

Offset’s personal life is full of controversy. He is in a relationship with hip-hop recording artist Cardi B since January 2017. Two of them appeared together in the video for her song “Lick”. Offset was romantically involved with famous beautiful women: the ex-wife of Wiz Khalifa, Amber Rose, model and dancer Alexis Sky, social media star and model Ayana Charm. He is a father of a two-year-old boy called Kody. The boy’s mother is Offset’s former girlfriend Oriel Jamie.

American hip-hop artist Shya L’amour recently revealed that Offset is the father of her daughter Kalea. Media quickly noticed that both of Offset’s children were conceived in about the same time. Offset did not confirm nor deny the paternity, but Shya called him out in social media for not taking care of his daughter.

Children: Two, a girl Kalea (alleged) and a boy Kody

Distinctive Features: Goatee beard and face tattoos of a Christian cross and the Eifel Tower

Offset was arrested in April 2015 with 12 other associates of Migos for possession of marijuana and firearms. A month later Offset received additional charges for attacking an inmate in the custody. He was released in December 2015 after a plea deal and paying a fine. He is currently on five years of probation. In 2016 he was caught driving without a proper license.

When Offset was locked up his cousins set aside 1/3 of their earnings for him, even for those shows he had missed. So when he got out there was a lot of money waiting for him at home.

Offset, born as Kiari Kendrell Cephus, is American rapper who performs in the rap group “Migos” with his two cousins. Migos became known for hit single “Versace” in 2013. Recently they published a second hit album “Culture”.

Offset was the center of controversy with other members of Migos after they got arrested for possession of marijuana and firearms in April 2015. Other members of the group got out earlier but Offset had spent some time in jail after receiving additional charges for attacking an inmate in custody.

The rappers net worth is estimated at $2 million. He is dating hip-hop recording artist Cardi B since January 2017.

He recently launched a fundraising campaign to raise $500,000 for the American Cancer Society, honoring five years of the death of his grandmother who died of bladder cancer.