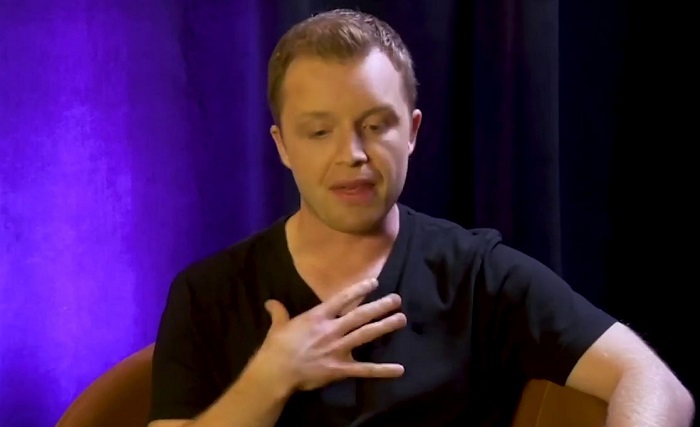 Noel Fisher is a popular young actor hailing from the state of Canada.

He is known for his character of Mickey Milkovich in a world popular TV series titled “Shameless”.

He is also known for his role as Cael Malloy on a series called The Riches and as Ellison “Cotton Top” Mounts on a miniseries called Hatfields & McCoys.

This miniseries won an Emmy award and was a big success.

He was also Vladimir, a vampire in The Twilight Saga: Breaking Dawn – Part 2, a final movie of this series. This made him very recognizable in the movie business.

Noel had many smaller roles on TV like those in Lie to Me, Law & Order: Special Victims Unit, Bones and Criminal Minds: Suspect Behavior.

Noel was born on March 13th in 1984 in the city of Vancouver, located in British Columbia in Canada. His full name is Noel Roeim Fisher.

His father is Ron Fisher and his mother is Linda Leonard Adams. He has a younger sister Raena Kai Fisher with whom he is still very close. She works in a consulting group today.

He went to the Gladstone Secondary School in Vancouver and even there he showed great interest in Arts.

When he was only 14 years old he started acting and had a role in The Sheldon Kennedy Story. In this journey of self-discovery, he did a lot of acting lessons and also fell in love with playing the piano – which he ultimately studied for 8 years.

His debut in The Sheldon Kennedy story was in 1999. This movie is a sports drama inspired by Sheldon Kennedy who is a former professional ice hockey player from Canada. He played the role of young Sheldon Kennedy and received a Gemini Awards nomination for it.

He was nominated for the second time for this award in 2005 when he did a TV comedy-drama called Godiva’s. In it, Noel played TJ, a busboy who is often rude to everyone.

In 2001 he was in movies such as Valentine where he had a small role as a gang member, Freddy Got Fingered where he was a manager and Max Keeble’s Big Move where he had the role of Troy McGinty.

In 2003 he was in Final Destination 2, a horror movie in which he had the role of Brian Gibbons, a teenager who is a son of a farmer.

This is one of her first roles in an American movie because he always did Canadian ones. In March of 2007, The Riches started airing on FX. It’s a TV drama and on it, he plays Cael Malloy, the oldest Malloy son who is often quiet but very clever and smart.

The same year he was also in A Guy Thing and Agent Cody Banks where he was Fenster.

In 2006 he was in Pope Dreams as Pete. This movie received a lot of awards at various film festivals.

In 2007 he was in After Sex, a romantic comedy as Jay. In this romantic comedy-drama film directed by Eric Amadio, he starred alongside Mila Kunis, Jane Seymour and many other young and popular actors.

In 2008 he was in Red, a thriller movie in which he played Danny McCormack. He co-starred Bryan Cox and Kyle Garner.

In 2011 she started playing a role in Shameless, an American comedy and drama series. It is an adaptation of the same-named British series.

In it, Noel plays a character of Mikhailo “Mickey” Milkovich, Mandy’s brother and a thug who is actually gay and has a relationship with Ian Gallagher.

He was also in an American drama miniseries called The Long Road Homemade by the National Geographic. There he plays the role of Tomas Young, a soldier that finds himself in a battle known as the “Black Sunday”.

In 2011 he was also in Battle Los Angeles, a military Sci-fi movie, as Shaun Lenihan. This Jonathan Liebesman movie was made with a huge budget of $70 million but it also cashed in over $200 million.

He starred in this huge action blockbuster alongside Aaron Eckhart, Michelle Rodriguez and more.

In 2012 be appeared in The Twilight Saga Breaking Dawn – Part 2 as Vladimir.

In 2015 he voices Batman Unlimited: Monster Mayhem where he played Gogo Shoto.

In 2018 he voices Simon Picard in A Yeti Adventure.

In 2019 he started shooting Fonzo, a biographical movie about Al Capone where he will be Junior, Al Capone’s son.

He also voiced Brainiac 5 in Justice League vs. the Fatal Five.

In 2019 he returned to the cast of “Shameless” which made the fans of the series go wild because he was one of the favorite characters in the show and his on-screen romance with Cameron Monaghan and his performance made him being voted as one of the best actors in the series.

He was in numerous TV series too.

In 2000 he started playing a character in You, Me and the Kids. He played Aaron. He also started voicing X-Men: Evolution series that year as Todd Tolensky.

In 2002 he started voicing Hamtaro on English.

From 2001 to 2002 he was in Sk8 as Alex. It was a teenage drama series which aired on NBC. It was aired in only 13 episodes before being canceled for poor ratings.

In 2004 he was featured in an episode of Two and a Half Men as Freddie.

In 2006 he was in an episode of a series titled Medium, which was at that time one of the most popular TV series.

In 2008 Noel was featured on Law & Order” Criminal Intent, The Mentalist, and Life, but all of the roles are small.

In 2009 he was in an episode of Bones as Teddy Parker and he was also in 4 episodes of Law & Order: Special Victims Unit as a Tech Dale Stuckey.

He was in an episode of The Pacific, Terriers and Lie To Me in 2010.

In 2011 he was in Criminal Minds: Suspect Behavior as Jason Wheeler.

From 2016 to 2017 he voiced Klarion the Witch Boy in the Justice League Action series.

In 2017 he was in an episode of Fear the Walking dead as Willy.

He was in a CBS series called The Red Line in 2019 as Officer Paul Evans and was also in a Hulu series titled Castle Rock in 2018 as Dennis Zalewski.

He was nominated for a Kids’s Choice Award twice, once in 2017 and once in 2016 for the Teenage Mutant Ninja Turtles movie.

In 2005 he met Layla Alizada, an actress, on a set of Godiva’s series. They felt an instant connection and started dating.

Layla is also an actress like him but her roots are in Afganistan. She has appeared in many American series like “Castle” and “Scandal”.

When they were on a vacation at the St. Regis in Bora Bora in 2014 he asked her to marry him and they became engaged. After three additional years, they married in their backyard in Los Angeles in July of 2017.

They made their wedding very private, sharing it only with their closest friends and members of the family.

They worked together several times. The last was in 2016 when they both appeared in a short movie titled “Day One”.

They are both animal lovers and have two cats with very funny names: Sushi and Spartacus. They would like to have more but they don’t have enough time to take care of more.

Fisher is often questioned for his sexuality because of his character Mickey from Shameless who is gay but Noel is openly straight.

He said that he doesn’t look at his Mickey as a gay character but rather as a regular person.

In his free time, he loves to play video games and he often does so with his wife.

He has been sponsoring a little girl from Zambia since he became more known after the first season of Riches. He thinks it’s one of the most rewarding things you can do.

An interesting fact is that he couldn’t be there for a final audition for his Shameless part and because of it he filmed his audition from 3 different angles and sent it to John Wells, the executive producer. It turned out that he could actually be on the audition because Mr. Wells hasn’t left yet. He got the part.

Noel still has his first-ever car he bought back in 2002 and he says that he doesn’t have the heart to sell the car because of all of the memories he links to the car.

When Noel auditioned for the role of Cotton Top, a character that is originally albino, in Hatfields & McCoys, producers thought he was wearing makeup to make himself so light but he then explained to them that it’s just his face.