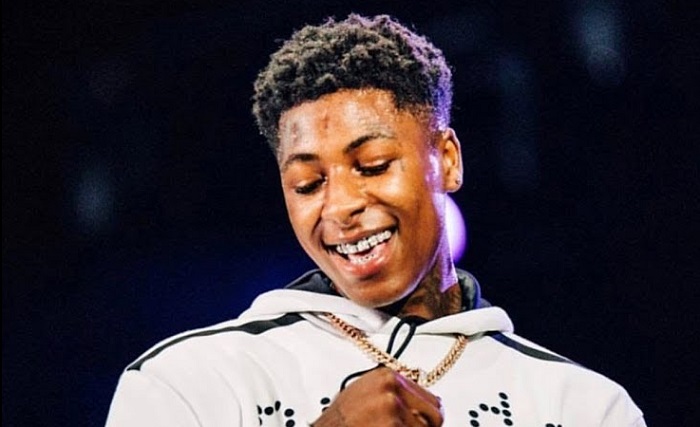 NBA YoungBoy often called only YoungBoy, is a very young American rapper and a songwriter whose hit „Outside Today” rose him to the top of American charts in 2018.

He is known for his various criminal charges which stopped him to enter the XXL. He has a very long and painful history of issues with the law and creating controversies.

NBA YoungBoy was born as Kentrell DeSean Gaulden on October 20, 1999, in a town of Baton Rouge, which is the capital city of Louisiana state in the United States. He is very thankful for the opportunities that he got because he was born there and he said that he would probably have a much harder time succeeding in life if he didn’t have those.

Kentrell had a very rough childhood and has been raised in a family with a very low income and in a part of Baton Rouge where crimes were committed on a regular basis. This left a huge impact on his life and he created a very weird and a very fragile relationship with his family.

He was a toddler when he broke his neck in an accident which almost took his life. The consequence was that he had traced for a very long time so that his hurt spine could heal. This head brace made scars on his forehead which he still has. He doesn’t mind them at all today but when he was younger he was dissatisfied with it. He always needs to pay attention to his posture in order to remain healthy. If he doesn’t take care, he can encounter much larger problems.

His father was involved in a lot of criminal acts so he was often having problems with the police. He was very young when his father was convicted to a very long prison sentence in a period of over 50 years. That is why he was raised by his grandmother (from his mother’s side) since his mum didn’t live with him and dad was in jail.

His mother left him and his two siblings and started her own life away from them with her new boyfriend whom she later married. She just recently entered her son’s life. It was very hard for him to rebuild good relationships with his family members.

He was a student at Scotlandville Magnet High School. After Kentrell entered the 9th grade he decided to get out of school and he explained to everyone that he decided to make a career in music. But unfortunately he went another way and he was arrested while participating in a robbery.

Kentrell was sent to Tallulah’s detention center in Louisiana. He spent most of his time writing lyrics for his music project because he was serious to become a rapper but he didn’t have the money to produce his music.

He was released from there but he didn’t have a place to stay after his granny died of a heart attack. Sherhonda Gaulden, his mother, wasn’t an option so he moved in with NBA 3Three, his friend and a rapper who also tried to rise in the world of hip-hop.

Lil Phat was his role model when he was a kid. He developed a really close relationship with his work and wanted to be more like him in life.

They were both very interested in making music but they just didn’t have the money for it so they got involved in several crimes like robbery. They used the money to pay for their time in a music studio.

They were more cautious and smarter this time so they were never caught while doing these criminal activities. However, it isn’t really good that he is doing these things either way.

He was only fourteen years old when he bought himself a microphone from Walmart so he could make rhymes. He did it most of his free time and has spent a lot of time in the studio. His friends soon noticed that he was interested in creating music and they were very supportive of his hobby.

In 2015 he got involved in a beef with Scotty Cain, who is also a rapper from Baton Rouge. They went so far that they made death threats to one each other.

This was pretty childish, but they got over it eventually. The thing is, it was really easy to get into trouble back in the days, and the duo did it for attention.

In 2016 he has released a mixtape named „38 Baby” and this was his first successful project which draws attraction. The mixtape was made in collaboration with Boosie Badazz and Kevin Gates who were both from Baton Rouge. He was very happy that he finally got a platform to work on.

At the end of 2016, he has released „Mind of a Menace 3“. This one wasn’t as successful as his previous work, but he still continued to grind and create because he knew that he’ll be getting quite some attention again.

In 2016, YoungBoy had a major issue with the law when he got arrested as a suspect for a murder on the 1st degree, as a participant in a drive-by shooting.

Although he claimed that he didn’t have anything with it he later changed his statement. Many of his fans were very sad to see that he was becoming one of those rappers again.

He was incarcerated in his home town where he released two more mixtapes. He said that it was actually pretty good inspiration and that he’s thankful that people were trying to bring him down.

In spring 2017 he was released after taking a plea bargain and paying bail. His plea bargain was not well received amongst the public.

In the summer of 2017, he has released a music video for his song  „41“ which became very popular since it featured several known rappers such as Meek Mill and Young Thug. He also released a new mixtape which entered the Billboard 200 under the name „A.I. YoungBoy“. Other popular singles from the same mixtape are named „Untouchable and „No Smoke“.

„Untouchable“ was seen on YouTube by 97 million viewers. This is one of his most popular works to this day.

He announced his state tour at the same time. He was happy to finally meet up with his fans after being secluded for them for a long period of time.

NBA YoungBoy signed a contract with Atlanta Records at the end of 2017. He soon announced the release of his first album which came out in spring 2018 and was titled „Until Death Call My Name”.

He was arrested again in 2018 but he was released one month later. This time he physically abused his girlfriend which was caught in the camera.  He started to act dumb, but many of his fans decided that they didn’t want to support him anymore and that he is now a part of history.

In May 2018 he has released his new mixtape named „Master The Day of Judgement“.

He has released four EPs through the same summer and they were later joined into one compilation named „4 Respect 4 Freedom 4 Loyalty 4 What Important“.

At the end of the same year, he has released another mixtape called „Decided” where he made a collab with Trippie Redd. His last tape was „Realer” with Lil Baby as a guest.

As for his first arrest where he was accused of being involved in a drive-by shooting in 2017 he was found guilty and he made a deal which brought him a 10-year prison team on suspense and 3 years of probation.

His second arrest at the beginning of 2018 ended up in his prison bail payment of $75,000 after camera filmed him assaulting Jania, who was his girlfriend at that time.

YoungBoy had a lot of relationships with a lot of women and has 5 sons with four of them. he started hanging out with women when he was a young teen.

Kayden, Kacey, Kauri, Kamron, and Taylin are the names of his sons he has with those women. He isn’t a really supportive father and that’s something that all of his girlfriends (ex-ones) can confirm. There was always some trouble with the fact that the children „may not be his”.

YoungBoy had a younger brother named Ken and an older sister named Telee with whom he spent his childhood. They are still very close to each other.

His former girlfriend Nisha gave birth to his son Kayden. This was an emotional moment for him, but it didn’t last long until he forgot about both of them. Actually, it took only until he found someone new.

His second son who was born in 2016 was conceived in a relationship with Starr Dejanee. This brought a huge controversy later when it was found out that the kid wasn’t really his. He made a DNA test which proved he is not the father. By that time he already falls in love with Baby K and he still helps his mother financially.

His son Taylin is the consequence of his one-night affair with a girl named Niya. The son is also called Tay Tay and he often posts photos of him on his Instagram.

One of his latest relationships was with Jania Boania who is a model and an Instagram celebrity. She gave birth to his 5th child. His name is Kacey Alexander.

People believe that today he is in a relationship with Jania Jackson but they were involved in a lot of controversies.

She was filmed sleeping in the hotel lobby in 2018 and it went viral.

Also, a video of him slamming her went viral and although there was blood on the floor she has denied it when the police came.

Kentrell was also accused of sleeping with a groupie.

His mother Sherhonda rapped as a teen and she was the one to inspire Kentrell to make a music career although she left all three of her children to live with their granny. She was a cashier and lived her life distant from him but she came back to his life recently. She got married to a chef named Joseph Ross in 2015.

After living her job as a cashier she started working as a stand-up comedian and does live shows in the Baton Rouge area. She also posts a lot of her comedy videos on her Instagram channel which is tremendously watched and liked. She uploaded a video where she surprises her son in the bathroom and it gained over 50k views.

He is a very big fan of shiny jewelry so he can often bee is seen wearing gold chains and bracelets. he considers money to be his greatest achievement after the poor life he had earlier.

He also seems to love his children very much and that he spends a lot of time with them.

He is followed by over 6,5 million followers on Instagram where he often uploads his photos.

This Baton Rouge rapper got arrested again in February 2019 arrested at the Hyatt House Hotel in Atlanta. He and the woman who was with him got into an altercation with the staff which ended by the NBA being arrested.

They were booked and released on bail until the trial will start.