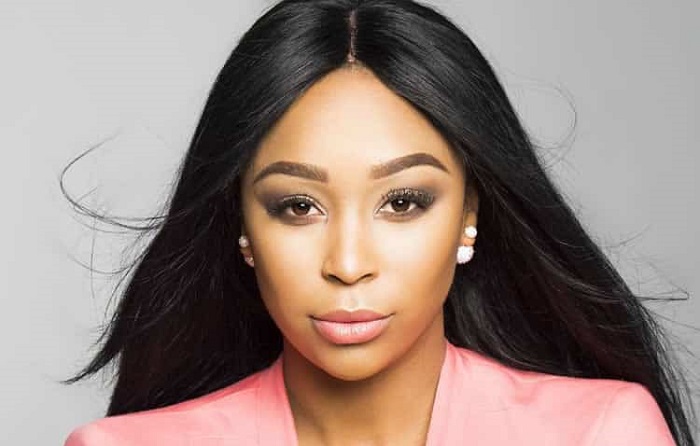 Minnie Dlamini, mostly called Minnie, is a very popular South African actress and a presenter who got widely known for her work as the host of a live music show called “Live Amp”. She has been very famous in her country but has been getting international attention lately as well.

She has a huge fanbase with over three million followers on her Instagram account where she posts regularly. She says that it’s a very easy way to communicate with her fans.

She was born as Minenhle Dlamini on July 7, 1990, in Durban, the 3rd biggest city in South Africa located in a South African province titled Kwazulu-Natal. She says that this place feels like home and no other place will ever be like that, no matter where in the world it is.

She was raised by her loving parents Queen and Jabulani who were very supportive parents to Minnie and always hailed her ambitions in education and her interest in media. Without them, she says that she wouldn’t be as successful as she is today so she thanks them very much.

She was a student at Northlands Girls High School located in Durban. After graduating from this high school she enrolled in the University of Cape Town. She wanted to pursue education and she believes in it very strongly.

She chose to study drama, film, and media because she was always very interested in everything connected to media and movies. She said that it was her passion and that she loved every single aspect of this art.

While she was a student at this university she started presenting on television. Before her debut as a presenter, she made several cover stories of “Youth Day”. Her first work as a presenter was for LIVE in the summer of 2010.

After that, she was hired by the SABC network to co-host their morning show called Mzani Insider. This shows theme was a lifestyle and she was a great host for that niche. She is beautiful and also very charismatic so people in the media loved her very much.

In 2012 she decided to quit the show because she decided to try herself in acting and make her career in that part of the media. It was a hard road to go over, but she was determined to succeed.

However, she still became a sports broadcaster the very next year when she started working as a co-host of Soccerzone. She co-hosted it with another sports broadcaster named Thomas Mlambo. She stayed in this workplace until 2016.

Minnie was often chosen to present important events like FM Music Awards, PSL Awards and Film, and TV Awards. Her first acting role was in a soap opera aired on SABC 1 TV. The name of the soap opera was “Generations”. She guest appeared in this series playing the role of Miranda. After she became popular she was given the lead role in a soap opera called “The Wrld”. She also gained a lead role in the Rockville series.

During the time she was focused on her acting career and working as a presenter she also worked in modeling since she is very beautiful and has a great figure. She said that she is grateful for all of the gifts she has been given and she wants to create an interesting space in all industries.

Minnie became the new face of LEGit, a South African Store. She started to appear more on TV shows and in magazines, which introduced her to new audiences. This was important for her because she had to get her name out there.

She gained her fashion clothing line named “Minnie-Series”. It was a very interesting project and she said that she felt like doing another one soon.

In 2015, she presented a wedding TV show called “Our Perfect Wedding”. This show was produced by Connect TV and aired on Mzansi Magic.

In 2016, she presented the “Home Ground” show. In 2017, she starred in a mini reality TV-series called “Becoming Mrs. Jones” and gave her fans a view of her personal life.

It is made in 3 parts and if covers time before Minnie is also a very kind person and she is a founder of the Minnie Dlamini Foundation focuses on helping the South African Youth. It is focused on enabling them better education so she had provided 25 girls with education sponsorship.

This docu-series became very successful and has extremely high ratings, one of the highest ever in the history of Vuzu Amp. She was very proud of it and said that she would love to get more involved in this genre.

In the summer of 2015, she began sponsoring over 20 students paying their educational bills. This was a huge inspirational moment for her and she said that she knows how hard it can be to grow up in her home country, so she wanted to provide these girls with a better future.

She made her first million when she became the face of LEGiT. It was a huge thing for her but she later confirmed that she had spent the money so quickly that she was shocked by it.

She has her own media production house called “Beautiful Day Production” which she runs together with her husband. She said that she finds great support in him and that she is very thankful that he’s not letting her give up on her dreams.

She released her new skincare product line named MD Body. She had worked on it for five years and had ups and downs until she found the perfect formula. She is very caring and likes to be a perfectionist when it comes to her brand name!

She emphasizes that her skincare products are affordable, but they are still filled up with high-quality ingredients. She always points out how she wouldn’t sell what she wouldn’t use herself. That’s important in her marketing technique.

She currently hosts a shoe called Homeground in which she has interviews with celebrities live in the studio of Mzansi Magic.

As for her personal life, she got married in the summer of 2017. Her husband’s name is Quinton Jones. They had a very traditional marriage in Durban and Minnie has said that this was one of the most beautiful moments in her life.

Her wedding dress was very beautiful, covered in thousands of Swarovski crystals. The dress was designed by Gert Johan Coetzee and it was a true masterpiece, which everyone that attended the wedding agreed on.

Minnie got introduced to Quinton in 2014 when she relocated to Johannesburg but they kept their relationship quiet for two years.

When they met they were both in relationships and they were friends first. Her husband is very romantic and he proposed her on one knee in the sunset.

He also bought her a beautiful wedding ring which was designed by Jenna Clifford, a very skilled jewelry designer from South Africa.

In 2018 they were in their car when the robber forced them to give him their money and pricy possessions. Her wedding ring eas stolen then but it was insured so they gained a new one.

Her husband works in TV production and they are handling their production company together.

Her husband and she love to spend time outdoors but they also like to be at home doing things together, like cooking. Her husband is a great cook.

Before getting married to Quinton she was in a relationship with Humeleng Khune who was a goalkeeper of Kaizer Chiefs. The pair parted ways in 2014.

Minnie went through a tragedy in September 2019, when her brother Khosini who was only 29 years old, died. He died of a ruptured brain aneurysm and was in a coma for weeks.

This was very painful for her and she thanked all the people and members of the family for their support.

She is a huge fan of movies and her favorite actors are Chris Hemsworth and Emma Stone.

White, black and pink are her favorite colors so she has a lot of wardrobe in that color.