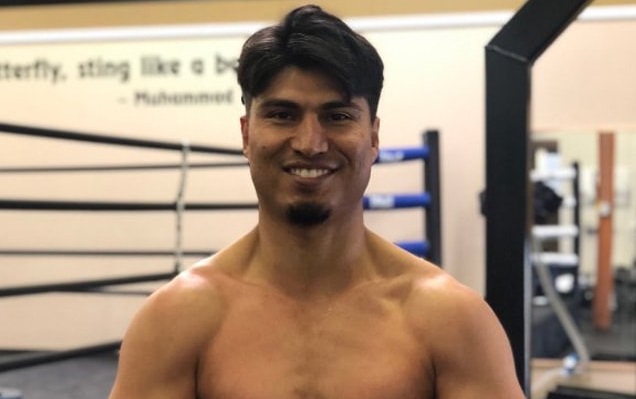 Singers and actors are not the only celebrities we know. Among many of the pople who are constantly in the public eye, many of them are athletes and people from other branches.

In today’s text we are going to talk about such a celebrity, who is not famous for his singing talent or acting skills, but for his talent in the ring.

In today’s text we are going to talk about Mikey Garcia, a famous American boxer.

We are going to talk about his net worth, biography and career, so if you are interested to find out more about this talented young man, this is a perfect opportunity.

Miguel Angel Garcia Cortez was born on December 15th 1987 in Oxnard, California. His father Eduardo was a boxing trainer and also an amateur boxer. He worked at the La Colonia Youth Boxing Club. Mikey’s brother Roberto is a professional boxer and an IBF Super Featherweight Champion. He lost his belt to Diego Corrales.

Mikey’s older brother Daniel was also a trainer and a boxer. He comes from a very athletic family, and most of his childhood he spent training and practicing with his father and brothers.

Even though he tried to say off the street and be a good kid, he admitted that he did grow up in a neighborhood that is related to gangs. But, luckily his family kept him away from bad influences.

They all worked as strawberry pickers and earned for life that way. Garcia admitted that his childhood wasn’t perfect and full of wealth, but he managed to grow up as normal as he could. There aren’t any more information about his childhood, so we are going to move forward to his career and net worth in the next part of this text.

Garcia started boxing with his father and brother. Boxing was simply in their family and they enjoyed being active and playing sports all the time. His amateur career started when he was only 14 years old. In 2003 he managed to win the silver medal competing at the National Junior Olympic Championships under the 125lb group.

In 2006, Garcia turned pro. He managed to perform in total of 20 fights and 17 of them were knockouts. In the USBA Featherweight Championship he defeated Tomas Villa by a knockout. Under the Featherweight division, he fought against Salido, Lopez and several other less known names.

In 2013, he joined the super featherweight, and fought against Martinez and Burgos. In 2014 he entered into a legal dispute with the Top Rank over the purses. This ended in a settlement in 2016 and Garcia and Top Rank managed to make a new deal.

In 2016, Garcia entered the competitions as Light Welterweight and fought against Rojas, while next year he got back to Lightweight in the fight against Zlatičanin. In 2017 he returned to light welterweight in a fight against Broner and Lipinets.

In his rich career, Garcia managed to reach a great success in the ring. He had a great teacher in his father and he definitely learned everything he needed to know about boxing. Garcia is not done winning and his plan is to become one of the most famous boxers of all time.

Last August, when Mikey arrived in Mexico City accompanied by his father Eduardo and his brother Robert, who is his coach, he was awarded his green and gold belt by the president of the World Boxing Council, Mauricio Sulaiman, announced Errol. I was the one I wanted to face next.

Robert publicly disagreed with his younger brother and said that there are still good fights in the lightweight division, before taking the next step of changing fate involving Errol. But Robert also stated that, if that was what Mikey wanted, he would devise a strategy to defeat the splendid southpaw.

Although Mikey will be reinforced by Victor Conte’s physical conditioning, the fact is that he is yielding three and a half inches in height and four inches in range. It is a powerful and bold bet for Mikey, who started out as a featherweight. It will require an excellent lateral movement a lot of skill to defeat Errol, who is a chilling puncher in his own right. It is the third defense of Errol and comes with twelve KO in a row.

We remember 3 illustrious boxers who have bet a lot on upgrading. In their glorious epochs coinciding, Sugar Ray Leonard plus Roberto Duran and decades before, the late great Mickey Walker have climbed the divisions of “Serpents and stairs” to reach the amazing glory. But nothing big is easy.

Before his wonderful win in the last round over Wilfredo Benitez for the WBC welterweight title, Ray risked rising to middleweight, and had a really tough but little-remembered fight against Mexican national middleweight champion Marcos Geraldo. . Higher and appreciably heavier, Marcos had Ray in trouble in the third round with a huge right hook. As the fight progressed, Ray, increasingly dominant, downloaded his entire repertoire.

When Ray fought for the WBA super welterweight championship against Ayub Kalule, the so-called lefty but physically stronger lefty raised problems until Ray hit a big right hook towards the end of the ninth round, then followed a combination hardest of the left right he dropped, hitherto undefeated Ugandan eight seconds before the bell. The referee, fortunately, intervened to save him, even though the round was over.

In the 20s, the also great Mickey “Toy Bulldog” Walker, who was world welterweight champion, dared to face the resilient middleweight champ Harry “Pittsburgh windmill” Greb, losing by decision. The legend says that the couple continued with their fight, but without gloves, later that night in a nightclub.

Mickey had learned the lesson to the bad, the bigger they are … the stronger they hit … they do not fall! Eighty-six years later, Mikey Garcia also seeks to make history in a difficult and tough test against probability. The best in your weight division against a bigger and stronger quality opponent. Mikey’s keys to winning is movement, choosing his punches and not going from start to finish in a fight. Only the best are willing to take such a complicated test.

Mikey’s net worth is estimated at around 4$ million. Considering the fact he is still planning on competing and winning, we can expect this net worth amount to rise even higher in the next few years. Mikey is also active on his social media and liked engaging with his fans. He has many followers on his Instagram, Twitter and Facebook accounts, where he often shares all things he is proud of, such as his titles and wealth.

The Garcia brothers never had doubts about their identity. Since children Mikey, four times champion in different divisions, and Robert, former champion and famed coach, they knew Mexicans, although born in the United States, as if it were a geographical coincidence. That was what their parents, originally from Michoacán, told them, but they also confirmed it with family roots, food at home, customs and, above all, language. Spanish has always been his first language.

We regret many times that in Mexico they do not see us as Mexican boxers, says Robert; My brother and I were born in California, but we grew up as Mexicans, Spanish is spoken at home with the family, but sometimes it is difficult for us to be recognized as countrymen to whom we were born on this side of the border.

Mikey has a much respected career in the United States, where he is considered an emerging figure. This Saturday he will face Errol Spence Jr in the Dallas Cowboys Stadium, a huge challenge, as he will try to snatch the welterweight title of the IBF, for which he climbed two divisions. It’s a very complicated challenge, Robert admits; climbing so much may seem like a disadvantage, but Mikey has taken great care of this step and we are confident that he can give a great fight in this division, to get the fifth championship in a different category.

Robert thinks that this fight can define one of the great figures of the immediate future. Both are undefeated and their reputation grows in every fight. There are many fighters who make their way and are forging respectable names, warns Robert; but I think that from this lawsuit can emerge a figure that will be the protagonist of great moments.

Robert confesses that his brother would like to appear among the historical names of world boxing, but also be on the lists of the best Mexican fighters of all time. Both list their references, from the boxers to the most recent ones like Juan Manuel Márquez, Erik Morales, Julio César Chávez, among others. “Nobody can doubt that the star of the moment is Canelo Álvarez,” admits Robert; but we would like that in a short time the Mexicans are proud because they also have Mikey García and we are working so that at some point they see that we are the same.

The García family has no doubts about its origin. They rise to the ring with the surname embroidered on the clothes, with traditional Mexican music and waving a tricolor flag. Don Eduardo, the father who arrived undocumented in the United States so many years ago, and Robert assisting Mikey, both born in California, all convinced that being born on the other side of the border does not change their identity.

Being born on this side does not make us less Mexicans, Robert says with conviction; winning on Saturday we would also like it to be seen as a victory for Mexicans.

We believe that little by little they will be recognizing it, it is important to make community, especially with what is lived in recent years here on this side.

Mikey was a part of a summit for brain health, with this subject being very important for everyone who is in sports similar to boxing where head injuries are a reality.