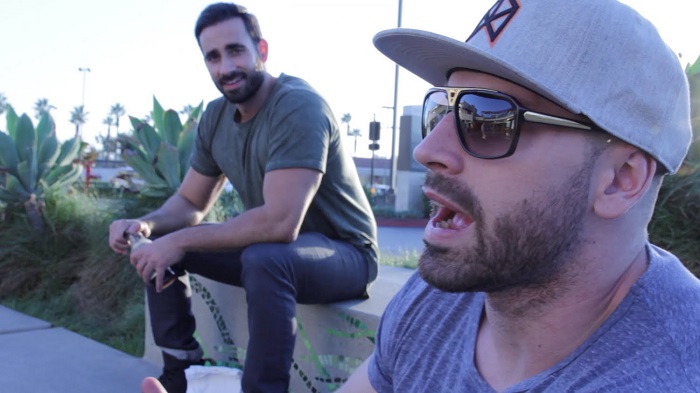 Mike Tornabene is an actor and a sketch writer who became popular because of his character “Dom Mazetti” from the series of sketches uploaded on YouTube.

There aren’t any information about Mike’s childhood, his family and friends before the period of hishigh school education.

Mike Tornabene and his partner Gian Hunjan have met in the second grade of high school. They both had a thing for Nike trainers and that connected them in a weird way.

They worked together in a restaurant on the last year of school and every night they performed in front of the kitchen staff after closing time. They did comedy sketches and by the reaction of their colleagues they saw that they are very good as a comedy pair. They started to act together as a duo and trained their acts better so they could later upgrade.

Although they separated during college, because Mike went to New York University and Gian went to Temple University, they never lost contact. Just the opposite, they started writing their first comedy screenplay and used video chat as a way of communication. Their friendship was never forgotten and their special bond was preserved.

By the time they finished college they had already written a screenplay and a pilot comedy project.

In 2009 they made a Facebook page named “Mike and Gian Comedy”. The page needed a bit of time to get recognized amongst the nation, but as soon as people saw their videos and posts, they started to love them and they got more and more subscribers.

They made a website and uploaded their sketches on YouTube with their first series “The Intern”. Gian acted as an intern in these videos.

They both graduated in 2010 and started working anything they could find trying to collect the money they needed for moving to the city and trying to sell their screenplay. They were very dedicated to the idea of becoming famous in comedy.

Mike graduated from NYU Tisch School of Arts with a degree in Film and TV. It is a difficult study.

Gian graduated in Finance,  although he knew that his call is comedy.

At that period Mike also studied for his personal trainer exam.

They moved to Upper East Side at the end of the year. They both found dayjobs and by night they were working on their comedy sketches. It was very time consuming and hard,  but they had an idea they loved.

After a while, they created a character called Dom Mazetti. Originally he was supposed to be a dumb Italian in a cooking sketch. At the end they used Dom as a character who will talk about many important things in a satirical way. First Dom dealt with a bomb scare which brought them good feedback.

Then they started to put Dom’s videos almost every fortnight and after a while they decided that Dom is gonna be their main character and that they will focus on him.

Especially poular Dom’s episodes were the one talking about their life in college.

Their most popular channel is called “BroScienceLife”.  Dom id an Italian-American collegge student who speaks up about various themes such as women, fitness, money and even politics.

He is currently in a relationship with Leah Marie Deming, a freelance graphic designer who is a digital and social marketing manager at Trainor Associates.

He claims that he is happy with his relationship and that his wife is very supporting of whatever he decides to do or whoever he decides to become. He plans on settling once he has enough money,  because he wants to spend a part of his life with his wife alone, happy and relaxed.

They put a lot of their photos on social medias and Mike always tries to be romantic in them. Although he has a hard time dealing with multiple tasks he has daily, he always finds a bit of time for his wife.

He trains at the gym for a very long time, since he was 14 years old. He has his own workout and he follows the schedule he made himself.

Sometimes he films his workout and posts it on YouTube. He filmed one with another famous person, Bradley Martin. Bradley is a known YouTube star and this gained Mike a lot of popularity.

Mike published a book in 2016 called “The Swoly Bible: The Broscience Way of Life” under his known pseudonim Dom Mazzetti. He invited his fans to buy the book so that he could become the first illiterate best selling author ever. The book speaks about fitness and gives lifestyle advices in a satirical way.

Mike Tornabene is a famous American YouTube actor known more by his character Dom Mazzetti and his YouTube channel “BroScienceLife”.